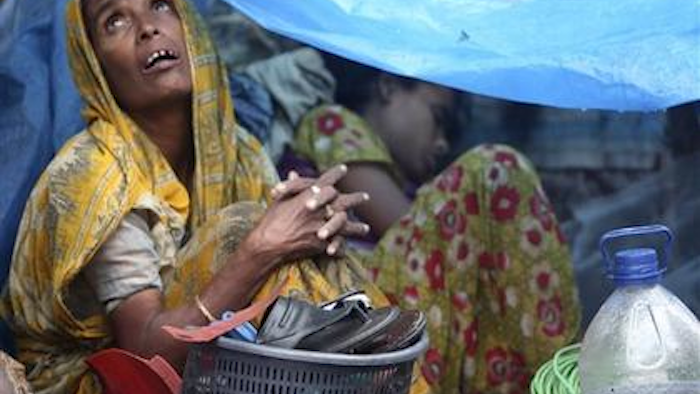 YOKOHAMA, Japan (AP) -- Challenges such as extreme weather, rising seas and worsening scarcity of drinking water are forcing many Asian governments to confront the changes being wrought by a warming planet even as some point to rich Western nations as major culprits.

Millions of people in the region have already been displaced by floods and droughts thought related to global warming, a United Nations scientific panel said in a report meant to guide policymakers and form the foundation for a new climate treaty due next year.

Scientists who back the Intergovernmental Panel on Climate Change say there is overwhelming evidence that carbon emissions from industrialization and energy-intensive modern lifestyles have driven an increase in the world's average temperature over the past century. Failed global efforts to significantly reduce emissions means that nations are now focusing efforts on adapting to a hotter earth.

Just as colonialism determined much of Asia's past, adapting to profound disruptions from climate change will determine the region's future, said Rajendra Kuma Pachauri, a co-chairman of the climate panel who has spent the past 26 years working on the issue.

"We have no choice but to start mitigating for climate change today," he said.

Asia's growing economic importance and rapidly urbanizing populations will give it a pivotal role in humanity's handling of climate change, said Saleemul Huq, director of the International Centre for Climate Change and Development at the Independent University in Bangladesh.

The climate report outlines in unprecedented detail the regional-level threat of conflicts, food shortages, rising deaths from diseases spread through contaminated water and mosquito-borne illnesses such as dengue and malaria. In a region where memories of past famines remain fresh, floods and droughts will likely worsen poverty while pushing food prices and other costs higher, the report said.

"There are so many Asian countries that are among the most vulnerable. We've seen so many extreme events hit Asia in recent years," said Kelly Levin, a senior associate at the World Resources Institute.

In Myanmar and Bangladesh, coastal farmlands are tainted by sea water from storm surges and rising sea levels, making soil too saline in key rice producing regions. In their seas, warming temperatures and rising acidity are killing off tropical coral reefs, endangering vital sources of protein.

"We are not primarily responsible but we are the victims of climate change," said Sandeep Chamling Rai, a Nepalese who is international adaptation coordinator for the World Wildlife Fund.

Even in wealthy, industrialized Japan, changing climate is expected to double the risks from floods and deaths due to heat and expand the areas affected by disease-carrying mosquitoes.

Assessing the risks for a region with geography that spans alpine plateaus to rainforests is daunting, especially given the lack of research on areas such as central Asia, said Yasuaki Hijioka, a lead author of the Asia section of the report.

Asia has not made as much progress as Europe and the U.S in assessing risks, Hijioka said. Western countries can draw up policies based on detailed research, he said. "In our case, we can only just show some case studies."

Yet Asia is not lagging in adapting to the changes already underway, said Huq of the International Centre for Climate Change and Development. Use of renewable energy already is expanding rapidly as countries seek to reduce carbon emissions and to counter the environmental degradation brought on by full-steam-ahead industrialization.

Progress is mixed, and it does not always depend on the wealth of the societies involved.

Having shut down all its nuclear reactors for checks following the March 2011 disaster in Fukushima, Japan has scaled back its targets for emissions reductions after ramping up use of coal, gas and oil to fire its thermal power plants.

Experts at the climate talks praised Bangladesh, one of Asia's poorest nations, for its efforts to reduce flooding risks by capturing silt to raise ground levels in its low-lying coastal areas and for building sturdy, multi-storied storm shelters that are credited with saving many lives from surging sea waters during cyclones.

India, the fourth biggest energy consumer and third-largest emitter of carbon, has begun to increase use of renewable energy, doubling its solar generation capacity in 2013, albeit from a modest level, and aiming to generate 15 percent of its power through renewable energy by 2020.

China, which years ago overtook the U.S. as the world's biggest carbon emitter, has swiftly increased its wind and solar power generation, retrofitting older power plants with emissions controls and rapidly expanding its use of nuclear power.

Regardless of who is to blame for the legacy of carbon emissions in the industrial world, in Asia policymakers understand that carrying on with business as usual is just too risky.

"I think they're on the verge of realizing that's not in their best interest," said Huq.