Democratic Gov. Jay Nixon's condemnation of so-called right-to-work legislation as unnecessary and misguided drew applause from about a thousand Missouri union members who gathered Wednesday at the state Capitol. 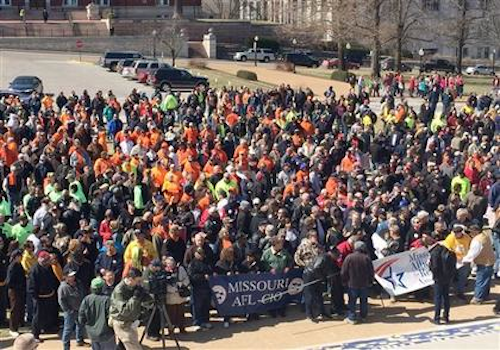 The measure to prohibit labor contracts from requiring that all employees pay union fees, regardless of whether workers are union members, is a top priority of House Republican leaders this year.

But some union members attending the annual rally sponsored by the Missouri State Building and Construction Trades Council said it would weaken a union's ability to collectively bargain and secure protections for workers.

"This is not an issue we need. It will do nothing but harm the middle class and is about lowering wages," said Glenn Lindsey, a Fulton-based Local 36 sheet metal worker for 32 years and third generation union member.

The measure's backers, including House Speaker Tim Jones, R-Eureka, argue the measure would allow Missouri to successfully compete for new jobs. Jones has said the 24 states that currently have right-to-work policies generally have the greatest economic prosperity.

Those arguments were dismissed by Nixon, who reiterated his opposition to the bill at Wednesday's rally. The governor's objections have caused Republican supporters to consider sending the issue to voters this year for approval instead of legislation he might veto to his desk. But Nixon said that approach wouldn't keep him on the sidelines.

"This is wrong and would move our state backward," he said at the rally. "If they go around me, I will stand and fight and we will win."

The House sponsor of the legislation said he understands the heightened emotions about the issue but insisted the bill would help individual workers and the state's economy.

Rep. Eric Burlison, R-Springfield, said the current system, which can cause employees at certain jobs to be required to pay union fees, isn't working.

"Workers are smart enough to know what's in their best interest," he said.

Burlison's right-to-work bill is currently on the House debate calendar and, if passed, would require voter approval in August. That proposal stipulates that any labor contract requiring employees to join a labor organization or pay union fees would have no legal effect.

Rally-goers also spoke against legislation that would require public employees to give annual written authorization for union fees to be automatically deducted from their paycheck. That bill would require similar consent for unions to spend fees on political activities.

The measure, which supporters call "paycheck protection," was passed by the Legislature last year and then vetoed by Nixon. Supporters argue it gives workers more control over how unions spend their fees. The current House version would refer the measure to the ballot instead of Nixon's desk.