International Nutrition is outsourcing production of the livestock and poultry nutritional supplements it makes following the Jan. 20 fire and collapse of the three-level southwest Omaha plant, company owner and president Steve Silver said in a written statement. 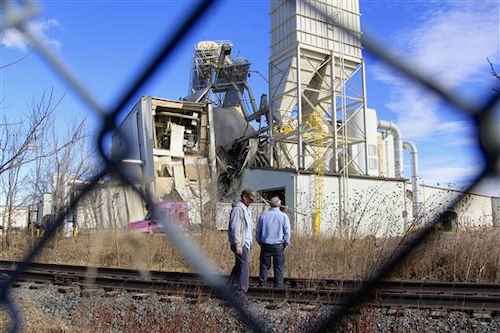 OMAHA, Neb. (AP) -- The owner of an Omaha livestock feed manufacturer that was the site of a deadly industrial plant collapse earlier this month announced Friday that his company is laying off the plant's production staff.

International Nutrition is outsourcing production of the livestock and poultry nutritional supplements it makes following the Jan. 20 fire and collapse of the three-level southwest Omaha plant, company owner and president Steve Silver said in a written statement. The industrial accident killed two workers — Keith Everett, 53, and David Ball, 47, both of Omaha — and injured 17 others.

"Since it will be months before our structure can be torn down and rebuilt, we are left with no other choice but to lay off 25 employees involved in the production process," Silver said.

The company employs 75 people, said Gene Hinkle, a spokesman for the Omaha public relations firm representing Silver and the company.

Silver said the company is providing severance and that the Nebraska Department of Labor is helping employees apply for unemployment benefits.

Hinkle said he did not know the details of the severance being offered.

The cause of the accident remains unknown. Inspectors with the U.S. Occupational Safety and Health Administration are looking at structural problems and a dust explosion as possibilities, OSHA spokesman Scott Allen said last week.

Some witnesses reported hearing an explosion before the building's top two floors collapsed into the first floor. But others have suggested that the sound and fire, which burned some workers, resulted from the collapse.

At least one injured worker has sued the company. An attorney for Tomas Balderas, who suffered broken ribs, a collapsed lung and other injuries, has said the lawsuit is primarily an effort to find out what caused the collapse.

Silver said in his statement that the collapsed building must be torn down and rebuilt.

"We do plan to rebuild the plant, and when production resumes, hope to rehire available employees," he said. "I am hopeful OSHA will quickly conclude its investigation and clear the way for us to rebuild and rehire employees."