In a fresh confrontation with Republicans, the Obama administration on Wednesday proposed stricter emissions limits on smog-forming pollution linked to asthma and respiratory illness. The move fulfilled a long-delayed campaign promise by President Barack Obama but left environmental and public... 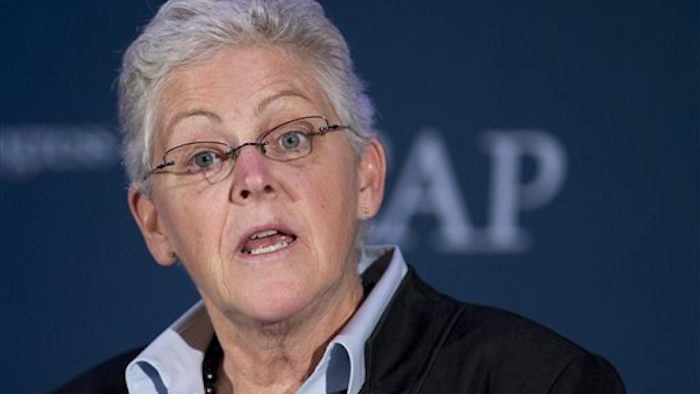 Business groups panned the Environmental Protection Agency's new ozone regulations as unnecessary and the costliest in history, warning they could jeopardize a resurgence in American manufacturing. But EPA Administrator Gina McCarthy argued that the public health benefits far outweigh the costs and that most of the U.S. can meet the tougher standards without doing anything new.

"We need to be smart — as we always have — in trying to find the best benefits in a way that will continue to grow the economy," McCarthy said. Of reducing ozone, she added: "We've done it before, and we're on track to do it again."

Ozone joins a long list of pollutants that Obama has wanted to limit using EPA regulations, seeking to cement an environmental legacy by sidestepping Congress and its opposition to new pollution laws. After pledging during his first presidential campaign to tighten ozone limits, Obama backtracked in 2011 by yanking the EPA's proposed ozone limits amid intense pressure from industry and the GOP. At the time, Obama said it was important to cut regulatory red tape while the economy was recovering from the Great Recession.

Public health groups sued, and a federal court ordered the EPA to issue a new draft smog rule by Dec. 1, with an October 2015 deadline to finalize it. Rather than settling on a firm new ozone limit now, the EPA is proposing a range of 65 parts per billion to 70. Yet in a nod to concerns on both sides, the EPA will also take public comments on an even stricter standard of 60, as well the existing standard of 75 that President George W. Bush put in place in 2008.

Cutting ozone emissions to 70 parts per billion would cost industry about $3.9 billion in 2025, the EPA estimated, while a stricter limit of 65 would push the cost up to $15 billion. A price tag that high would exceed that of any previous environmental regulation in the U.S.

McCarthy predicted the savings in health costs from cleaner air would deliver a 3-to-1 return on any investment, but industry groups like the National Association of Manufacturers dismissed those estimates and predicted far higher costs.

Although Republicans balked at the proposal, it was unclear what steps opponents will take to stop it. Congressional action to block regulations rarely succeeds. Still, GOP leaders promised tough oversight of the limits, while incoming Senate Majority Leader Mitch McConnell of Kentucky said the new Congress would "take appropriate action."

"The American people just said clearly that they want to see more bipartisanship in Washington and more jobs in their communities," McConnell said, referring to GOP gains in the midterm elections. "This latest Obama regulation would take our country in just the opposite direction."

Yet on the other end of the spectrum, environmental groups were only partially satisfied and vowed to push for the stricter limit of 60 parts per billion. That's the lower end of what scientists and an EPA report have recommended. But McCarthy conceded there's "more uncertainty with the science at that level," and it's unlikely the administration would adopt a limit that would be difficult to defend scientifically.

"Wherever they set that standard is defining what is considered 'safe,'" said Lyndsay Moseley of the American Lung Association. "It's critically important to get that right."

In the atmosphere, ozone forms a protective shield that protects the Earth from the sun's ultraviolet rays. But at the ground level, scientists say, ozone causes smog that can lead to serious respiratory illness, particularly for children, the elderly and those with lung disease. Ozone is formed when chemicals emitted by power plants, cars, refineries and factories react in sunlight.

Aiming to smooth the transition, the EPA plans to give states that have the most ozone up to 2037 to come into compliance. But McCarthy said most of the U.S. won't have to take any action, thanks to existing pollution programs and previous EPA limits on pollutants like mercury and carbon dioxide that have the side benefit of reducing ozone.

The EPA said only nine U.S. counties would fail to meet a standard of 70 parts per billion in 2025, or 68 counties if the EPA goes with the stricter 65 parts per billion. But those figures — as well as the agency's cost estimates — don't include California, whose smog problem is among the worst in the U.S. because of its unique geography. Consequently, California is on a separate timeline to cut ozone emissions.