President Barack Obama said Thursday that 19 scientists, researchers, and innovators who received the country's highest honor for their life-changing work embody the spirit of the nation and its "sense that we push against limits and that we're not afraid to ask... 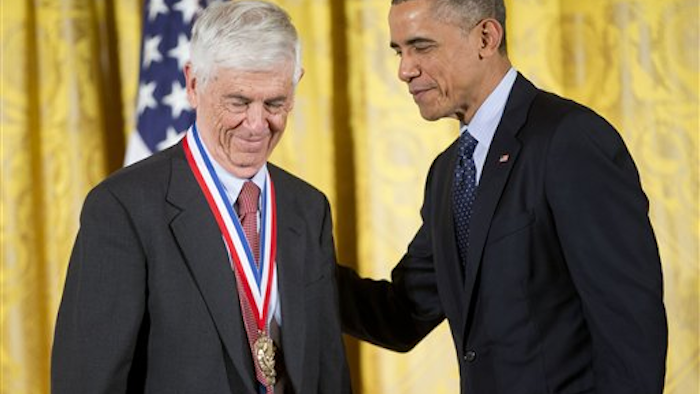 President Barack Obama said Thursday that 19 scientists, researchers, and innovators who received the country's highest honor for their life-changing work embody the spirit of the nation and its "sense that we push against limits and that we're not afraid to ask questions."

"When that spirit, that sense of possibility, is truly unleashed, then you get the remarkable men and women that you see here today," Obama said at a White House ceremony recognizing the newest recipients of the National Medal of Science and the National Medal of Technology and Innovation.

The recipients include researchers working on everything from DNA replication to personalized medicine.

Another honoree invented the tiny data storage device known as a thumb drive.

Obama used the event to plug math and science education, particularly for minority students. He announced that groups that have been trying to further his goal of getting 100,000 more math, science, engineering and technology teachers in schools are putting an additional $28 million toward the effort.

"We have to remind ourselves constantly that so much of what has set us apart economically, culturally, is our commitment to science," Obama said. "We have to continue to broaden opportunities for young scientists, especially girls and minority students, to enter into the field and we have to remind them of how exciting it is to be able to shape the world, unlock its secrets, make new stuff."

Recipients of National Medal of Science:

—Bruce Alberts, University of California, San Francisco, for experimental innovation in the field of DNA replication.

—Robert Axelrod, University of Michigan, for interdisciplinary work on the evolution of cooperation, complexity theory and international security.

—May Berenbaum, University of Illinois at Urbana-Champaign, for pioneering studies on chemical coevolution and the genetic basis of insect-plant interactions.

—Thomas Kailath, Stanford University, for contributions to the fields of information and system science.

—Jerrold Meinwald, Cornell University, for applying chemical principles and techniques to studies of plant and insect defense and communication.

—Sean C. Solomon, Columbia University, for creating approaches to understanding the internal structure and evolution of the Earth, the Moon and other terrestrial planets.

Recipients of the National Medal of Technology and Innovation:

—Edith M. Flanigen, UOP, LLC., for innovations in the field of silicate chemistry.

—Cherry A. Murray, Harvard University School of Engineering and Applied Sciences, for contributions to the advancement of telecommunications devices.

—Douglas Lowy and John Schiller, National Cancer Institute, National Institutes of Health, for work that led to the generation of vaccines that specifically target HPV and related cancers.