More than 700 workers protested Thursday in front of the South Korean Embassy in Myanmar to demand officials help them after a Korean-owned factory closed without paying their wages. 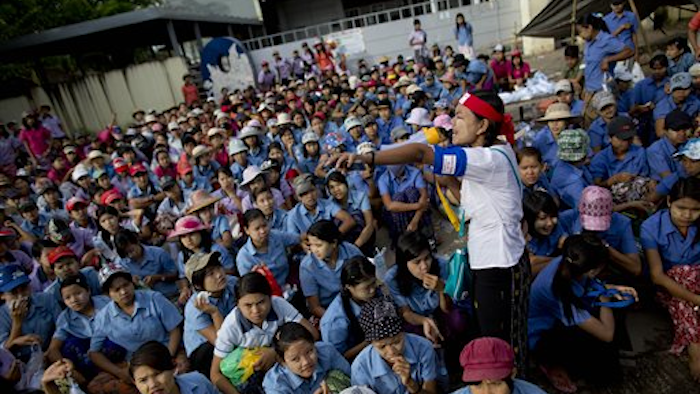 YANGON, Myanmar (AP) -- More than 700 workers protested Thursday in front of the South Korean Embassy in Myanmar to demand officials help them after a Korean-owned factory closed without paying their wages.

The workers from the Master Sports Footwear Factory in Yangon said the owner closed the plant illegally and without notice in May and has left the country. They are demanding that the Korean ambassador help them. They said they were having trouble paying their rent and wanted assistance in finding new jobs.

After an elected government took office in 2011 in Myanmar, industry has grown and foreign investment poured in in the wake of Western nations dropping most of the sanctions they had maintained against the previous repressive army regime.

Factory workers' strikes and protests have increased markedly. The new government instituted economic reforms, including the legalization of labor unions.

The workers said they have contacted not only the embassy, but also the Labor and Social Security ministries, parliament and the opposition National League for Democracy for assistance but had received no help.