Beijing is waging a war against air pollution, one barbecue at a time. Authorities in the capital have destroyed more than 500 open-air barbecues "to cut PM2.5" — the tiny particulate matter in the air that can enter deep into the lungs. 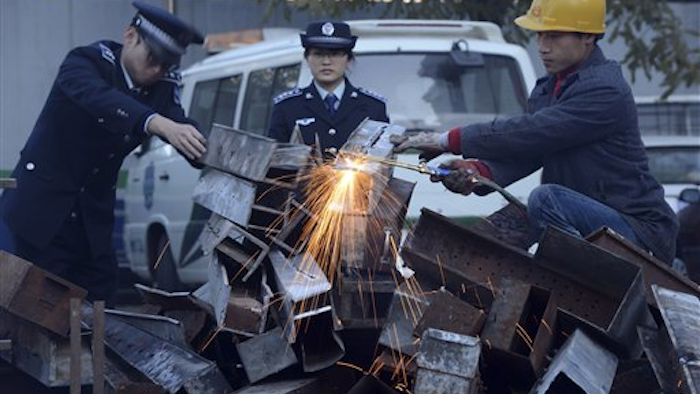 BEIJING (AP) -- Beijing is waging a war against air pollution, one barbecue at a time.

Authorities in the capital have destroyed more than 500 open-air barbecues "to cut PM2.5" — the tiny particulate matter in the air that can enter deep into the lungs.

A media officer at Beijing's Xicheng district administration bureau said the hundreds of barbecue grills were confiscated over a three-month campaign and cut up so they couldn't be used again. She refused to give her name, as is common with Chinese officials.

Environmental campaigner Ma Jun said residents had complained to environmental agencies in the past about the odor and smoke from open-air barbecues.

"This action will help local residents, but to deal with the bigger air quality problem we need to have priorities and I think one of the major priorities should still be the motor vehicle emissions," said Ma, director of the Institute of Public and Environmental Affairs. He said the focus should be on improving the fuel quality and emissions control of heavy duty diesel trucks, while also involving the surrounding regions, not just Beijing.

The capital's pollution regularly reaches hazardous levels. The city government announced last month that emergency measures such as factory shutdowns and traffic limits would kick in when air pollution levels are particularly heavy.