Requiring meat labels to have more details about a product's origins is too costly and serves no public health or safety benefit, industry groups said Tuesday in announcing a lawsuit against U.S. Department of Agriculture over new labeling rules. 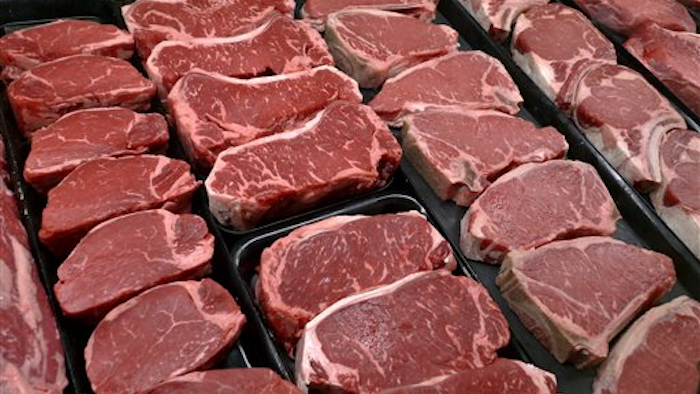 DES MOINES, Iowa (AP) -- Requiring meat labels to have more details about a product's origins is too costly and serves no public health or safety benefit, industry groups said Tuesday in announcing a lawsuit against U.S. Department of Agriculture over new labeling rules.

The rules went into effect in May and require labels for steaks, ribs and other cuts of meat to detail where animals grown for meat were born, raised and slaughtered. Previously, labels only required that countries of origin to be noted, so a package might say, "Product of U.S. and Canada." Now, the labels must specify "Born in Canada, raised and slaughtered in the United States."

In addition, the USDA is prohibiting processors from mixing meat from animals born, raised, or slaughtered in Mexico, Canada, or other countries with meat from the U.S.

The American Meat Institute, a trade group for packers, processors, and suppliers and seven other groups said segregating the meat is not part of the law Congress passed and the USDA is overstepping its authority. They also claim the rule will be costly to implement and that it offers no food safety or public health benefit.

"Segregating and tracking animals according to the countries where production steps occurred and detailing that information on a label may be a bureaucrat's paperwork fantasy, but the labels that result will serve only to confuse consumers, raise the prices they pay, and put some producers and meat and poultry companies out of business in the process," Mark Dopp, an AMI executive, said in a statement.

The USDA says the country of original labeling, known as COOL, will help consumers make informed decisions about the food they buy.

"USDA remains confident that these changes will improve the overall operation of the program and also bring the mandatory COOL requirements into compliance with U.S. international trade obligations," it said.

Other advocates of the new rule say segregating meat will help if a food safety issue develops.

"We've found that there's strong consumer support for country-of-origin labels. When you buy meat to feed your family, you ought to be able to know where it comes from," said Ami Gadhia, senior policy counsel for Consumers Union, a New York-based consumer advocacy group. "If there's a food safety problem with a certain product, the labels can help consumers avoid that product."

The rules also have had support from other farmers' organizations, along with environmental groups.

The meat industry groups that sued said in court documents that about 4 percent to 7 percent of beef and pork consumed in the U.S. comes from animals from other countries. In some parts of the U.S., including Texas, New Mexico, Arizona and California, as much as half of the livestock used for meat could be imported.

Once in the supply chain, the meat becomes interchangeable with meat from U.S. animals, the groups said.

"In short, beef is beef, whether the cattle were born in Montana, Manitoba, or Mazatlán," the lawsuit filed in federal court in Washington, D.C., said. "The same goes for hogs, chickens, and other livestock."

Meat suppliers will be forced to segregate the animals along the entire supply chain "from the moment livestock are put in a pen on U.S. soil, throughout the production, storage, and distribution process, until the meat is placed on store shelves for sale."

The USDA estimates the labeling change will cost somewhere between $53.1 million and $192.1 million to put in place. The National Grocers Association said it expected it to cost at least $100 million as companies buy new signs, labels and labeling machines.