Officials say the push for more practical training operations comes at a critical time. The Pentagon's budget faced cuts as high as 13 percent in some of its accounts after Congress couldn't reach a deal to avert automatic, across-the-board spending cuts. 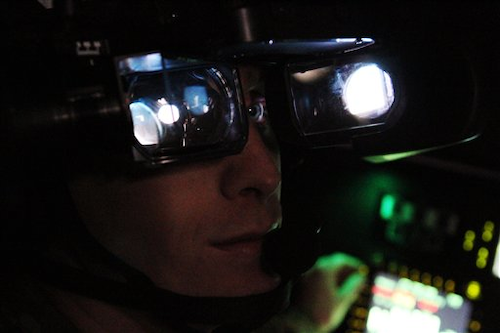 FORT BLISS, Texas (AP) -- More than a dozen troops carefully maneuver through overgrown shrubs, firing laser-tag rifles at the enemy as they advance on a compound in the New Mexico desert. Fifty miles away in West Texas, other soldiers in helicopter and tank simulators provide air and ground support for the virtual training exercise.

An Army supervisor watches it all unfold on a computer screen at a Fort Bliss command center. The real mission, however, comes next: a thorough, high-tech review of the soldiers' tactics.

The exercise is part of a new Army virtual program that records every aspect of training missions so soldiers can use video game-like replay to study how effectively the ground and air forces interacted. The system — a major upgrade over previous platforms that didn't fully integrate tank and helicopter communications — will be installed at posts across the U.S. and abroad.

The Integrated Training Environment is designed to cut costs, sharpen soldiers' ability to interact with various units and allow the military to more quickly train the growing ranks of troops returning from deployment. However, it's not intended to do away with live training altogether but rather, to better prepare soldiers for real-life training exercises.

"(Training gives soldiers) muscle memory through repetition ... so when we are in Iran, Syria, Africa, it's going to kick in," said Sgt. 1st Class Donald Jones, who operated a tank simulator during the exercise.

Officials say the push for more practical training operations comes at a critical time. The Pentagon's budget faced cuts as high as 13 percent in some of its accounts after Congress couldn't reach a deal to avert automatic, across-the-board spending cuts.

Mike Casey, spokesman for the Army's Combined Arms Center-Training program, said it wasn't immediately clear what impact the across-the-board cuts that took effect Friday would have on the program.

Inside the command center, dozens of computers run the simulations that can replay the entire exercise on a giant screen. The live, virtual and computer-generated forces come together seamlessly, much like the replays from video games that allow the user to rotate the images to view the mission from any angle.

By the time the drill is over, the infantry team had fired hundreds of rounds, cleared several buildings and called for artillery support, all of it recorded by ITE. Commanders can see in the replay how ground troops battled through computer-generated artillery fire while tanks battled each other a few miles away.

Some soldiers complimented the new equipment required for the system, including the lighter laser-sensors on their helmets.

"The older models were like having a TV screen in the back of my head," said Pfc. Victor Colon while his unit was debriefed by their sergeant after the drill.

Jones and his three-person crew inspected the tank simulators the day before the recent training mission, shutting the doors to the beige van-sized boxes and finding a realistic interior. Monitors show digital images of other tanks, helicopters and computer-generated enemies participating in the exercise.

A couple of miles away, helicopter pilots tested their simulators inside two trailers parked side by side. The cockpits replicate every aspect of normal helicopter controls and, for the first time, give pilots a chance to interact with tanks that aren't pre-programmed.

Each simulator is tuned into the infantry unit of 15 soldiers trying to take over the compound in Oro Grande, N.M. These soldiers wear laser-tag vests and laser-equipped rifles to keep track of who killed who and GPS-like devices that show their location to helicopter pilots and the officers directing the exercise.

The system, which currently is employed at Fort Hood and Fort Bliss, Texas, will be expanded by 2017 to 18 locations, including one in South Korea sometime this year. Eventually, the Army expects to be able to link units halfway across the world.

Some Army posts have attempted to create interactive training systems but they were not fully developed and one-time-only exercises, said Lt. Col. Shane Cipolla, who is in charge of deploying the virtual platform. Many commanders stressed the need to develop a better system for ground and air forces to train together, he said.

"This is a good tool for it," said Cipolla, standing a short distance from the troops storming the compound.

Cipolla acknowledged the spending cuts were considered as the Army pushed for an upgraded training platform that could handle more soldiers at a fraction of the cost needed to train with real helicopters and tanks. The program costs about $8 million per year in research and development, but it presents significant savings each time the Army opts for simulated missions.

While the Army pays about $6,400 a day to run a center with 28 tank simulators that can be linked to the new system, the cost of operating 28 Abrams tanks would be $196,000 a day. In 2011 the Army paid about $19 million for 14,000 hours of simulated helicopter and weapons training — a price the Army estimates would have been $281 million if done with live equipment.

Jones says he understands the cost savings and acknowledges some virtual interaction with a helicopter could have helped during his deployment to Afghanistan. Still, he prefers the real thing.

"There are two things I love," he said with a chuckle. "One is my wife, the other is a tank."