Not everyone here works at the Remington factory, but everyone knows someone who does. The big brick complex looms above the rooftops of the modest wood-frame homes. And Ilion can look more like a factory with a village than a village with a factory. "Remington is Ilion. Ilion is Remington," said Mayor John Stephens. 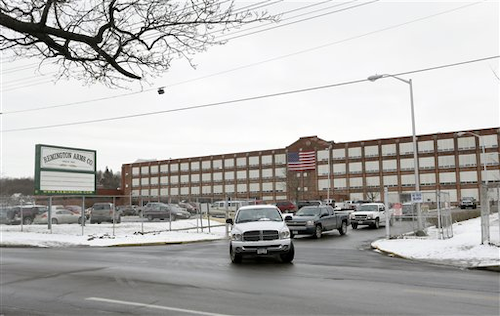 ILION, N.Y. (AP) -- Not everyone here works at the Remington factory, but everyone knows someone who does. The big brick complex looms above the rooftops of the modest wood-frame homes. And Ilion can look more like a factory with a village than a village with a factory.

Little wonder that residents in this blue-collar stretch of the Mohawk Valley are defending Remington after New York lawmakers banned the sale of semi-automatic assault-style rifles like the Bushmaster weapon made here. The move came after the weapon was linked to gunmen in the Connecticut school shootings and in the Christmas Eve slayings of two firefighters in western New York.

"It's the person that pulls the trigger. I don't care what kind of gun it is," Tom Bradle, a Remington employee, said as he walked back to the factory from lunch break on a chilly, gray day last week.

Chad Delmedico, who works on Remington's Model 700 bolt-action rifle, said it more simply: "We have a bum rap."

Remington has been intertwined with Ilion since shortly after Eliphalet Remington crafted a flintlock rifle on his father's forge in 1816. Even the elementary school shares the company's name. Company officials did not respond to calls seeking comment, but locals say the factory employs about 1,200 and also produces Bushmaster, Marlin and H&R products.

Parts of the Remington Arms Co. factory, with its imposing four-story front of brick and old-style, multi-paned windows, date back to the days when upstate New York was a manufacturing powerhouse. But factory jobs have become rarer in the string of modest towns along the Mohawk River, and Ilion, with about 8,000 residents, depends heavily on Remington Arms Co.

Stephens, a burly man with a walrus moustache, was disgusted by the news last month of 20 first-graders and six adults killed by a gunman at Sandy Hook Elementary School in Newtown, Conn. But he is critical of the New York state law approved this week that bans assault-style rifles, calls for background checks on ammunition purchases and outlaws large-capacity magazines, among other measures. He dismisses the idea that there's an emotional link between Newtown and Ilion.

"Are people disappointed and distraught?" Stephens asked. "Do they feel bad and are they sad? Absolutely! Absolutely! I would never wish that on anyone, never. But as far as an emotional attachment between us and them, I don't see it."

At the State Bowling Center next to the factory, Rod Brown said the weapon that gunman Adam Lanza used in Connecticut could have easily been a Smith & Wesson or a Browning.

Kelley Holmes-Morton in her salon, Heads-R-Turning, said she is an NRA member who believes gun makers are not to blame. And Betty Watkins said as she pumped gas that the Second Amendment is being "pushed around and misused."

"I look at it differently," said Jamie Rudwall, a union official who has worked at the plant since 1995. He's also the father of a second-grader.

"I think of Anheuser-Busch, I think of Ford tires, I think of Tylenol," he said, citing other major brands that have been blamed for tragedies as varied as drunken driving deaths and poisonings. "It doesn't matter what age it is. Terrible things happen."

"I cried my heart out" after Sandy Hook, she said. "I'm torn between both sides. But you can get another job. You can't get another kid."

Bushmaster is owned by Freedom Group Inc., the largest firearms maker in the U.S., which has its headquarters on Remington Drive outside the neighboring small towns of Madison and Mayodan, N.C.

No guns or ammunition are manufactured there. Most people around know the 43,000-square-foot building near the high school and the Walmart as the home of Remington Arms, which moved to the site in the mid-1990s, and not the weapons conglomerate Freedom Group has become, said Mayodan Town Manager Michael Brandt.

"They're not big contributors to the community like a typical large company would be in an area," Brandt said. "This is where they're located but we don't really see much of them."

Word that Freedom Group is for sale and changes are looming has generated little local concern in an area where surviving textile producers and a Miller-Coors brewery are bigger employers, said Sharon Chirichella, who runs a temporary staffing agency and is an officer with the local chamber of commerce.

That contrasts with Ilion, where the concern among people is the future of Remington. The company had said last March it could leave New York if the state went ahead with a move to add unique identifying information on spent bullet casings. That proposal is off the table but people here now wonder where things stand in the wake of the new state law, which does not affect Remington's ability to manufacture assault-style weapons here.

"If I'm an executive at Remington, what's my attitude going to be toward the state that bans one of the premier products that I produce?" asked local Assemblyman Marc Butler.

Obama's gun-control proposal added more uncertainty. Rudwall, president of the United Mine Workers of America Local 717, said he expected the gun business to increase in the short term amid new regulatory proposals, but he worries about jobs in Ilion long term.