Teens are at least four times more likely to die on a farm than in any other workplace. With regulation off the table, scientists at the University of Iowa and the Marshfield Clinic in Wisconsin are trying to attack the problem from a different angle. They're looking at how children of different ages process information and make decisions while driving tractors in a first-of-its-kind study of cognitive development skills. 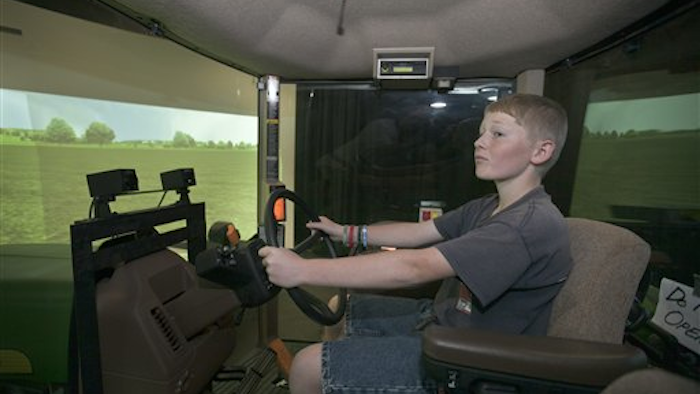 In this Aug. 27, 2012 photo, Mark Gregoricka, 12, operates a tractor simulator in Coralville, Iowa. Scientists at the National Advanced Driving Simulator at the University of Iowa in Coralville this month started what they hope will be a pioneering years long research project that aims to learn how cognitive development affects youth driving performance in tractors. (AP Photo/Nati Harnik)

CORALVILLE, Iowa (AP) — Researchers who hope to prevent children from dying in tractor accidents are turning to a state-of-the-art driving simulator to help determine when kids can safely operate farm equipment.

Teens are at least four times more likely to die on a farm than in any other workplace. The U.S. Department of Labor tried to address the problem earlier this year with rules that would have limited their ability to operate farm equipment. But the Obama administration dropped the proposal after farm families and groups denounced it as overreaching and an attack on their way of life.

With regulation off the table, scientists at the University of Iowa and the Marshfield Clinic in Wisconsin are trying to attack the problem from a different angle. They're looking at how children of different ages process information and make decisions while driving tractors in a first-of-its-kind study of cognitive development skills.

The research results eventually could be used to revise voluntary guidelines for parents and employers about when teenagers are ready to perform a variety of farm tasks, from mowing along a fence line to using a manure spreader, researchers said.

"Our goal is to try to develop knowledge that makes it easier to prevent these accidents," said Tim Brown, a University of Iowa researcher who helps run the National Advanced Driving Simulator in Coralville.

Operating farm equipment, including tractors, is the leading cause of death and a top cause of injury among children who work in agriculture, one of the nation's most dangerous occupations. Government data dating back to the 1990s shows that two dozen or more children die each year in tractor accidents, but researchers say the lack of a central database makes it harder to be more precise and up-to-date.

Barbara Marlenga, a researcher with Marshfield Clinic's National Farm Medicine Center, said farmers want to hang on to longstanding traditions, such as allowing children to hop on tractors at a very young age. But she said the number of deaths and injuries shows children are being exposed to situations that aren't safe, and the National Advanced Driving Simulator is the perfect place to study them without risk.

Eighty-eight farm children with tractor experience will hop in the cab of a commonly used John Deere tractor to take a virtual drive within the next month. A movie screen wraps around the tractor, projecting life-like images of their surroundings.

The children, ages 10 to 17, will mow fields, navigate hills and maneuver around buildings, people and vehicles. They'll drive along gravel roads in traffic, merge, stop at intersections and pass cars.

All the while, software will record their every move, including speeds, use of brakes, acceleration and eye movements. A control group of 10 adult farmers also will participate.

The pilot study, funded by the National Institute for Occupational and Safety Health, aims to determine whether the simulator can pinpoint small differences in the children's performance. If successful, it could lead to a longer and much larger study, Marlenga said.

Joe Gregoricka, 16, said the John Deere used in the study had a different feel than the older tractors he drives on his family's goat farm near Springville and the sweet corn farm where he works. He said the roads were "very realistic," although he joked the drivers in the simulator wouldn't pass him on a rural road when he waved.

Gregoricka said he's aware of the dangers of farm equipment, including a wagon that he backs up to a conveyor belt to sort corn. It could trap somebody if operated incorrectly. But he said he feels like he's "pretty good" since he's been driving farm equipment for years.

His mother, Karen Gregoricka, said that she "can't stand to watch" Joe and his brothers, 12-year-old Mark and 14-year-old David, operate farm machinery, but they do so with their father's strict supervision. She said they started driving small skid loaders when they were about 10 and began using tractors in limited situations at 12.

"I've always worried about kids and tractors. It's a scary thing," she said. "It's hard to know when they are ready."

Parents looking for guidance now find a confusing array of recommendations that Marlenga said are based on expert consensus, but not science.

The American Academy of Pediatrics recommends children be 16 before operating farm equipment, but federal rules allow workers as young as 14 to drive tractors if they pass a certification course.

"The information from a scientific study like this can help to either support some of these guidelines or say, 'Maybe these should change a little bit,'" Marlenga said. "That's the impetus for our study."