Take it From Freedom Industries: How NOT to Handle a Major Chemical Accident

It’d be a comedy of errors if it was funny. But for the former executives of Freedom Industries, there hasn’t been much to laugh about since the Jan. 9 2014 spill into the Elk River that catapulted them into the spotlight. Gary Southern, the infamous former president of the chemical company, is back in the news this week... 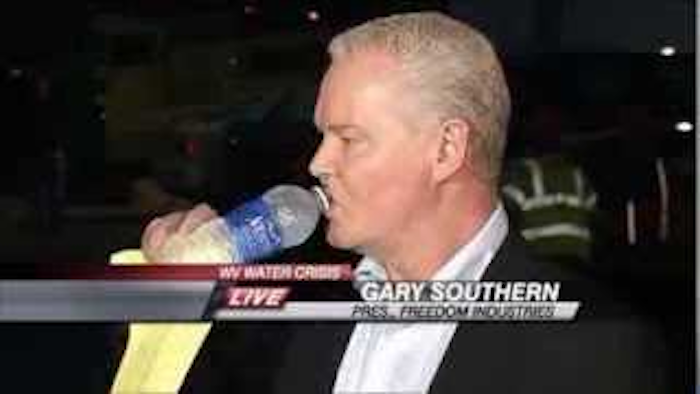 It’d be a comedy of errors if it was funny. But for the former executives of Freedom Industries, there hasn’t been much to laugh about since the Jan. 9 2014 spill into the Elk River that catapulted them into the public eye.

Gary Southern, the infamous former president of the chemical company, is back in the news this week along with former owners, Dennis Farrell, Charles Herzing and William Tis. Defense attorneys for the four are asking a judge to delay the beginning of their trials so they can further review the massive number of files provided by prosecutors. Currently, the trials are set for March 10.

The executives are facing charges based both on the reasons for the major chemical spill and for fraud associated with the company’s subsequent bankruptcy. And if there were laws against the disastrous handling of an already tough PR situation, they’d likely be facing jail time for that, too.

Realistically, they would have landed in the hot seat either way. The spill unleashed thousands of gallons of a coal-processing chemical, 4-methylcyclohexane methanol (MCMH) into the Elk River, ultimately leaving about 300,000 without safe water for days. Many residents were sent to the hospital with symptoms such as nausea and rashes, though none were in serious condition.

But still — from the get-go, Freedom Industries managed to make it all worse by completely bungling the unfolding fiasco on many levels. It was so bad, the crisis management team Freedom hired wouldn’t even stick with the company — and abruptly dropped them as a client two days after being hired.

So, do you need to know how to not dig yourself into a deeper and darker hole in the unfortunate event of a major environmental and PR catastrophe? Take a few cues from Freedom Industries’ variety of missteps along the way.

Don’t Get Snarky And Short With Reporters
“Look guys, it’s been an extremely long day, and I’m having a lot of trouble talking…I would appreciate it if we could wrap this up,” former Freedom President, Gary Southern, said shortly after starting a press conference the day after the spill.

The comment might not have garnered too much attention if it wasn’t for one quick-on-her-feet reporter who fired back: “It’s been a long day for a lot of people who don’t have water,” before pressing Southern for answers to more questions.

Within days, clips from the tense press conference were passed all over the web, turning what should have been a story about Freedom Industries making public apologies and leading cleanup efforts into one about a flippant CEO getting pressed against the wall by a sprightly journalist. The incident even prompted a parody on YouTube.

Don’t Drink Aquafina on TV When Thousands of People Are Struggling to Find Safe Drinking Water
While we’re on the subject of that televised press conference, many were quick to point out the tackiness of Southern gulping Aquafina while thousands of residents were without safe drinking water of their own.

In fact, residents weren’t even able to touch the water that was flowing into their businesses and homes, and the “do-not-use” advisory wasn’t lifted for five days.

And the bottled water that was distributed to residents affected by the spill came from FEMA and the West Virginia National Guard — not from anyone at Freedom.

Since then, the image of Southern drinking the bottled water has for many become synonymous with mishandling of the spill and certainly done damage to public perceptions of the company.

Don’t Skimp on Updating The Public
After the accident, Freedom didn’t update their website to let residents know how cleanup efforts were going (their site still makes no mention of the incident). In fact, they were heavily criticized for not reporting the spill for hours after they knew about it.

Then, aside from the brief and slightly disastrous press conference mentioned above, they made little effort to engage the public at all.

Days after the event, one PR industry news site compared Freedom’s handling of the disaster to how Southwest Airlines had communicated their recent “oopsie” when one of their planes landed at a wrong (but near to its destination) airport.

With the Southwest incident, communication was prompt and the public was updated frequently. Meanwhile, the Freedom guys were dodgy and unhelpful. Naturally, the PR news source concluded that the Freedom incident was not a “good model” for how to deal with a crisis.

Don’t Lie About Cleanup Efforts
According to several reports, Southern told inspectors that the clean up began right after the leak was discovered. But once inspectors arrived on the scene, they found MCHM leaking through a concrete block Freedom was using to try to contain the spill and no other containment measures underway.

Don’t Make Shady Financial Maneuvers After The Fact
When the spotlight is already shining brightly on you (and the public is definitely not on your side), you can expect that everything you do is going to be scrutinized — including filing your company for bankruptcy.

But the federal government has alleged that Southern nonetheless tried to hide personal assets from the company’s creditors during the bankruptcy case to the tune of $6.8 million. The alleged actions bought Southern three counts of bankruptcy fraud.

But Do Try to Prevent Similar Accidents
This probably goes without saying, but the whole disaster could have been avoided if Freedom would have kept its tanks in better shape.

In a Chemical Safety Board report filed last summer, the agency found that holes in the tank’s floor and roof likely played a role in the January spill and that there were other tanks at the facility in need of similar repairs.

Bottom Line:
In addition to fraud, the former Freedom executives face charges of violating the Clean Air Act. If convicted Southern could face up to 68 years in prison, while Farrell, Herzing and Tis face up to three.

One thing is for sure: Their poor handling of the accident will keep them in the news for some time to come.

What do you think about how Freedom has handled the Elk River spill? Let us know by leaving a comment below.