Food Manufacturing recently had the opportunity to correspond with Shagha Tousi, a partner at Boston law firm Nutter McClennen & Fish LLP who specializes in Product Liability litigation, on the topic of GMO legislation. 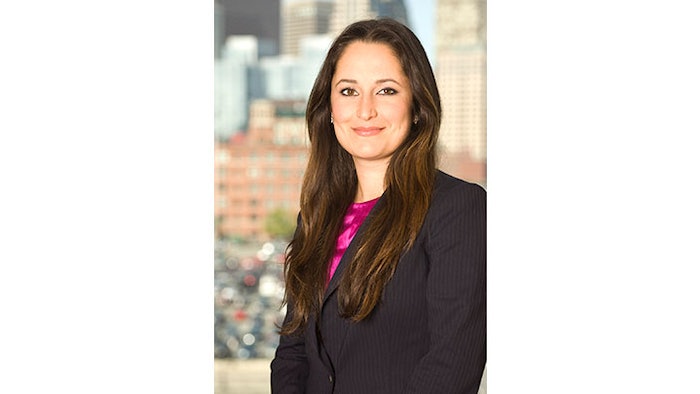 The topic of genetically modified organisms (GMOs) has generated plenty of attention across the food manufacturing landscape.

Food Manufacturing recently had the opportunity to correspond with Shagha Tousi, a partner at Boston law firm Nutter McClennen & Fish LLP who specializes in Product Liability litigation, on the topic of GMO legislation.

What can food manufacturers expect in 2016 given different versions of GMO legislation at the state level around the country?

While impossible to predict with any certainty what will happen in 2016, manufacturers can certainly expect that it will be an active year.  Massachusetts, Connecticut, Maine, New Hampshire, Rhode Island, and Vermont are just a few of the states that have either proposed or enacted legislation on the topic of GMO labeling requirements.

Given the increased attention being paid by the media and consumers to food labeling and the use of genetic engineering in foods, the list of states that will consider GMO labeling requirements is likely to grow. Manufacturers need not panic, however, because many proposed statutes contain multi-state trigger provisions that delay the effective dates of statutes until other states enact similar rules.

At the start of 2016, Maine, Connecticut and Vermont were the only states that have passed mandatory labeling legislation, with the legislation in two of those states (Connecticut and Maine) containing multi-state trigger provisions.

Bottom line, manufacturers should keep their eye on legislative action at the state level in 2016, since each new state that enacts mandatory labeling legislation could have implications on other states’ legislation taking effect.

What about the federal government?

Food manufacturers should also keep their eye on federal action in 2016. Last July, the U.S. House of Representatives passed the Safe and Accurate Food Labeling Act, which is currently pending before the Senate Committee on Agriculture, Nutrition and Forestry. If enacted, this statute will regulate the sale of and disclosures required with respect to genetically engineered plants, including those used for food, as well as the labeling of food as “natural.”

This type of federal legislation, which would expressly preempt various state statutes being proposed and enacted, is expected to have wide-reaching implications, and potentially significant costs, for manufacturers who would need to come into compliance.

Why is the Vermont statute so important?

Vermont’s mandatory genetic engineering labeling legislation, known as Act 120, is set to take effect on July 1, 2016, requiring that all food sold in Vermont that is entirely or partially produced with genetic engineering be labeled as such.  If that date holds, 2016 will be the year that the country’s first GMO labeling legislation takes effect.

The Vermont statute is currently the subject of litigation filed by a number of food trade associations challenging the legislation on several bases including federal preemption pursuant to several federal statutes regulating the labeling of food and beverages, including the Federal Food, Drug, and Cosmetic Act (“FDCA”). Pending the outcome of this litigation, this could be the year that manufacturers, at least those selling food products in Vermont, could be required to begin labeling products that are entirely or partially produced with genetic engineering.

How does the “natural” vs. GMO food labeling issue effect the interests of state and federal governments to regulate food safety?

The topic of food labeling, including “natural” or GMO labeling, certainly impacts the conflicting interests of the state and the federal government to regulate food safety.

Moreover, various federal statutes including the Federal Food, Drug, & Cosmetic Act already provide for a complex regulatory scheme that governs the production and sale of food products in the U.S.

State legislation with labeling requirements that conflict with the labeling requirements set forth by the FDA and federal regulations would impede on the FDA’s ability to create a uniform regulatory scheme. If allowed to stand in conflict, the differences between federal and state statutes will make it nearly impossible for manufacturers to comply with federal regulation and individual state statutes without incurring enormous costs that for many, will be prohibitive.

The viability of federal statutes under the Constitution’s Commerce Clause and the Supremacy Clause, which provides federal preemption over state laws, is at the heart of the litigation currently pending in federal court in Vermont over that state’s legislation.

The Vermont law specifically states that a food product must be labeled as a GMO and not as natural if it is “partially produced with genetic engineering.” How have past court decisions viewed the term “partially produced” in terms of a percentage threshold or a similar benchmark?

It is hard to say what courts will do with this because the term “partially produced” has never been litigated in the context of food production or labeling. The statute itself, however, specifically exempts any food from labeling requirements if the food “includes one or more” genetically engineered materials that “in the aggregate do not account for more than .9 percent of the total weight of the processed food.”

How does the FDA’s November 2015 Guidance on labeling of plant-based foods manufactured through genetic engineering affect statutes such as those in Vermont?

The fact is that the FDA leads the charge with respect to regulation of food safety in the U.S. So the FDA has issued a guidance that assists those seeking to challenge state GMO labeling statutes on the grounds that such state statutes are preempted by the federal regulatory scheme. Litigants can use this guidance to argue that the FDA has spoken on the topic and their position must be given preemptive effect.

This type of challenge has not been successful in the past, however. In a 2014 case involving the the cereal and snack bar manufacturer Kashi Co., the federal court in Florida denied an argument that public policy statements by the FDA should be given preemptive effect. The FDA statements relied upon by Kashi did not rise to the level of a formal guidance, but absent more definitive action from the FDA or further regulation it’s likely that other courts will be similarly reluctant to determine that FDA guidance should preempt state statutes.

Assuming the courts uphold the Vermont Law, what steps should food manufacturers consider taking in order to avoid regulatory enforcement in Vermont or costly litigation?

To start, food manufacturers should consult with their regulatory counsel to determine what steps they should be taking to begin coming into compliance with this statute.

Generally speaking, each manufacturer will need to evaluate its ingredient sourcing and its production methods to determine whether their foods are currently manufactured using genetically engineered ingredients or processes.

Assuming the answer is yes for the vast majority of food products that are currently marketed, manufacturers would be wise to revisit their packaging labels and consider whether the statutorily provided language “produced with genetic engineering,” or one of the variations of this provided in the Vermont statute, should be added to labels.

Of course, manufacturers should be aware that the statute provides certain exemptions and should consult their regulatory counsel to determine whether their products meet any of the statute’s exemptions.

If the Vermont GMO label law goes into effect, can the food industry expect that Congress or the FDA will finally take steps to clarify what’s allowed to be labeled “all natural” under federal regulations?

Because the U.S. House of Representatives passed the Safe and Accurate Food Labeling Act, which is currently pending before the Senate Committee on Agriculture, Nutrition and Forestry, the mechanism is in place for manufacturers to understand the disclosures that are necessary for genetically engineered foods, but also the labeling of foods as “natural.” If conflicting state statutes are enacted, Congress will be further incentivized to finalize legislation that governs these issues uniformly.