Federal law generally protects gun manufacturers and dealers when crimes are committed with their products. 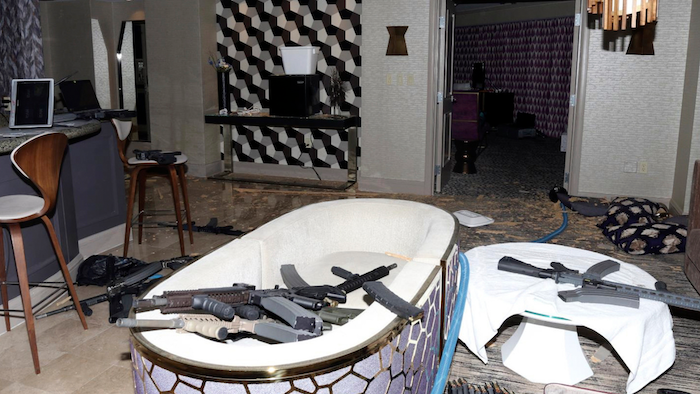 The interior of Stephen Paddock's 32nd floor room of the Mandalay Bay hotel in Las Vegas after a mass shooting.
Associated Press

LAS VEGAS (AP) — A U.S. judge is asking Nevada’s highest court to decide whether state law allows gun manufacturers and sellers to be held liable for deaths as he considers a lawsuit from the parents of a victim of the deadliest mass shooting in the nation's modern history.

Federal law generally protects gun manufacturers and dealers when crimes are committed with their products. A negligence and wrongful death lawsuit filed last year in Las Vegas accuses eight firearms makers and several shops in Nevada and Utah of letting weapons be easily modified to fire like automatic weapons.

A shooter in 2017 outfitted weapons with “bump stock" attachments that let him fire in rapid succession from a Las Vegas high-rise hotel into an open-air concert crowd, killing 58 people and injuring hundreds of others.

U.S. District Judge Andrew Gordon asked last month for the ruling from the Nevada Supreme Court, saying there are “important public policy ramifications.” A hearing has not yet been set.

“I am particularly concerned," Gordon wrote, that attorneys for the gun makers argued they would be immune from liability under state law even if they “manufactured and sold Tommy guns or M-16 rifles to civilians.”

Attorneys for Colt’s Manufacturing Co. and 11 other defendants did not immediately respond to telephone and email messages.

James and Ann-Marie Parsons of Seattle, whose 31-year-old daughter Carolyn Lee “Carrie” Parsons died in the shooting, are seeking unspecified monetary damages. Their lawyer, Richard Friedman, said Tuesday that “federal law provides a lot of immunity, but not total immunity.”

“We’re saying you were selling guns that meet the definition of machine guns in violation of federal law, so you don’t get protection," he said.

Friedman said a federal judge deferring to the state high court is uncommon but not unprecedented and acknowledged that the Parsons' lawsuit could hinge on the decision by the Nevada justices.

The Las Vegas shooter killed himself before police blasted through the door of his 32nd floor suite at the Mandalay Bay resort. Police and the FBI say that while it appeared he sought notoriety, they could not identify any “single or clear motivating factor" for the meticulously planned attack.

The owner of the hotel, MGM Resorts International, reached a sweeping out-of-court settlement last October, agreeing to funnel up to $800 million to the families of the victims.

The agreement resolved lawsuits in at least 10 states, but MGM Resorts acknowledged no liability or guilt for the massacre.