A federal judge ruled the state was wrong to eliminate the option of using independent drivers. 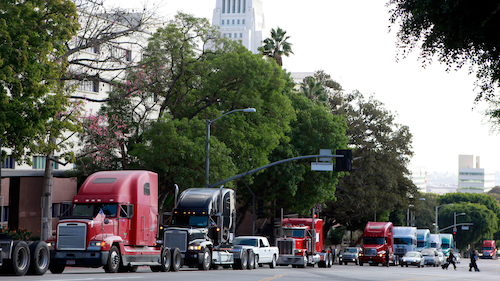 A caravan of trucks from the ports of Los Angeles and Long Beach drive around Los Angeles City Hall.
AP Photo/Damian Dovarganes, File

SACRAMENTO, Calif. (AP) — A federal judge on Thursday indefinitely blocked a new California labor law from applying to more than 70,000 independent truckers, deciding that it is preempted by federal rules on interstate commerce. The state law that took effect January 1 makes it harder for companies to classify workers as independent contractors instead of employees who are entitled to minimum wage and benefits such as workers compensation.

But when it comes to independent truckers, "California runs off the road and into the preemption ditch" of federal law, wrote U.S. District Judge Roger Benitez of San Diego. He granted the California Trucking Association a preliminary injunction, indefinitely extending his earlier temporary restraining order until the association's challenge is ultimately resolved in months or years.

"There is little question that the State of California has encroached on Congress' territory by eliminating motor carriers' choice to use independent contractor drivers, a choice at the very heart of interstate trucking," Benitez wrote. He added that the state law would produce "the patchwork of state regulations Congress sought to prevent."

The broad focus of the state law has been on ride-share companies such as Uber and Lyft and food delivery companies like DoorDash and Postmates, which are also challenging the law in court and at the ballot box. But other groups contend they are victims of unintended consequences, including freelance writers and photographers who filed their own lawsuit.

An organization representing translators and interpreters on Thursday said it is lobbying state lawmakers to also exempt its members. It says many "are truly independent contractors" caught up in the new restrictions intended to help employees who had been wrongly classified by employers. The state attorney general's office said it is reviewing the judge's decision in the trucking case, adding that "our office has and will continue to defend laws that are designed to protect workers and ensure fair labor and business practices."

The trucking association's chief executive, Shawn Yadon, called the preliminary injunction "a significant win" for truckers who may have invested hundreds of thousands of dollars in trucks that must meet the state's strict environmental standards. The ruling is too narrowly focused to affect other pending cases, said Michele Miller, an attorney with the Cozen O'Connor labor and employment law firm who is not involved in the lawsuits.

"There's a specific preemption provision, and that's unlike the other two, the journalists and Uber and Postmates, where they're relying on constitutional prohibitions," she said. Those challenges argue that the labor law variously infringes on free speech, equal protection, due process and interference with contracts.

Aside from the lawsuits, she said there will be a continued tug-of-war in the Legislature this year between groups that want to expand and narrow the law. "We have not heard the end of AB5 in any way shape or form," Miller said. "I think we'll continue to see attempts to deal with some of the fallout of the legislation."