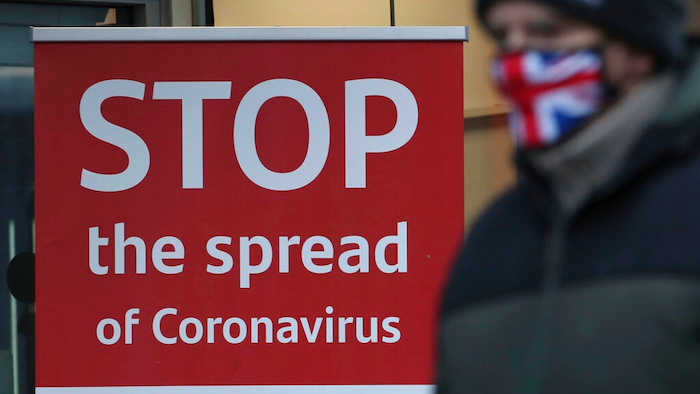 A man wearing a British union flag face mask walks past a coronavirus advice sign outside a bank in Glasgow the morning after stricter lockdown measures came into force for Scotland, Tuesday Jan. 5, 2021. Further measures were put in place Tuesday as part of lockdown restrictions in a bid to halt the spread of the coronavirus.
Andrew Milligan/PA via AP

LONDON (AP) — Despite growing vaccine access, January is looking grim around the globe as the coronavirus resurges and reshapes itself from Britain to Japan to California, filling hospitals and threatening livelihoods anew as governments lock down businesses and race to find solutions.

England headed back into lockdown. Mexico City’s hospitals hold more virus patients than ever. Germany reported one of its highest daily death tolls to date Tuesday. South Africa and Brazil are struggling to find space for the dead. Even pandemic success story Thailand is fighting an unexpected wave of infections.

And as doctors face or brace for rising numbers of COVID-19 patients after end-of-year holiday gatherings, more and more countries are reporting cases of a new, more contagious variant that has already swept across Britain.

January is going to be “a tough one,” said Dr. Margaret Harris, a spokeswoman for the World Health Organization. “This idea that seems to be ‘Ah, we’re all sick of it. We want to look at something else. Oh, this doesn’t apply to me' ... that’s got to go away. It really is all hands on deck.”

While Britain rolled out a second vaccine this week and some U.S. states are starting to give the second round of shots, access to inoculations globally is sharply unequal. The supply isn’t remotely close to meeting the epic demand needed to vanquish a foe that has already killed over 1.85 million people.

England is facing a third national lockdown that will last at least six weeks, as authorities struggle to stem a surge in COVID-19 infections and relieve hospitals, where some patients are left waiting in ambulances in a parking lot for access to overcrowded wards.

Prime Minister Boris Johnson announced the tough new stay-at-home order for England, effective at midnight Tuesday. It will shut schools, restaurants and all nonessential stores and won’t be reviewed until at least mid-February. Scottish leader Nicola Sturgeon imposed a lockdown that began Tuesday.

The two leaders said the restrictions are needed to protect the National Health Service amid the emergence of the new variant that has sent daily infections, hospitalizations and deaths soaring.

The NHS "is going through probably the toughest time in living memory,″ said Siva Anandaciva, chief analyst of the King’s Fund think tank.

Elsewhere in Europe, Italy and Germany extended their Christmastime lockdowns, Spain is restricting travel, and Denmark lowered the number of people who can gather in public from 10 to five. France is likely to announce tougher measures Thursday, and Ukraine is closing schools and restaurants starting Friday.

In Latin America, some warn the worse is yet to come.

“The boost we are experiencing here in Brazil is much more serious than what was happening months ago,” said Domingos Alves, an adjunct professor at the University of Sao Paulo.

Brazil's number of patients in intensive care reached its highest level since August, just as the nation reopened shops and offices after the end-of-year holidays — and the vast country still hasn't approved or received any vaccines. Some Brazilian hospitals reinstalled refrigerated containers outside to hold the corpses of COVID-19 victims.

Mexico’s capital has more virus patients than at any point in the pandemic and is flying in doctors from less hard-hit states. Its beach resorts are readying for more cases after thousands of U.S. and European tourists visited over the holidays.

“Probably in the third week of January, we are going to see the system stressed more, that there will be more ambulatory cases and cases requiring hospitalization,” said Dr. Mauricio Rodriguez of Mexico’s National Autonomous University. He blamed the rise on fatigue with social distancing, mixed messages from public figures and Mexicans lowering their guard during the holidays.

Zimbabwe reintroduced a curfew, banned public gatherings and indefinitely suspended the opening of schools. In South Africa, which is seeing yet another fast-spreading variant of the virus and is the continent’s hardest-hit nation, authorities re-imposed a curfew, banned liquor sales and closed most beaches.

The pandemic is even reaching countries that seemed to have the virus under control.

Thailand is facing a surge that has infected thousands in the past few weeks, blamed on complacency and poor planning. The government is locking down large parts of the country, including the capital, Bangkok, and considering tougher measures.

Japan is getting ready to declare a state of emergency this week, beefing up border controls and speeding up vaccine approval after a surge of cases around New Year’s Eve.

And holiday worries aren’t over now that 2021 has arrived.

Pope Francis abandoned an annual ritual of baptizing babies in the Sistine Chapel tied to Wednesday's Epiphany holiday. Orthodox Christian countries like Russia and Greece could face more infections after they celebrate Christmas on Thursday. And China is closing schools early ahead of next month's Lunar New Year holiday, telling migrant workers not to go home and tourists to avoid Beijing.

Vaccinations are getting off to a slow start in many places. In the U.S., where over 350,000 people have died, some states are struggling to secure enough shots and organize vaccinations. The Netherlands has come under heavy criticism for being the last European Union nation to start inoculations, which it will do Wednesday. Australia isn't planning to do so until March. And most poorer countries are even further behind.

Yet India offers a glimmer of hope. Its infection rate is down significantly from a September peak, and the country is kicking off one of the largest inoculation programs in the world, aiming at vaccinating 300 million people by August.