Unions accused management of using the virus-driven economic crisis as a pretext for 900 layoffs. 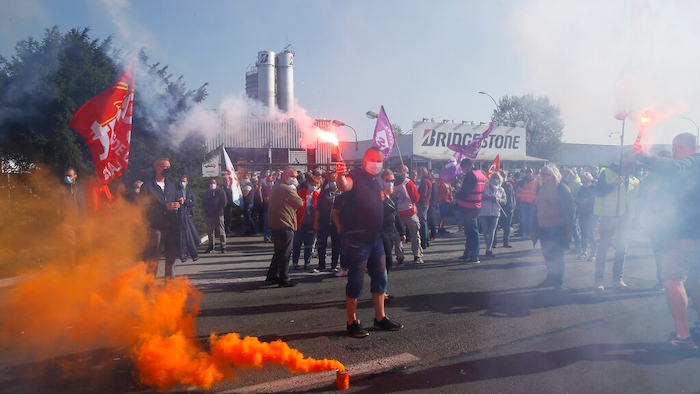 Bridgestone employees fire flares outside the tire factory of Bethune, northern France, Thursday, Sept.17, 2020. Workers protest over the Japan-based company's decision to close the plant and lay off all its nearly 900 workers. Bridgestone argues the factory is no longer competitive globally, but unions and French politicians accused the company of using the virus-driven economic crisis as a pretext for the closure and not investing in modernizing the plant instead.
AP Photo/Michel Spingler

PARIS (AP) — Workers protested Thursday at a Bridgestone tire factory in northern France over the company’s decision to close the plant and lay off its nearly 900 workers, accusing management of using the virus-driven economic crisis as a pretext to ruin livelihoods.

Japan-based Bridgestone argues the factory in the town of Bethune was already struggling before the pandemic and is the company’s “least-performing” facility in Europe. Both unions and the French government denounced the closure, saying the company should have invested in modernizing the plant instead.

Bridgestone has received French government aid from a program in recent years aimed at preserving jobs, and received more government funds to keep workers employed during and after this year’s virus lockdown under a generous state temporary unemployment scheme. The head of the powerful CGT union said the company should now return the aid.

In announcing the closure this week, Bridgestone argued in a statement that the tire market “is facing many difficulties, without even taking into account the impact of the COVID-19 pandemic." The plant specializes in replacement tires, which Bridgestone says are especially exposed to low-cost competition from Asia.

Workers waved flares and red union flags at Thursday’s protest, and listened to speakers from the French Communist Party, which helped organize the demonstration. The party accused Bridgestone of intentionally letting the factory deteriorate so that it could justify a closure “under the cover of the crisis linked to the COVID-19 pandemic.”

Finance Minister Bruno Le Maire called it a “revolting” decision, and said Thursday on CNews television that the government will fight for new solutions for the plant and its workers.

The protest came the same day that unions held a small strike on the Paris subway network and national train system and scattered protests against government policies they see as too friendly to big businesses.

France is spending hundreds of billions of euros on economic stimulus to try to recover from a strict nationwide virus lockdown and the continued closure of borders to tourists. The government is also extending nationwide temporary unemployment benefits until next summer to allow workers at struggling companies to keep their jobs.