More than one-third of families report that someone has stayed home from work to mind their children. 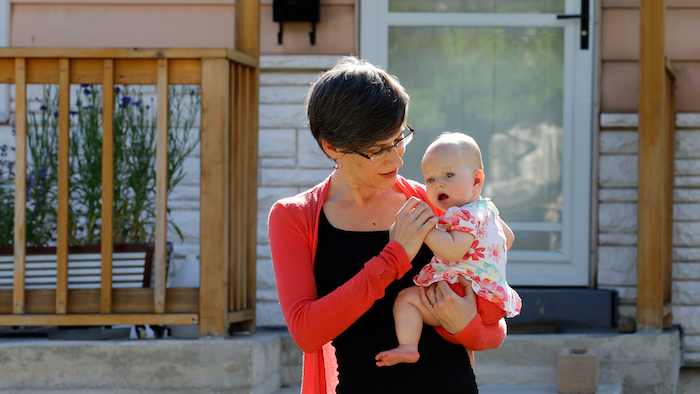 NEW YORK (AP) — A single father in New Jersey is taking unpaid leave from his job as a baker because he has no one to look after his son. A university employee in New York realizes she may never return to the office after her autistic daughter's child care center closed for good. A new mother in Utah uses vacation time to take two hours off from work each day.

The coronavirus pandemic has created a staggering child care crisis that threatens to undermine the reopening of the U.S. economy. More than one-third of families report that someone has stayed home from work to mind their children because of the outbreak, according to a nationwide survey by the Urban Institute, an economic policy research group.

Public schools in most states are closed for the remainder of the academic year. Many camps will not open this summer. Thousands of day cares are also closed, many of them following the lead of school districts, while some remain open only for children of essential workers. And the informal network of relatives and friends that many parents rely on has disintegrated in a world of social distancing.

Dan Cappilla saw other no choice but to take unpaid leave from his job as an overnight baker at a ShopRite in Manahawkin, New Jersey.

Before the pandemic his parents took turns spending the night looking after his 7-year-old son, Gavin. But he fears exposing them to the virus, especially since they live with his 90-year-old grandmother.

His manager offered him daytime hours, but with schools closed that didn't help. Cappilla needs to be home during the day to guide his son through remote lessons. Unable to pay next month’s rent, Cappilla is holding out for summer, when schooling won't be an issue and he hopes the virus will have ebbed enough for his parents to come back.

“My hands are tied," Cappilla said. “I have no solid plan.”

The uncertainty will endure for months. School officials from New York to Chicago have said remote learning may continue into at least part of the next academic year.

The National Association for the Education of Young Children, an organization of early learning professionals, estimates that half the country's child care providers are closed. A study by NAEYC and the Center for American Progress, a liberal think tank, projected that 4.5 million child care slots risk disappearing without significant aid.

KinderCare, the largest private child care provider in the country with nearly 1,600 locations, said it lost 90% of its business when lockdown and social distancing rules took hold.

The Portland, Oregon-based company initially closed all but 450 of its centers, which were left open to serve essential workers' kids. It hopes to reopen most by June.

“We’ll be in this heightened, sensitive world at least until we get a vaccine,” CEO Tom Wyatt said. “We have to get used to that.”

Congressional Democrats are introducing legislation to provide $50 billion to help child care providers offset the costs of opening safely, including procuring protective equipment and possibly enrolling fewer children to meet health guidelines. Prospects for passage are unclear, but two Republican senators, Joni Ernst of Iowa and Kelly Loeffler of Georgia, have called for the next pandemic relief package to include $25 billion for the child care industry.

Congress already allocated $3.5 billion for the child care industry under a pandemic relief bill passed in March, but the aid has been slow to reach providers. Many also have struggled to qualify for loans under a separate payroll protection program.

Laurie Fletcher, who runs a day care out of her Michigan home, has seen her income plummet since the state ordered day cares closed except for essential workers' children. But she was unable receive payroll protection because she lacked a business account and ended up laying off her full-time assistant.

"We are basically paying to stay open for the essential workers,” Fletcher said.

More than 330,000 child care workers have lost their jobs since March, according to the U.S. Bureau of Labor Statistics.

“People are going to find that if there is no child care system to return to, they aren’t going to be able to go back to work,” said Catherine White, director of child care and early learning at the National Women’s Law Center, which supported a coalition of more than 500 child care providers and advocates in calling for the $50 billion relief bill.

“Women especially are going to pay the price,” White added, noting that even before the pandemic, mothers were more likely than fathers to leave the workforce over child care difficulties. “Women are over half the workforce. What does that mean for our economy if women can’t go back to work?”

Samantha Shlimbaum, a program manager at Pace University in New York, is counting on her employer's flexibility. She was heartbroken to learn that her 3-year-old daughter's after-school center closed down. It was one of of the few that would accept Nina, who is autistic and attends a special-needs preschool.

With the preschool also closed, Shlimbaum is now working from home while caring for her daughter, who requires speech therapy. Her husband helps, but he eventually will return to work as a real estate agent.

“I can't sit in front of a spreadsheet and ensure it is 100% accurate. I get distracted with my kid in the background,” Shlimbaum said. "We might go and stay with family for a while, but beyond that, it will be the way it is.”

A rare and serious inflammatory condition in children that's linked to the coronavirus is also exacerbating child care problems.

The syndrome influenced New York City Gov. Andrew Cuomo's decision not to reopen summer school classrooms and has parents agonizing over whether to it's safe to send children to day care.

Sara Adelman, a marketing manager working from home in Salt Lake City, is burning through paid vacation time to take the last two hours off each workday to look after her 7-month-old daughter. Even so, she couldn't bring herself to put her back in day care, which reopens Monday.

“There’s a lot of different expectations," Adelman said. “It’s hard to know what the correct answer is.”