The companies allegedly misclassified their drivers as independent contractors. 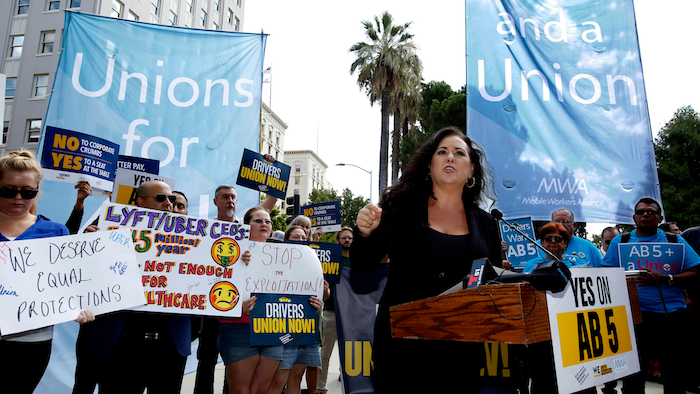 Attorney General Xavier Becerra and the city attorneys of Los Angeles, San Diego and San Francisco announced the lawsuit Tuesday. The labor law, known as AB5 and considered the nation's strictest test, took effect Jan. 1 and makes it harder for companies to classify workers as independent contractors instead of employees who are entitled to minimum wage and benefits such as workers compensation.

California represents Uber and Lyft’s largest source of revenue. The companies, as well as Doordash, are funding a ballot initiative campaign to exclude their drivers from the law while giving new benefits such as health care coverage. The initiative is likely to qualify for the November ballot.

Uber said in a statement it would contest the lawsuit in court "while at the same time pushing to raise the standard of independent work for drivers in California, including with guaranteed minimum earnings and new benefits.”

“At a time when California’s economy is in crisis with 4 million people out of work, we need to make it easier, not harder, for people to quickly start earning,” the statement said.

Lyft, however, vowed to work with the attorney general and other officials to "bring all the benefits of California’s innovation economy to as many workers as possible, especially during this time when the creation of good jobs with access to affordable health care and other benefits is more important than ever.”

Becerra highlighted the coronavirus pandemic during Tuesday's virtual news conference, saying if drivers contract the virus or lose their jobs as a result they won't have access to health care coverage and other worker protections.

“They're the ones who would have to worry about how they'll pay their bills, what they'll do in the future, how they'll survive moving forward economically,” Becerra said.

Jerome Gage, a Los Angeles Lyft driver, said in a statement that drivers haven't been given personal protective equipment during the pandemic.

“I am terrified of getting sick as passengers cough and sneeze in my car constantly. Uber and Lyft have abandoned drivers and passengers by failing to provide personal protective equipment,” said Gage, who is also a leader of the Mobile Workers Alliance, a group of Southern California drivers urging the state to enforce the labor law against Uber and Lyft. “I am unable to stay home. If I don’t drive, I have no income. I have no choice. If I don’t risk my health, I won’t have money to eat and pay my bills.”

Democratic Gov. Gavin Newsom said his upcoming state budget will include more money for state and local attorneys to file enforcement actions against companies in the gig economy that are not complying with the state’s law on worker classifications.

He said Tuesday that roughly 450,000 Californians who have filed for unemployment have done so under a program for workers in the gig economy. He said issues around how gig workers receive unemployment benefits are heightened amid the pandemic.

But members of the Protect App-Based Drivers & Services coalition said in a statement they opposed the state's lawsuit, arguing it moves to take away drivers' choices to work as independent contractors.

A federal judge in February denied Uber and Postmates' request for a preliminary injunction that would have exempted them from the law. But separately, a federal judge in January indefinitely blocked the law from applying to more than 70,000 independent truckers, deciding that it is preempted by federal rules on interstate commerce.

A state judge, however, ruled in February that Instacart, a grocery delivery company, is likely misclassifying some of its workers as independent contractors instead of employees and flouting the labor law.

The state Legislature is also considering amending the law, though lawmakers are split whether to broaden or narrow it as other groups — such as freelance writers and photographers — contend they have been hurt by it through unintended consequences.

The state's lawsuit, filed in San Francisco, alleges that Uber and Lyft haven't paid enough payroll taxes as a result of the misclassification. The suit seeks restitution for unpaid wages owed to drivers, civil penalties and a permanent ruling that would prohibit the companies from misclassifying drivers in the future.