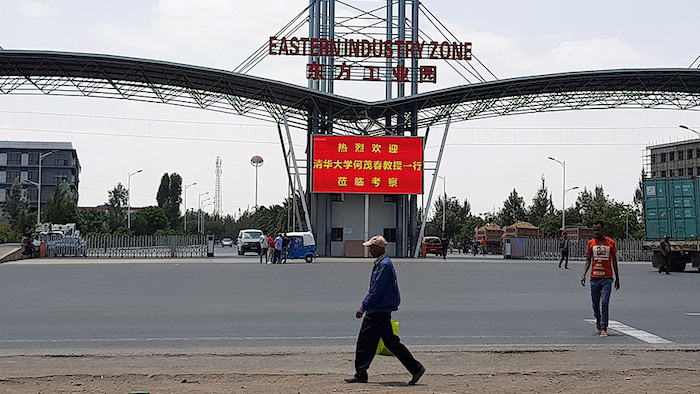 The report by the New York University Stern Center for Business and Human Rights comes as Ethiopia, one of Africa's fastest-growing economies, pursues a bold economic experiment by inviting the global garment industry to set up shop in its mushrooming industrial parks.

"The government's eagerness to attract foreign investment led it to promote the lowest base wage in any garment-producing country—now set at the equivalent of $26 a month," according to the authors of the report, Paul M. Barrett and Dorothée Baumann-Pauly.

In comparison, Chinese garment workers earn $340 a month, those in Kenya earn $207 and those in Bangladesh earn $95.

Drawn by the newly built industrial parks and a range of financial incentives, manufacturers for some of the world's best-known brands—among them H&M, Gap, and PVH—employ tens of thousands of Ethiopian workers in a sector the government predicts will one day have billions of dollars in sales.

The new report is based on a visit earlier this year to the flagship Hawassa Industrial Park that opened in June 2017 in southern Ethiopia and currently employs 25,000 people. Ethiopian leaders often show off the industrial park, 140 miles (225 kilometers) south of Addis Ababa, to visiting foreign dignitaries.

According to the report, most young Ethiopian workers are hardly able to get by to the end of the month and are not able to support family members. "I'm left with nothing at the end of the month," one factory worker, Ayelech Geletu, 21, told The Associated Press last year.

The minimum monthly living wage in Ethiopia is about $110), according to Ayele Gelan, a research economist at the Kuwait Institute for Scientific Research.

"Given relatively little training, restive employees have protested by stopping work or quitting altogether. Productivity in the Hawassa factories typically is low, while worker disillusionment and attrition are high," the report says.

It calls on the government to implement a long-term economic plan for strengthening the apparel industry and establish a minimum wage that ensures decent living conditions.

Abebe Abebayehu, head of Ethiopia's Investment Commission, told the AP that most garment and apparel factories prefer to locate in places with low labor costs.

"If that was not the case, Chinese companies wouldn't have come to Ethiopia," Abebe said. He also questioned the report's monthly pay figure of $26 per month: "That is a basic salary but in Ethiopia the factories also provide a workplace meal and other services."