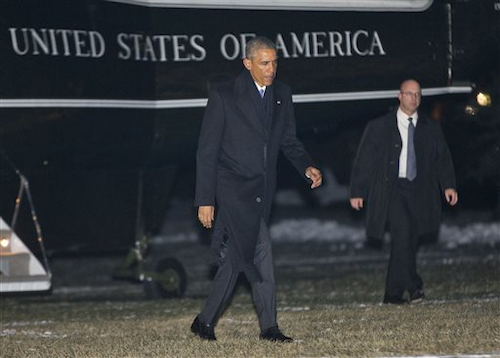 A visit to Nike headquarters on Friday allows Obama to address at least two of the three.

The giant athletic apparel company is pledging to create 10,000 jobs in the United States over 10 years with its manufacturing partners if Congress gives Obama "fast-track" trade negotiating authority that ultimately leads to the 12-country Trans-Pacific free commerce agreement.

The company says a Trans-Pacific trade deal would allow it to benefit from lower tariffs on shoes and speed up company investments in footwear manufacturing in the U.S.

But the 10,000 jobs would be a small fraction of the overseas workforce Nike relies for manufacturing. Of Nike's slightly more than 1 million factory contract workers, more than 9 out of 10 are in Asia, with the largest number in low-wage Vietnam.

Nike, with such massive outsourcing of manufacturing, also provides Obama with an opportunity to talk about labor standards he seeks to enforce with trade partners, particularly Vietnam where the U.S. concedes that worker-rights protections fall short of international standards. Of the 11 countries the U.S. is negotiating with in the Trans-Pacific talks, seven have manufacturers that contract with Nike for shoes or apparel.

Still, Obama's visit to Oregon has created a backlash. Nike represents what many liberal groups and labor unions criticize about trade deals: the potential for shifting U.S. jobs to other countries with cheap labor and few worker protections. What's more, Nike has had to overcome a bad image over its foreign contractors.

Outside a Democratic Party fundraiser Thursday night, more than 200 protesters greeted the president's arrival with chants of: "Hey, hey, ho, ho, fast track has got to go." Under the authority Obama wants, Congress could accept or reject a trade agreement, but not amend it.

Two decades ago, Nike came under heavy criticism for its use of foreign sweatshops, including numerous reports of child labor, low wages and poor working conditions. Under intense public pressure, Nike improved conditions and eventually wages climbed, minimum-age requirements were put in place and Nike increased training and monitoring at the factories.

"We've made significant improvements and driven positive change for workers in contract factories that make Nike product," Nike spokesman Greg Rossiter said in a statement to The Associated Press.

Despite the advances and Nike's image makeover, labor issues have continued to plague its contracted manufacturers. An Associated Press investigation in 2011 found that workers making Nike-owned Converse sneakers in Indonesia said supervisors abused them physically and verbally. And in its latest report on "sustainable business performance" Nike found that one-third of its contract manufacturers in 2013 did not meet its minimum standards — an improvement over 2011 when half of the manufacturers fell short. Most of the problems were over hours and wages.

"Nike fully supports the inclusion of strong labor provisions because we believe they will drive higher industry standards and create economic growth that benefits everyone," Nike's Rossiter said.

But a Government Accountability Office report last year found that while some Latin American countries under current free-trade agreements have taken steps to strengthen labor rights, enforcement was limited and monitoring of labor standards in those countries by U.S. agencies was inconsistent.

Rep. Earl Blumenauer, a Democrat who represents Portland and is supporting Obama's trade agenda, is pushing for an enforcement trust fund to improve oversight.

"I agree enforcement is a problem," Blumenauer said. "I'm not through trying to make it better."

Obama's toughest sell is with his own Democratic allies, who fear the loss of American jobs and weakened financial and environmental rules.

The White House has been courting Democratic fence sitters, arguing that export-dependent industries pay higher-than-average wages and that while job losses have affected some industries, trade deals have been good for the U.S. economy overall.

Obama has tried to reassure skeptics that these trade deals would have enforceable labor and environmental standards. He invited a handful of fence-sitting Democratic senators, including Sen. Tim Kaine of Virginia, to the White House on Wednesday.

But Obama faces an uphill fight. The last time Congress gave a president negotiating authority was in 2002 under President George W. Bush. The vote was heavily Republican, with only 29 House Democrats voting in its favor.

The White House believes there are about 60-70 House Democrats who are persuadable, according to a person familiar with the White House strategy. The person was not authorized to be named and requested anonymity. But even trade advocates say Obama faces a struggle to just get half of those Democratic votes.

Is Workplace Rudeness on the Rise?