The United States is on pace to add about 2.6 million jobs this year under President Donald Trump's watch. 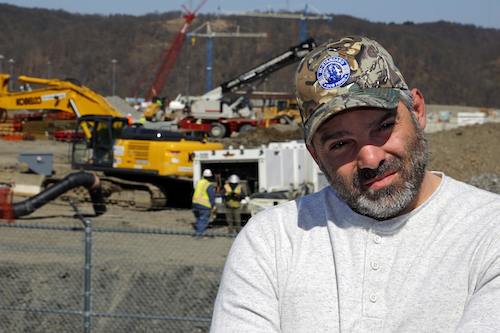 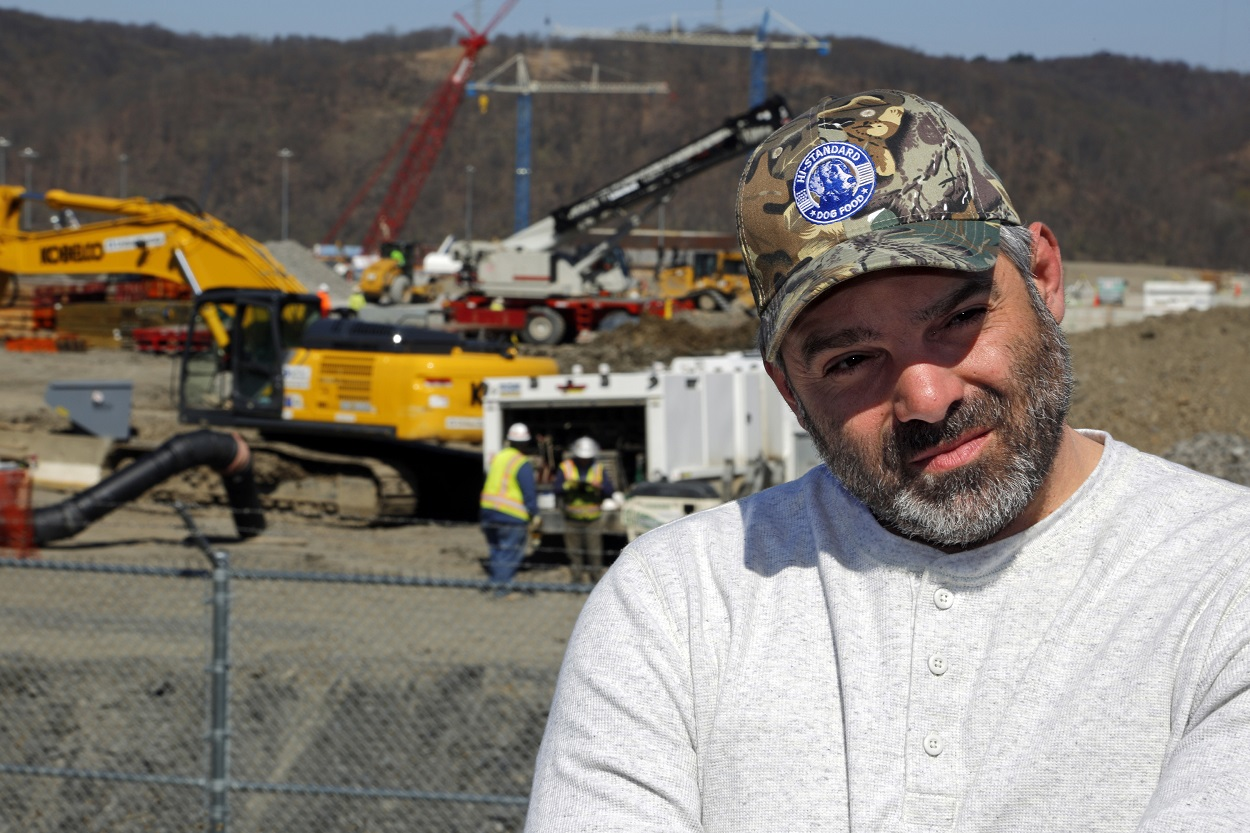 In this April 30, 2018 photo, Chip Kohser, the Beaver county Republican chairman, stands overlooking the construction of a chemical plant on the banks of the Ohio River near Beaver, Pa., that will help convert natural gas into plastic, creating hundreds of jobs in an area that has seen population dwindle since the collapse in the 1980's of the steel industry. Image credit: AP Photo/Gene J. Puskar

The United States is on pace to add about 2.6 million jobs this year under President Donald Trump's watch. Yet the bulk of the hiring has occurred in bastions of Democratic voters rather than in the Republican counties that put Trump in the White House.

On average for the year-ended this May, 58.5 percent of the job gains were in counties that backed Democrat Hillary Clinton in 2016, according to an Associated Press analysis of monthly government jobs data by county.

The jobs data shows an economy that is as fractured as the political landscape ahead of the 2018 midterm elections. As more money pools in such corporate hubs as Houston, San Francisco or Seattle, prosperity spills over less and less to smaller towns and cities in America's interior. That would seem to undercut what Trump sees as a central accomplishment of his administration — job creation for middle class and blue-collar workers in towns far removed from bustling urban centers.

Job growth in Trump's economy is still concentrated in the same general places as it was toward the end of Barack Obama's presidency — when roughly 58.7 percent of the average annual job gains were in Democratic counties.

Yet the lack of transformative job growth in Trump areas hasn't seemed to erode his support among Republicans, while hiring in Democratic areas have done little to improve his standing with those voters. For Trump's core supporters, cultural issues such as gun rights, immigration and loyalty to the president have become dominant priorities.

Trump has pointed with pride at a strengthening national economy in hopes that voters will reward the Republican Party by preserving its majorities in the House and Senate this year. The government reported the fastest quarterly economic growth since 2014 and the unemployment rate is a healthy 3.9 percent. At a Pennsylvania rally on Thursday, the president declared, "Our economy is soaring. Our jobs are booming."

But other issues preoccupy the minds of the party faithful in Trump strongholds such as Beaver County, Pennsylvania, northwest of Pittsburgh.

Chip Kohser, the county Republican chairman and the bristle-bearded founder of a farm share company, said his party members are rallying around their staunch opposition to gun control.

"Our No. 1 motivating factor," he said, "is Second Amendment issues."

Kohser, 41, drives a white pickup truck, smokes cigars and views America as being jaggedly splintered along ideological lines that make it hard to find common ground. Democratic calls for stricter gun control in the aftermath of mass shootings, he said, are fueling more zeal among his Republican volunteers than are the $1.5 trillion in tax cuts that Trump signed into law last year.

Since May 2017, Beaver County has lost 191 jobs. With the warmer summer weather, hiring is now on an upswing. But employers have fewer job applicants available as the labor force has shrunk by roughly 1,000 workers in the past 12 months, the result of decades of population loss that hit former steel towns such as Aliquippa, Beaver Falls and Midland.

The tax cuts haven't stopped the outflow of people. Chatting over eggs, bacon and home fries, Kohser estimated that the tax cuts have added perhaps $1,200 to his annual household income and roughly the same to many others in the area — not likely enough on its own to rejuvenate the local economy.

The United States is full of places like Beaver County. They are areas where the currently robust national economy and job market obscure long-standing woes that generations of politicians have struggled to reverse. There are the long-shuttered factories, stagnant incomes and the departure of college-educated workers to cities and surrounding suburbs.

Many of those forgotten men and women might cheer the president for slapping tariffs on imported goods to defend U.S. factory jobs or his vow to build a wall on the Mexican border to block illegal immigration. But for struggling communities waiting for jobs to be restored, Trump's tax cuts — which were skewed toward corporations and wealthy individuals — have yet to deliver.

During the past year, the healthiest job gains have been in counties containing such vibrant cities as Houston, Dallas, Los Angeles, Las Vegas and Seattle, all of them places that have favored Democrats.

Texas, which Trump won handily, reflects the geographic split in the economy. Within that state, Clinton — not Trump — won the counties that have accounted for bulk of that state's job growth.

Though public opinion surveys suggest that the economy gives an advantage to Trump and the Republicans, the economy no longer packs as big a punch with the electorate.

When the Pew Research Center asked voters in June to identify the nation's most pressing issue, more of them chose immigration, race, political gridlock or Trump himself than the economy. The proportion of people who said the economy was their top priority fell to its lowest level in more than eight years.

Sixty percent of Americans told Pew that they see their midterm vote as an act of either supporting the president (26 percent) or opposing him (34 percent). That is the highest combined number since Pew began asking such a question in 2006.

And 68 percent said that control of Congress would influence how they vote, the highest level in two decades.

Since the 1970s, Americans have also moved further apart on matters of "political ideology," according to research published in June by University of Chicago economists Marianne Bertrand and Emir Kamenica. Their work found that conservatives and liberals have become more sharply split on such issues as confidence in the government and social institutions, religious participation and stances on marriage, sex and abortion.

In Pennsylvania, many Democrats see the choices made by Trump as putting democracy itself at risk. Their fears stem in part from his administration's initial policy of separating refugee children from their parents and his seemingly deferential relationship with Russian President Vladimir Putin, whose nation interfered in the 2016 election, according to U.S. intelligence agencies.

"What I'm hearing daily is fear amongst people as to whether their democracy is slipping away from them," said Nancy Mills, the Pennsylvania Democratic chairwoman. "I'm really hearing that more than anything else."

She then added, "This situation at the border was really a wake-up call and frightening."

Trump has described his crackdown on undocumented immigrants, refugees and his efforts to limit legal immigration as positive for the country. Yet the economic growth he promised would revitalize Beaver County may depend on its ability to attract immigrants as it did a century ago when the steel mills brought Germans, Italians and Eastern Europeans workers to the area.

Beaver County never fully recovered from the steel mill closures in the 1980s that caused the unemployment rate to spike at nearly 30 percent.

Many young workers with college degrees migrated east for Pittsburgh's technology and medical care jobs. The result of this population flight is that Beaver County is rapidly aging, with a median age of 44.8 years old, compared with 37.7 nationwide and 32.9 in Pittsburgh.

If the area weren't suffering from a dwindling population, employers say they would have more workers to hire and the county would have job gains rather than losses. Local business groups see the possibility of a vibrant future because the county sits atop a massive reserve of natural gas. On the banks of the Ohio River, an army of cranes are building a chemical plant that helps to convert the natural gas into plastic — a source of hundreds of jobs.

A congressman since 2013, Rothfus bears the calm, bespectacled manner of a professor. He faces a tough re-election battle in Pennsylvania's newly created 17th District against Democrat Conor Lamb, who won a special election House victory earlier this year. Both Rothfus and Lamb's current districts were redrawn this year by court order.

Sitting outside a cafe before the chamber meeting, Rothfus said there was a clear path for generating job growth: Immigrants.

"You look at areas of the country that are really thriving — there's a significant immigrant population," he said. "We need to do a better job of attracting immigrants here. This place was built on immigrants."

But Rothfus has also been outspoken on the importance of tighter border security. A few weeks after the chamber meeting, he voted for a bill that, had it passed, would have imposed tougher border measures and likely curbed legal immigration.

When asked if voters would make their choice this November based on the health of the economy, Rothfus said, emphatically, yes. His belief is that the tax cuts and pullback on regulations by Trump would help give him an edge.

"I think you look at the choice we have: Do we want to have more government and higher taxes or more jobs and higher wages?" he said. "That's a pretty compelling argument."

As of now, Beaver County is still waiting on the job surge.