Romney and Obama prominently collided during the campaign over the fate of the tax credit. Romney has called for its expiration, while Obama supports its renewal. Amid the gridlock, Vestas has closed offices and laid off hundreds of U.S. workers. Wind businesses from South Carolina to Washington state also have cut jobs. 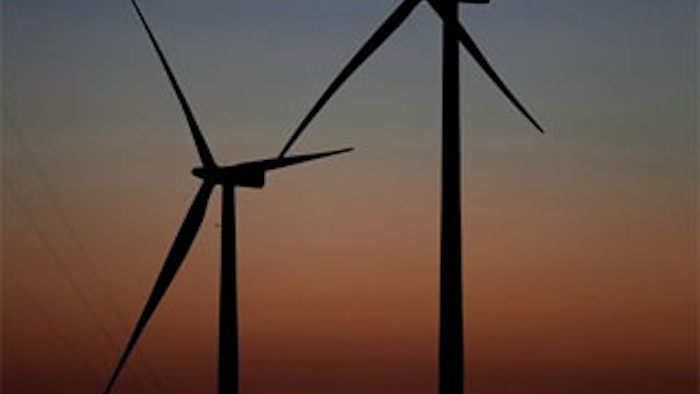 DENVER (AP) — An eerie quiet has settled over the Walker Components plant, which assembles custom cables for a global wind turbine company. Orders are down from earlier in the year and one-third of its employees have been laid off this year.

"At the beginning of this year we just didn't feel we had enough time, and now we've got too much time on our hands," one of its workers, 25-year-old Calvin Huddleston said. "I really thought wind would be a sustainable business."

The wind energy boom President Barack Obama touted as key to his energy strategy has hit a wall in an election-year dispute over taxpayer support for renewable energy.

The government poured billions of dollars into renewable energy, hoping to unleash a wave of good-paying, high-tech manufacturing jobs. But federal spending to support development of green energy has dropped sharply— 75 percent since 2009 — amid tea party criticism that it's wasteful. Congress' failure to extend past December the production tax credit, a wind-energy tax break first signed into law by Republican President George H.W. Bush, has contributed to job cutbacks from South Carolina to Washington state.

"The green bubble is starting to fall apart," said Tom Borelli, a fellow at the tea party group FreedomWorks. "How much longer can we fund things that are not cost-competitive?"

Republican presidential nominee Mitt Romney and Obama prominently collided during the campaign over the fate of the tax credit. Romney has called for its expiration, while Obama supports its renewal. The credit stalled in Congress this summer in the face of opposition from House Republicans, and the last chance to extend it comes in December's lame-duck session. Amid the gridlock, Vestas, the Danish company that Walker Components supplies, closed offices and laid off hundreds of U.S. workers. Wind businesses from South Carolina to Washington state also have cut jobs.

Even some Republicans who supported extending the credit, including three of Colorado's four GOP congressmen, were surprised at Romney's opposition. He argues it gave the industry an unfair advantage over its oil and gas competitors.

"In one year, you provided $90 billion in breaks to the green energy world," Romney told Obama at the first presidential debate in Denver.

"Now, I like green energy as well, but that's about 50 years' worth of what oil and gas receives."

The Energy Department recently found that the natural gas and petroleum industries altogether accounted for about $2.8 billion in federal energy subsidies in the 2010 fiscal year and about $14.7 billion went to renewable energies. The figures include both direct expenditures and tax credits.

Environmentalists argue that fossil-fuel industries have been publicly supported since a young federal government levied a tariff on coal imports in the late 18th century.

"Every form of energy has incentives. We're up against 90 years of incentives for other forms of energy," said Peter Kelley, a spokesman for the American Wind Energy Association. "Plenty of people consider tax credits a good, Republican way of fostering business."

Sen. Mark Udall, D-Colo., said the oil industry benefits from billions of dollars in hidden subsidies, like American troops' presence near the Middle East. "We're underinvesting in renewable, 21st century alternative energy, especially in comparison to the Europeans, the Chinese, even the Brazilians," Udall said.

By next year, federal spending on renewable energy will have dropped 75 percent from its 2009 high of $44.3 billion. Part of the shrinkage comes from stimulus programs ending. But part also comes from Congress not wanting to pour more funds into renewables.

"We're entering a brave new world here, a definite lessening of support from Washington," said Mark Muro, a senior fellow at the Brookings Institution. "There's a substantial fiscal problem, which is real, and the need to restrain domestic budgets."

The turn has spooked the wind industry, which expanded even during the Great Recession. A study for the wind energy association estimated that expiration of the industry's production tax credit would cost 37,000 jobs. And in the past few months, wind manufacturers and developers began cutting back.

Kaydon Corp. announced in October it was closing one of three plants in Sumter, S.C., that makes bearings for wind turbines. LM Wind Power said it was laying off 300 workers at its plant in Grand Forks, N.D., and days later announced it was creating up to 300 jobs at a new factory in Brazil. Katana Summit, a Columbus, Neb., based wind tower manufacturer, said it would close plants in Nebraska and Washington state, laying off nearly 300 workers.

In Colorado, Vestas, the world's largest wind turbine manufacturer, has reduced staff by 20 percent, or about 500 people. On Wednesday, Vestas announced it also was closing a research office near Boulder.

That's hurt Walker Components. Company president Craig Walker invested more than $4 million in the cable assembly plant after Vestas moved to Colorado in 2009 and enlisted his company as a supplier. Now Walker is moving some workers to other plants he owns to avoid cutting more jobs.

"This is not a Solyndra," Walker said, referring to the bankrupt solar panel manufacturer that received $528 million in loan guarantees from the Obama administration. "This is a company that was up and functioning and making money."

Huddleston, who worked his way up from the assembly line to production manager, is an undecided voter.

"It's been very hard for me to decide," he said. But, he added, he may "lean Obama, just for the green side."