Kellogg Co. is shuttering distribution centers around the nation and cutting more than 1,000 workers, as it follows through with a cost-cutting plan amid falling sales. 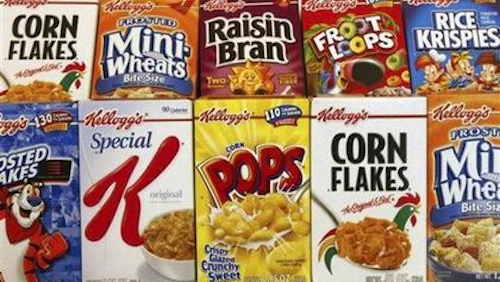 NEW YORK — Kellogg Co. is shuttering distribution centers around the nation and cutting more than 1,000 workers, as it follows through with a cost-cutting plan amid falling sales.

The maker of Frosted Flakes, Pop Tarts and Eggo waffles notified agencies in several states of the closures this week.

Earlier this year, Kellogg said it would close nearly 40 distribution centers and use a warehouse system. It said it would be ending direct delivery of products to supermarkets and big-box retailers and instead ship those products to warehouses before they move to retailers' distribution centers. That's a system the company already was using for the majority of its products.

The company said the move would free up money to invest in activities like advertising that more directly help boost sales.

Kellogg and competitors like General Mills and Post have been cutting costs and changing strategies as consumer trends shift away from processed foods in North America, a key market for Kellogg. Sales have been declining since 2013 at Kellogg.

The company said it won't disclose specifics on jobs cuts and the location of facilities slated to close, though it is required to notify various state agencies about facility closures.

The Battle Creek, Michigan-based company will shut down a distribution center in Memphis and lay off 172 workers. It will close a center in Sharonville, Ohio, and lay off nearly 250 employees. Other closings include centers in Houston and Fort Worth, Texas, affecting 420 workers. Facilities in Charlotte and Greensboro, North Carolina, will also close, affecting 500 workers.