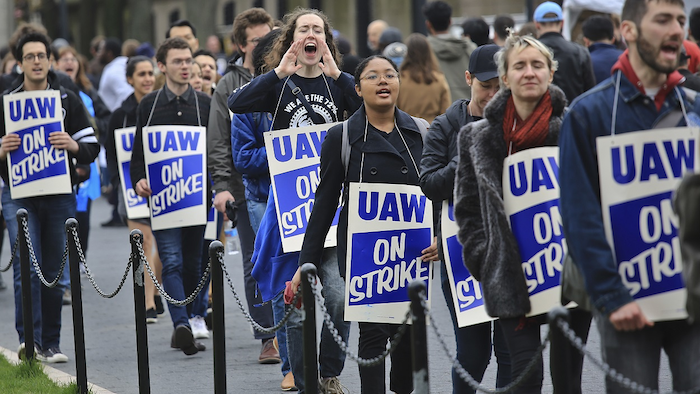 Their membership has been declining for decades. They've been bedeviled by crippling new laws, and by a devastating U.S. Supreme Court decision just this week. From all appearances, it would seem that labor unions are an endangered species.

But here's the surprise: Organized labor is showing new signs of life.

Last year, labor netted 262,000 new recruits. The movement notched several high-profile wins this spring, organizing 5,000 teaching assistants and graduate students at Harvard and winning an election in a small unit at Boeing in South Carolina, the state with the lowest union density in the nation.

It's not just that unions are gaining members — they're also getting more aggressive. The union representing Las Vegas workers voted to strike at Strip casinos and won concessions at some this month, while 250,000 Teamsters authorized a strike at UPS earlier this month before reaching a tentative deal late last week. And, most prominently, tens of thousands of teachers walked out in conservative states from West Virginia to Arizona, winning concessions on education funding that had been cut deeply during the recession.

Mike Hinton, a 39-year-old UPS delivery driver and Teamsters member in Campbellsville, Kentucky, said the teachers were an inspiration to his fellow workers who voted overwhelmingly to authorize a strike when their contract expires July 31, and to several friends who have bemoaned that their own workplaces have not been organized by a union.

"There's kind of a spark going on now with unions," Hinton said. "It's not huge — it's just a spark."

Even a spark is significant given the decades-long drop in organized labor, which in 1980 represented 20 percent of the U.S. workforce and now only includes 10.7 percent. The Republican takeover of state governments over the past decade has added several new hurdles for a movement that typically backs Democrats — Wisconsin and Ohio limited the ability of public sector unions to negotiate for their members and 28 states now allow people represented by unions to decline to pay dues, limiting labor's financial clout.

One of the biggest blows came on Wednesday, when the Supreme Court ruled that government workers who declined to join labor unions that represent them in collective bargaining cannot be forced to contribute to those unions.

Yet despite — or perhaps because of — the setbacks, union members seem more willing to take risks. The initial teacher's walkout in West Virginia, for example, continued even after union leaders cut a deal to bring teachers back into the classrooms — the energized grassroots refused to return to school until they got a better agreement.

"I don't know if locals have been unusually organized rather than things have just gotten very, very bad," said Moshe Marvit, a Pittsburgh-based labor attorney and fellow at the Century Foundation.

He noted the teachers' actions were most aggressive in states where teachers were paid the lowest and have shouldered the biggest cuts. Despite the lowest unemployment rate in decades, the government reported this month that wages last year increased below the rate of inflation — meaning the typical worker effectively suffered a pay cut. At the same time the reduced unemployment rate also lessens the still real risks of organizing or job actions like strikes, because businesses are having a harder time finding workers.

The increase in "right to work" laws that allow people represented by unions to opt out of paying dues means the people continuing to be involved in unions will be the most committed. And, some labor advocates and experts noted, the rising number of government moves against unions — climaxing in Wednesday's Janus decision — may be encouraging radical actions like the teacher walkouts, which skirted laws against strikes by educators in several states.

"Since organized labor is basically illegal today, labor might as well engage in various forms of illegality, in uprisings and demonstrations that send a shot across the bow of capital," said Nelson Lichtenstein, a labor historian at the University of California-Santa Barbara.

Unions have also turned to new, sometimes unexpected frontiers to gain members. The United Auto Workers lost two attempts to organize southern auto plants in 2016 and last year, but they have successfully organized graduate students, who can become union members thanks to a 2016 ruling during the Obama's administration. They were the union that organized Harvard teaching assistants and researchers, part of a shift to white-collar employees that has raised concerns among some that union membership might just become another perk of having a higher education degree.

Justin Bloesch, an economics graduate student at Harvard, isn't worried about that. "Even people with college degrees feel a lot of economic pressure," said Bloesch, 26, who decided he can't afford to have children during his graduate studies because his compensation is too low.

He spoke on his way back from the UAW's annual meeting where he rubbed shoulders with the union's more blue-collar members. "To have those sort of connections makes it more powerful," Bloesch said.

Richard Trumka, president of the AFL-CIO, an umbrella group for most unions, said the uptick in union energy stems from the same impulse that brought people together for the Black Lives Matter movement against police violence and the Womens March against the Trump administration. "It's collective action that's tying everyone together," Trumka said in an interview. "People are saying 'we can't do it alone, we have to come together.'"

Still, increased labor activism doesn't always overlap with increased liberal organizing. In deep red states like Kentucky and Oklahoma, teachers who walked off their jobs were careful not to cross over into national debates, confining their protest to local issues. "You have 50,000 teachers in West Virginia that strike — how do you get them to change their political affiliation?" Marvit asked. "I'm not sure anybody has cracked that."

Right now the rank-and-file generally doesn't see its struggle with employers in the context of the Trump administration, said Fred Zuckerman, president of Teamsters Local 89 in Kentucky: "They're totally separate worlds."

Kentucky includes one of the hubs for UPS, employing 10,000 union members. Nationally, 93 percent Teamsters members in UPS voted to authorize a strike, pushing for a variety of changes in their next contract on mandatory overtime for drivers, wages and the company's ability to hire new workers at lower pay and benefit scales. Last week, UPS reached a tentative agreement with the union that lays the groundwork for new Sunday shifts but includes pay raises for part-timers from $10.35 an hour to $15.50 and for drivers from $19 an hour to $34.74 over the next four years. Membership will vote on whether to accept the deal in the coming weeks.

Hinton, the driver, noted that no one wants to suffer the financial consequences and disruption of a strike, so it's a testament to workers' frustrations that they voted for one. He is exhausted after routinely having to work 10-hour days and longer. "There has to be a time when we can be just human and be with our families," he said.

Amy Grubbs, 42, has worked at UPS for 12 years, starting her shift at 1:15 am to unload packages in the company's Louisville plant. Because of her seniority she makes $19 an hour but she is technically a part-timer, and she thinks the proposed contract wouldn't increase her pay. She's ready to vote against it.

"You're a multibillion dollar company and you want to nickel-and-dime us to death," she said. "We're having to stand up and fight back."