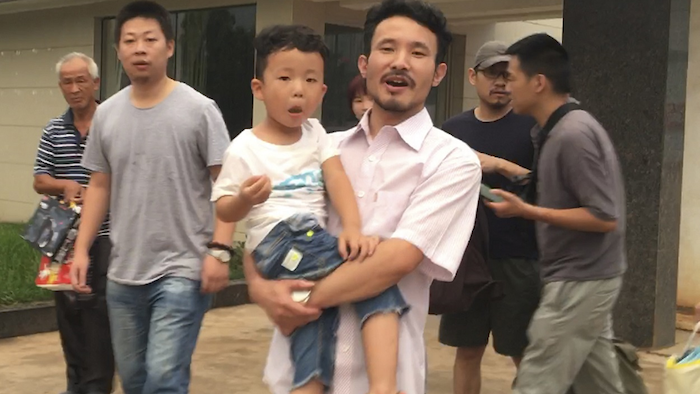 "Of course I am happy," said Deng Guilian, the wife of one of the investigators. "It has been a hard year. I hope all the bitterness we had is worth it."

Last May, the activists were arrested and detained for a month as they gathered evidence of low pay and excessive overtime, as well as physical and crude verbal abuse at a Huajian Group shoe factory in the southeastern Chinese city of Ganzhou.

Huajian has dismissed those allegations as false and said the men were conducting industrial espionage.

Police pressured the investigators into signing documents stating that their actions caused the Huajian Group a financial loss — which could give Chinese authorities ongoing leverage, according to China Labor Watch founder Li Qiang.

"This is the police plan to give them potential pressure to control them," Li said, adding that police also warned the men not to "make trouble."

Though the men have been out of jail for a year, under the terms of their bail they've been subject to travel restrictions and police surveillance — conditions that now should be lifted.

Deng's husband, Hua Haifeng, hopes to travel to the United States in July for a four-month stint as a visiting researcher at Cornell University in Ithaca, New York, according to a letter of invitation provided by China Labor Watch.