Strike that lasted 16 days at an Alliance Interiors plant near Lansing ended Thursday with workers approving their first labor contract.

DELTA TOWNSHIP, Mich. (AP) -- A 16-day strike at an Alliance Interiors plant near Lansing ended Thursday with workers approving their first labor contract.
Art Luna of the United Auto Workers announced the deal shortly after noon.
Alliance Interiors Chairman and CEO Earle Higgins Sr. said the company is very pleased with the deal.
''We look forward to continued success in the Lansing area,'' he said through a spokeswoman.
The 42-month contract was approved by 96 percent of the workers represented by UAW Local 724. Luna said the new deal includes a pay increase, but he would not elaborate.
He added that the rate at which workers go back to work at Alliance might depend less on the Alliance contract than on a separate strike at General Motors Corp.'s Lansing Delta Township assembly plant.
UAW Local 602 workers have been on strike since April 17 over local contract issues at the plant just west of Lansing.
Doug Rademacher, UAW Local 602 president, said he thinks a settlement between GM and the striking workers might follow soon.
GM spokesman Dan Flores said negotiations are continuing with the union at factory that makes the hot-selling Buick Enclave, Saturn Outlook and GMC Acadia crossover models.
Latest in Labor 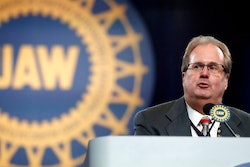 It amounts to approximately 5% of its global workforce.
January 26, 2023

Walmart Workers to Get Pay Raises