Auto supplier Delphi is reporting that it has reached an agreement with General Motors Corp. (GM) and the United Auto Workers union (UAW) to buyout thousands of hourly workers.

Auto supplier Delphi is reporting that it has reached an agreement with General Motors Corp. (GM) and the United Auto Workers union (UAW) to buyout thousands of hourly workers. The proposal is still subject to approval by a bankruptcy court.

The proposal will allow approximately 5,000 workers to return to Delphi's former parent company, GM. An additional 13,000 workers will be offered a buyout lump sum payment of up to $35,000 to retire. As part of the plan, GM would pay for the buyouts, as well as some post-retirement benefits. Delphi filed for bankruptcy in October of last year. The Troy-based company is currently the largest U.S. auto supplier and GM's primary parts supplier.
Read Next 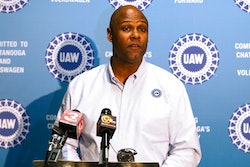 The company said the cuts stem from the fallout of a Generac part called a SnapRS.
September 12, 2022

Companies no longer have to make that trade-off thanks to recent material handling innovations.
September 9, 2022

Railroads Say Strike Would Cost $2B a Day

The estimate aims to apply pressure to unions ahead of a key deadline.
September 9, 2022