Tech Titans Face Off In Court Over iPhone, iPad

Apple and Samsung will square off in a closely watched trial over control of the U.S. smartphone and computer tablet markets. 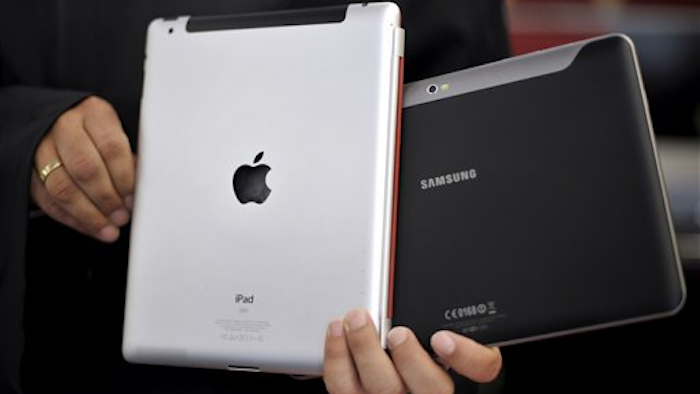 SAN FRANCISCO (AP) — Two tech titans will square off in federal court Monday in a closely watched trial over control of the U.S. smartphone and computer tablet markets.

Apple Inc. filed a lawsuit against Samsung Electronics Co. last year alleging the world's largest technology company's smartphones and computer tablets are illegal knockoffs of its popular iPhone and iPad products. The Cupertino-based company is demanding $2.5 billion in damages, an award that would dwarf the largest patent-related verdict to date.

Samsung counters that Apple is doing the stealing and that some of the technology at issue — such as the rounded rectangular designs of smartphones and tablets — has been industry standards for years.

The U.S. trial is just the latest skirmish between the two over product designs. A similar trial began last week, and the two companies have been fighting in courts in the United Kingdom and Germany. The case is one of some 50 lawsuits among myriad telecommunications companies jockeying for position in the burgeoning $219 billion market for smartphones and computer tablets.

In the United States, U.S. District Judge Lucy Koh in San Jose last month ordered Samsung to pull its Galaxy 10.1 computer tablet from the U.S. market pending the outcome of the trial, though the judge barred Apple attorneys from telling the jurors about the ban.

"That's a pretty strong statement from the judge and shows you what she thinks about some of Apple's claims," said Bryan Love, a Santa Clara University law professor and patent expert. Love said that even though the case will be decided by 10 jurors, the judge has the authority to overrule their decision if she thinks they got it wrong.

"In some sense the big part of the case is not Apple's demands for damages but whether Samsung gets to sell its products," said Mark A. Lemley, a Stanford Law School professor and director of the Stanford Program in Law, Science, and Technology.

Lemley also said a verdict in Apple's favor could send a message to consumers that Android-based products such as Samsung's are in legal jeopardy. A verdict in Samsung's favor, especially if it prevails on its demands that Apple pay its asking price to certain transmission technology it controls, could lead to higher-priced Apple products.

Lemley and other legal observers say it's rare that a patent battle with so much at stake doesn't settle short of a trial. Court-ordered mediation sessions attended by Apple's chief executive Tim Cook and high-ranking Samsung officials failed to resolve the legal squabble, leading to a highly technical trial of mostly expert witnesses opining on patent laws and technology. Cook is not on the witness list and is not expected to testify during what is expected to be a four week-trial.

Lemley, Love and others say it also appears that Apple was motivated to file the lawsuit, at least in part, by its late founder's public avowals that companies using Android to create smartphones and other products were brazenly stealing from Apple. To that end, Samsung's attorneys made an unsuccessful pitch to have the jury hear excerpts from Steve Jobs' authorized biography.

"I will spend my last dying breath if I need to, and I will spend every penny of Apple's $40 billion in the bank, to right this wrong, I'm going to destroy Android, because it's a stolen product," Jobs is quoted as saying in Walter Isaacson's book "Steve Jobs" published in November. "I'm willing to go thermonuclear war on this."

But the judge barred those statements in a ruling earlier this month.

"I really don't think this is a trial about Steve Jobs," Koh said.

Apple lawyers argue there is almost no difference between Samsung's products and Apple's and that the South Korean company's internal documents show it copied Apple's iconic designs and its interface.

"Samsung once sold a range of phones and a tablet of its own design," Apple lawyers argue in their documents filed Wednesday. "Now Samsung's mobile devices not only look like Apple's iPhone and iPad, they use Apple's patented software features to interact with the user."

Samsung denies the allegation and counter-charges that Apple copied its iconic iPhone from Sony. Samsung lawyers noted that the company has been developing mobile phones since 1991 and that Apple jumped into the market only in 2007.

"In this lawsuit, Apple seeks to stifle legitimate competition and limit consumer choice to maintain its historically exorbitant profits," Samsung lawyers wrote in their trial brief also filed Wednesday. "Android phones manufactured by Samsung and other companies — all of which Apple has also serially sued in numerous forums worldwide — offer consumers a more flexible, open operating system with greater product choices at a variety of price points as an alternative to Apple's single, expensive and closed-system devices."

"One thing that is notable is that this trial is happening at all," said Love, the Santa Clara law professor and patent expert. He said that in an industry such as this where so many companies hold so many vital patents needed by all players, lawsuits are viewed as toying with "mutually assured destruction" and that most disputes are solved through "horse trading" and agreements to share intellectual property and royalties.