A New Mexico startup is betting on automakers to develop hydrogen cars and wants to provide material for them as nations and companies scramble to bring pollution-free vehicles to drivers. 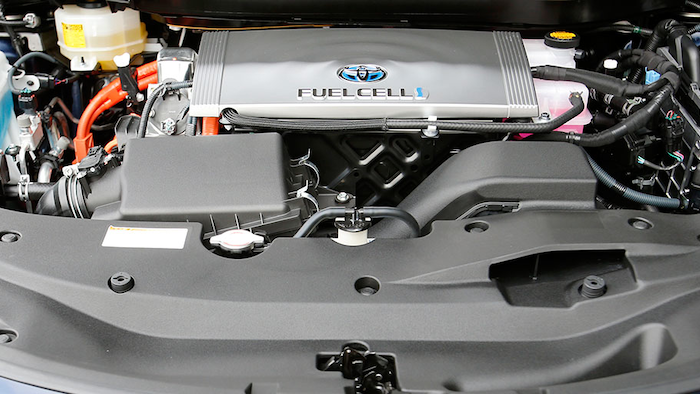 ALBUQUERQUE, N.M. (AP) — A New Mexico startup is betting on automakers to develop hydrogen cars and wants to provide material for them as nations and companies scramble to bring pollution-free vehicles to drivers.

"Every fuel cell vehicle is going to need material like what we produce," Stephenson said.

Fuel cell vehicles are zero-emission, running on power produced when hydrogen combines with oxygen in the air to create water.

Stephenson's company of 17 employees is creating a thin film built directly into the hydrogen fuel cells. He dubbed the material Pajarito Powder, which is inspired by Pajarito Mesa — the site of Los Alamos National Laboratory.

Japan announced in May that it was backing a push for pollution-free vehicles that run on hydrogen. It is planning to build more hydrogen fueling stations so that fuel-cell vehicles on roads will grow to 40,000 by 2020.

Now, only a handful of such vehicles are on the roads, partly because of the scarcity of hydrogen stations.

Tokyo-based Honda, for instance has delivered only 245 of its latest Clarity fuel-cell vehicles in Japan, and the U.S. Toyota has delivered about 3,000 of its Mirai fuel cell cars.

The need for vehicles equipped with such futuristic technology is expected to grow because of concerns about pollution and global warming.

Automakers and energy companies have been working together on fuel cells, viewing such collaboration on investing in the technology, including the infrastructure of hydrogen stations, and agreeing on standards as crucial for its success.