A Japanese industrial group unveiled Thursday a robot designed for underwater probes of damage from meltdowns at the Fukushima Dai-Ichi nuclear plant after the March 2011 earthquake and tsunami. 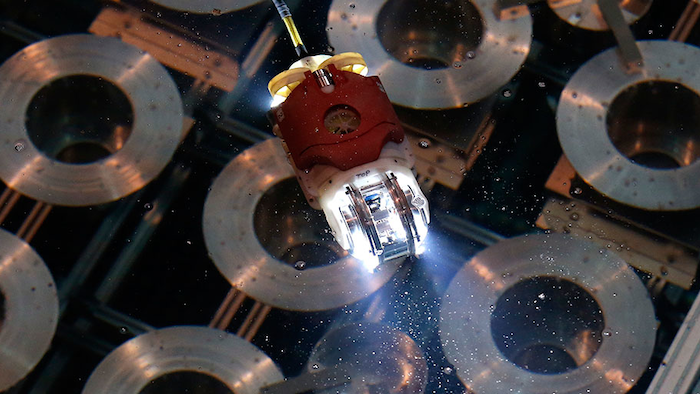 YOKOSUKA, Japan (AP) — A Japanese industrial group unveiled Thursday a robot designed for underwater probes of damage from meltdowns at the Fukushima Dai-Ichi nuclear plant after the March 2011 earthquake and tsunami.

Remote controlled robots are key to the decades-long decommissioning process for the plant. But super-high radiation and structural damage inside the reactors hampered earlier attempts to inspect areas close to the reactors' cores.

The developers say they plan to send the new "mini manbo," or "little sunfish," probe into the primary containment vessel of Unit 3 at Fukushima in July to study the extent of damage and locate parts of melted fuel thought to have fallen to the bottom of the chamber, submerged by highly radioactive water.

The robot, about the size of a loaf of bread, is equipped with lights, maneuvers with tail propellers and collects data using two cameras and a dosimeter.

During Thursday's demonstration at a test facility near Tokyo, the probe slowly slid down a rail and glided across the water. A team operated it remotely, with one guiding the robot while another adjusted a cable that transmits data and serves as the robot's lifeline. The probe entered a mock-up of a containment vessel, its lights glowing in the murky water.

Officials want to send the probe swim deep into the reactor to illuminate the area underneath its core.

"The major advantage is it can avoid various obstacles," said Tsutomu Takeuchi, a senior manager at the nuclear energy division of Toshiba, the electronics and energy company charged with helping clean up the plant.

Japan hopes to locate and start removing fuel from the reactors after Tokyo's 2020 Olympics.

Snake and scorpion-shaped robots tested earlier became stuck inside two reactors. The scorpion robot's crawling function failed and it was left inside the plant's Unit 2 containment vessel. The other, designed to clear debris for the "scorpion" probe, was called back after two hours when two of its cameras stopped working after its total radiation exposure reached 1,000 Sievert — a level that would kill a human within seconds. The plan had been to use the robot for 10 hours at an exposure level of 100 Sievert per hour.

The swimming robot was co-developed Toshiba and the International Research Institute for Nuclear Decommissioning, or IRID, a government-funded consortium.

IRID and its partners have designed other basic robots, including a "muscle" arm robot made by Hitachi-GE Nuclear Energy, and a different arm robot made by Mitsubishi Heavy Industries, that are designed to approach the debris from the sides of the reactors.

IRID director Hirotsugu Fujiwara said the biggest challenge is to figure out how to remove melted debris. He's keen to finally see conditions inside Unit 3. "I feel we are finally at the starting line of decommissioning," he said.

Scientists need to know the melted nuclear fuel's exact location and understand structural damage in each of the three wrecked reactors to work out the optimum, safest way to remove the fuel.

"The fuel debris will be a challenge," said Dale Klein, a former U.S. Nuclear Regulatory Commission chief, who now serves as an outside adviser to the Tokyo Electric Power Co., the plant's operator. He said it could take six months to a year to obtain necessary data and decide on how to remove the fuel.

"No one in the world has ever had to remove material like this before. So this is something new and it would have to be done carefully and accurately," Klein said.

Japanese officials say they want to determine preliminary removal methods this summer and start work in 2021.

TEPCO is struggling with the plant's decommissioning, which is now expected to cost 8 trillion yen ($70 billion), four times an earlier estimate. Part of that cost will be included in Japanese utility bills.

The 2011 meltdown forced tens of thousands of nearby residents to evacuate their homes. Many are still unable to return due to high radiation levels. 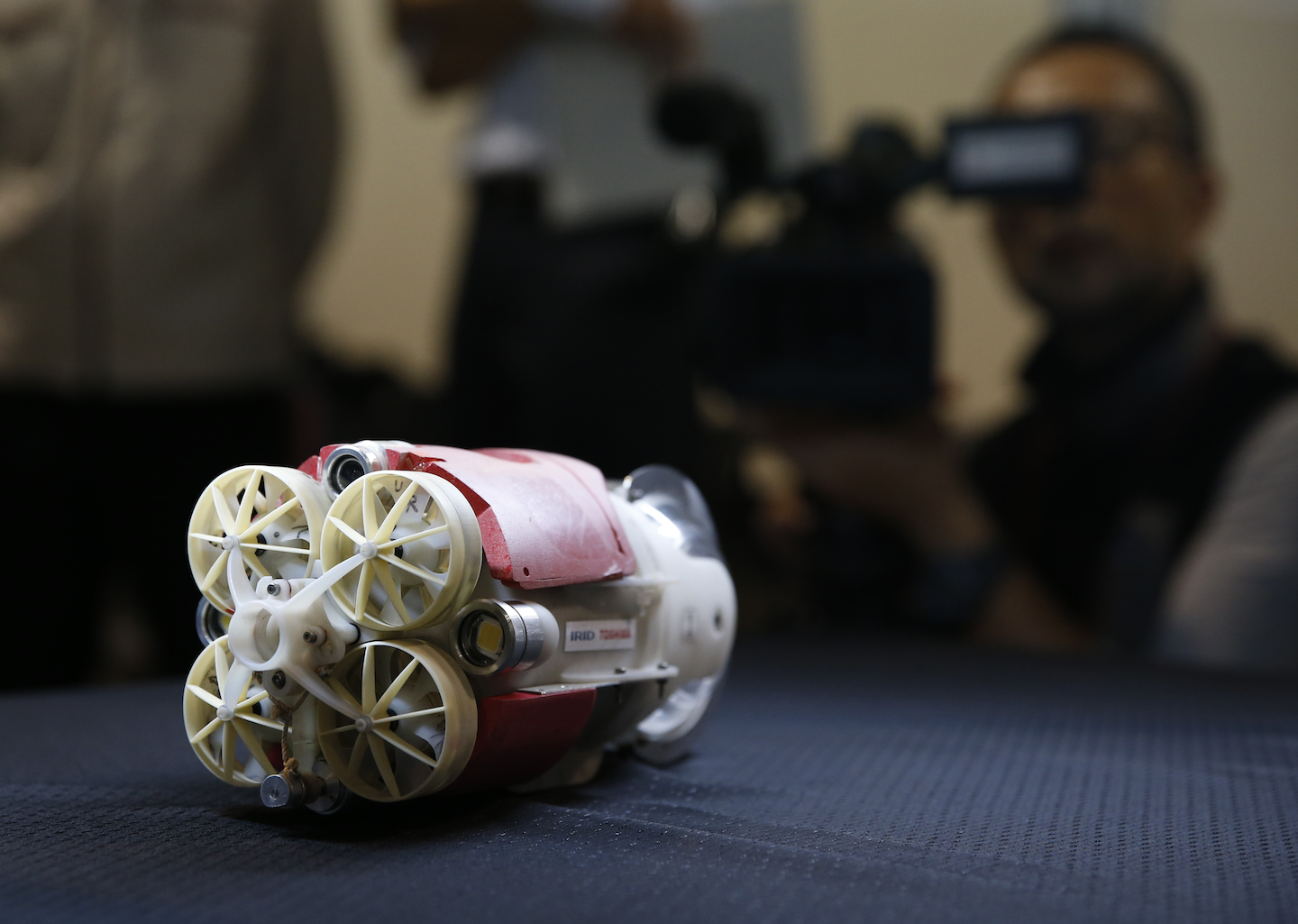 Newly developed robot mockup for underwater investigation for a Fukushima's damaged reactor, is displayed at a Toshiba Corp. test facility in Yokosuka near Tokyo Thursday, June 15, 2017. The robot, which is nicknamed " Little sunfish", co-developed by the debt-strapped Japanese nuclear and electronics company and the International Research Institute for Nuclear Decommissioning, is ready for deployment this summer at the badly-damaged Unit 3 primary containment vessel to assess its damage and locate parts of melted fuel, believed to be submerged under highly contaminated water. (AP Photo/Shuji Kajiyama)
Latest in Industry 4.0