A Jetpack Nears Liftoff, But Creator Fears Dream Is Grounded

Martin Aircraft Co. says it will deliver its first experimental jetpacks to customers this year, a big development for the new technology. But the jetpack is being designed for first responders like firefighters, an outcome that falls short of Martin's vision of a recreational jetpack that anybody could fly.

CHRISTCHURCH, New Zealand (AP) — Glenn Martin was sitting in a bar with his college buddies 35 years ago when they got to wondering: What ever happened to flying cars and jetpacks?

The next day, the New Zealander began looking for answers in the science library, triggering a lifelong quest to build a jetpack. But today, with the company he created seemingly on the verge of triumph, Martin worries his dream is slipping away.

Martin Aircraft Co. says it will deliver its first experimental jetpacks to customers this year, a big development for the new technology. But the jetpack is being designed for first responders like firefighters, an outcome that falls short of Martin's vision of a recreational jetpack that anybody could fly.

The inventor has now left the company he founded. What's more, he says, he's asked for his name to be removed.

"All us guys know what a jetpack's for," he says with a smile at his Christchurch home. "With a jetpack, you save the world and you get the girl. Right?"

Jetpacks have often been portrayed that way in books and movies. They have formed part of humanity's utopian future vision for the past century. Fictional characters from Buck Rogers to Elroy Jetson have used them, and a real jetpack wowed the crowds at the opening of the 1984 Olympic Games in Los Angeles.

Martin, 56, grew up in the South Pacific, thousands of miles (kilometers) from Houston. But he followed the space race avidly.

"I still remember sitting in class and listening to Neil Armstrong step onto the moon," he says. "And I believed, I suppose, that we would all have flying cars and jetpacks and bases on Mars by the time I was an adult."

Storied though they may be, jetpacks have a troubled history. The Bell Aerospace rocket belt, developed in the 1960s, showed it was possible. However, that jetpack couldn't carry much weight and could remain airborne for less than 30 seconds. It was for show, nothing more.

In the mid-1990s, three Houston men decided they'd try to make one. Instead, they made a mess. They fell out over money and their venture ended with an unsolved murder, an abduction, a man in jail and a device that had vanished.

Peter Coker, Martin Aircraft's chief executive, says he believes the best business plan is to make jetpacks for first responders and later for other commercial operators. Once all the supply chains are in place, he says, the company can then turn its attention to building a personal jetpack.

"We are now an aviation company," Coker says. "Before, it was very much the kiwi dream. But you have to take that commercial path."

Glenn Martin's vision still holds true, Coker says: Creating and selling a personal jetpack remains part of what the company is all about.

But Martin doubts the company will ever make one.

When he began his research, he wanted to improve on the Bell rocket belt and make a jetpack that could lift a solidly built guy like himself and a safety parachute, then stay airborne for at least 30 minutes. He decided to use ducted fans, making the word jetpack something of a misnomer.

During the 1980s, he worked in the pharmaceutical industry and built prototypes in his garage. He sponsored two university students to check his math. By 1997 he needed a lightweight pilot, so he enlisted his wife, Vanessa, to make the inaugural flight. It lasted a few seconds.

More refinements eventually allowed the jetpack and its pilot to remain airborne for several minutes and complete controlled turns. Martin took inspiration from reading the Wright brothers' journals; in 2008, he took a prototype to the Experimental Aircraft Association airshow in Wisconsin.

He says he decided to build his jetpack with straightforward components, including a piston engine that uses standard gasoline. He wanted to keep it small enough to be classified as ultralight aircraft, which in the U.S. don't typically require a pilot's license to fly. He figured anyone could learn to fly one after a 3-day course and be kept safe with a built-in parachute which would automatically deploy in an emergency.

But as he sought to raise funds for his fledgling company, Martin says, he began losing control. Along came investors, venture capitalists, and plans for an Initial Public Offering.

The company was listed on the Australian stock market in February last year, and is now majority owned by a Chinese company, KuangChi Science. It's valued at about 180 million Australian dollars ($138 million), showing that investors are taking the concept of a commercial jetpack seriously.

Disillusioned with the direction the company was taking, Martin resigned as a director in June. He still owns a 10 percent stake, which he cannot sell before February.

"I'd picked up the rugby ball and taken it almost to the finish line and felt it was time for other people to do the rest," he says.

Coker, 60, a former officer in Britain's Royal Air Force, has increased the staff from six to 58 since taking the reins three years ago.

By late 2016, he plans for the first customers to begin using the jetpack prototype in real-time operations while providing feedback for further improvements. The company is also developing an unmanned jetpack, which will be used for transporting goods.

The company has signed preliminary agreements with several agencies, including Dubai's civil defense department. Coker says Dubai and others are interested in jetpacks that can rescue people from skyscrapers, or put out fires in them. He says jetpacks can get much closer to buildings than helicopters, and some people are calling them "high-rise lifeboats."

Obstacles remain. The jetpack will need to be cleared by aviation authorities. Martin Aircraft has been working with New Zealand's Civil Aviation Authority on a new category for jetpacks, which Coker hopes will provide a template for other nations.

Coker says Martin has not formally asked for his name to be removed from the company, and he can't recall any informal approach. If the founder made an official request, Coker says, the board would consider the impact on branding and marketing before making a decision.

And Glenn Martin? Yes, he's disappointed he didn't see the concept all the way through. On the other hand, he enjoyed a summer holiday with his family this year for the first time he can remember.

"Jetpacks are a funny thing. They create a lot of passion," he says. "Everybody loves the idea of a jetpack. But the reality is that it's a lot of hard work."

The jetpack may look bulky, but Martin says you don't notice that when you're airborne — an experience he likens to living out his childhood dreams.

"The jetpack is all behind you. You can't see it," he says. "All you can see is your hands. It's like some magic hand has lifted you up, and you're flying." 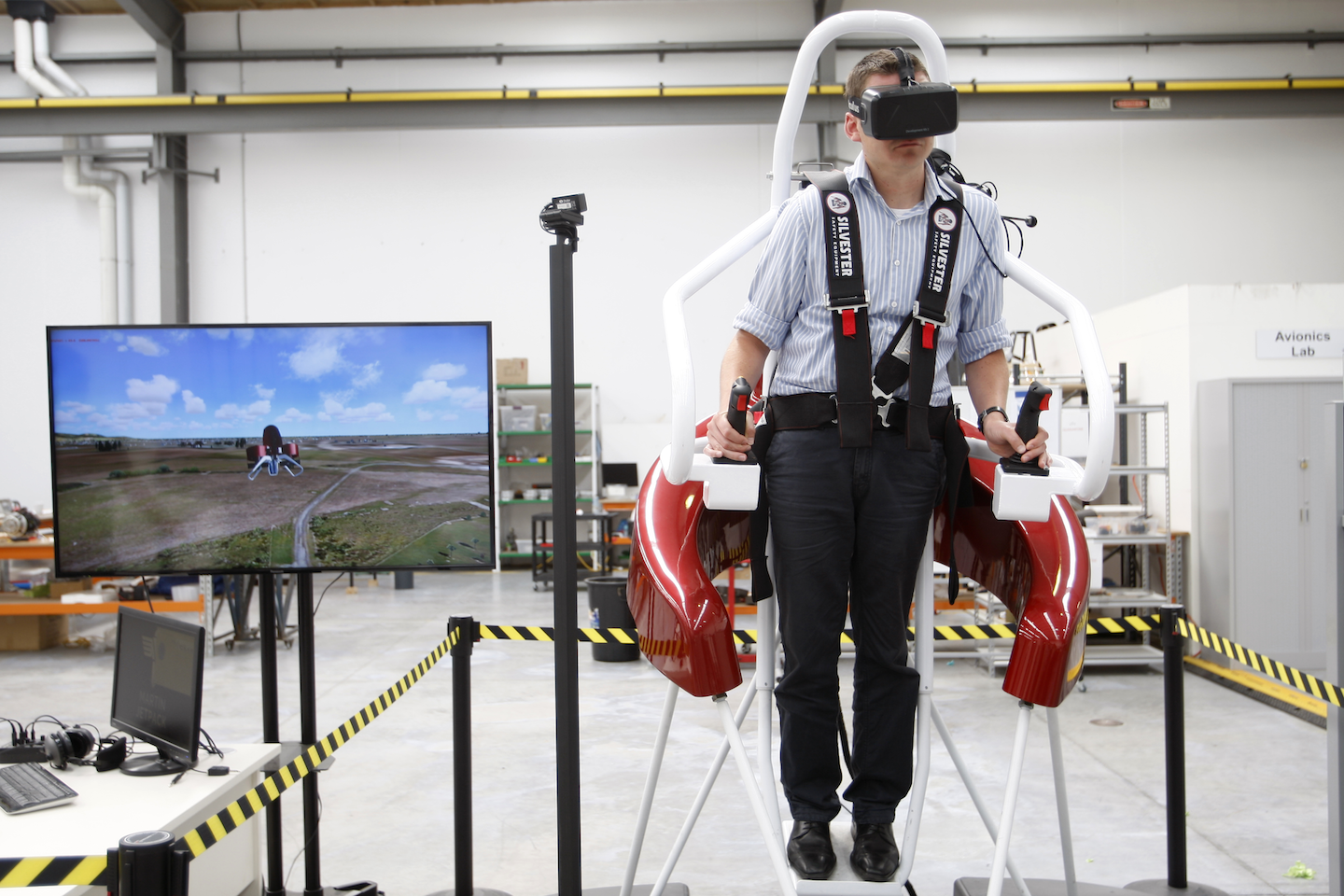 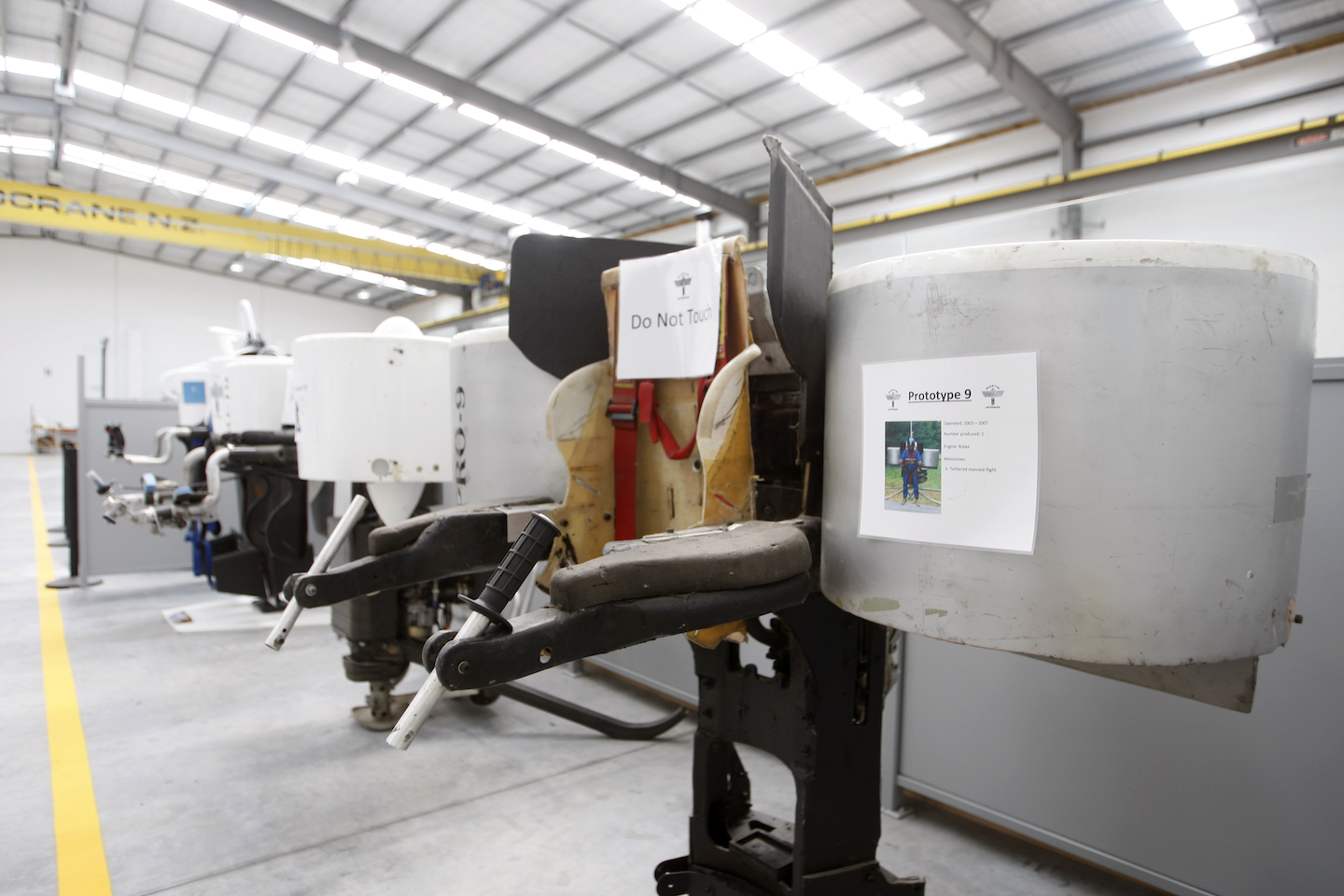 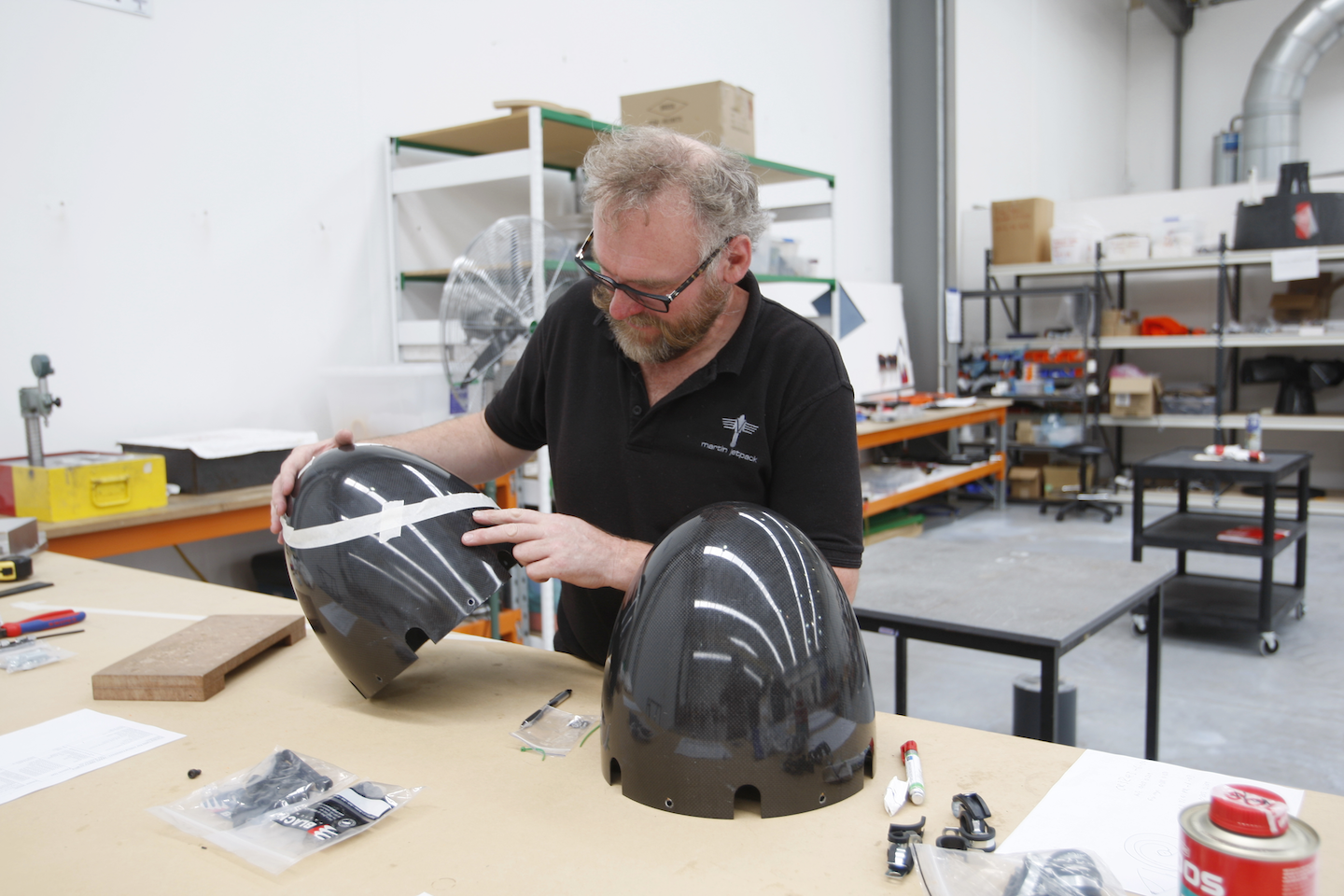 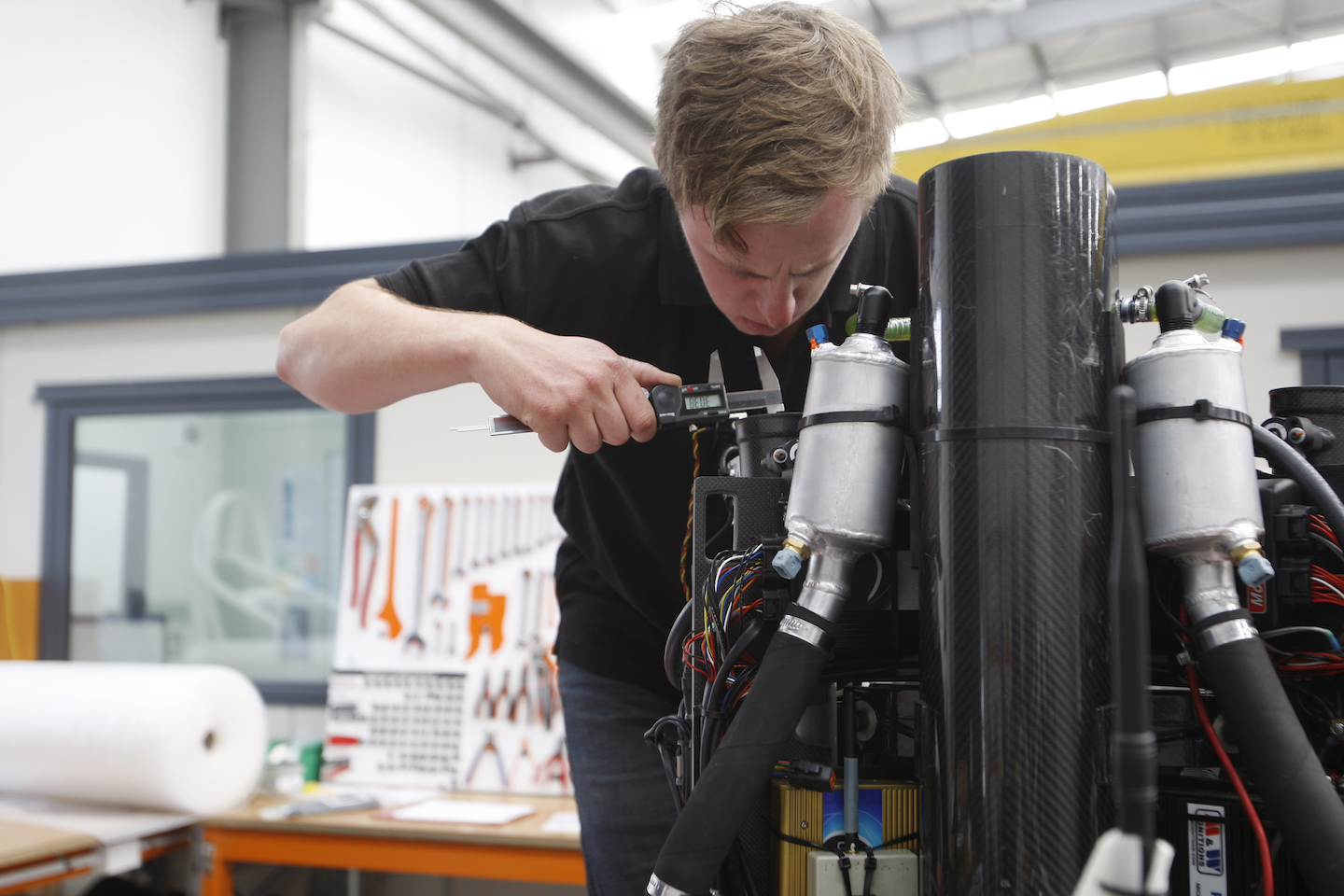 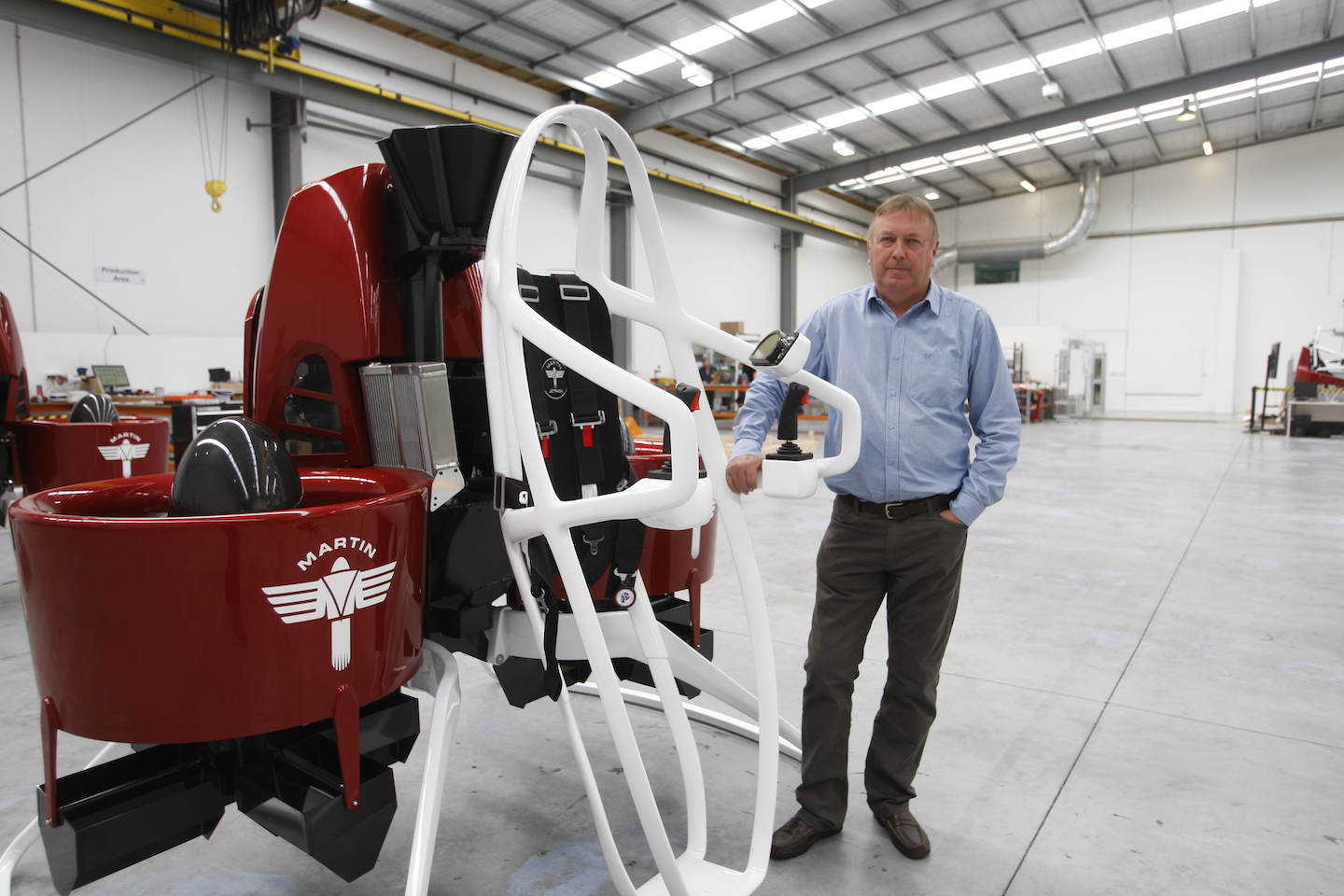