With the release of a pair of high-definition headsets on the horizon, virtual reality will soon be, well, a reality for consumers curious about the immersive medium. 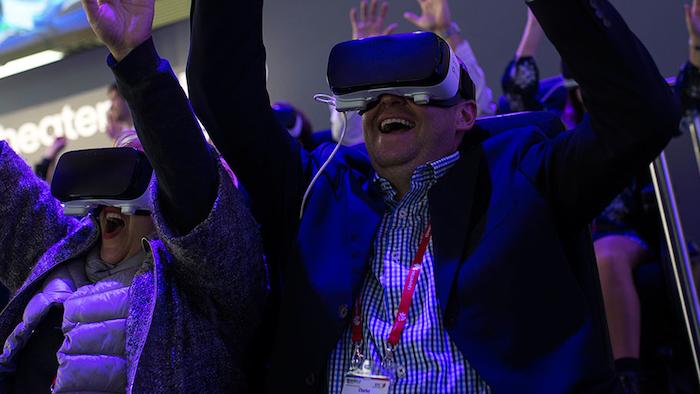 SAN FRANCISCO (AP) — With the release of a pair of high-definition headsets on the horizon, virtual reality will soon be, well, a reality for consumers curious about the immersive medium.

Before the Oculus Rift and HTC Vive debut in a few weeks, VR is back in the spotlight at this week's Game Developers Conference, the 30th annual gathering of the video game — and now VR — industry that kicks off Monday at the Moscone Center.

For the first time, GDC will play host to the Virtual Reality Developers Conference, a spin-off summit dedicated to VR creators learning more about their 360-degree craft. VRDC will feature talks with such titles as "Enabling Hands in VR" and "This is Your Brain on VR: A Look at The Psychology of Doing VR Right."

"It's another example of how VR is legitimate now," said Adam Orth, creator of "Adr1ft," a first-person VR experience set to launch alongside the Rift that transports players inside a stranded astronaut's space suit.

Orth is among the VR creators influenced by traditional games, films and apps who will in attendance at VRDC, confronting issues facing the emerging medium.

"It's still so new, and there are still so many challenges to overcome," said Orth. "For instance, if someone is doing something simple as using a shovel in VR, how would that look and feel? It wouldn't look and feel like it does in a typical game. I'm looking forward to that, the challenge of creating normal things in abnormal scenarios."

Orth isn't alone. A survey of last year's GDC attendees found development of VR projects more than doubled, with 16 percent of attendees currently creating VR content — up from the 7 percent who said they were working on VR in last year's poll.

Regardless of the growing interest in VR, many in the gaming industry — and beyond — remain apprehensive, despite the fact those clunky, nausea-inducing VR headsets of the 1990s have morphed into the sleeker, lower-latency goggles of today.

While 75 percent of developers surveyed believe VR and augmented reality is a sustainable business, 27 percent don't see adoption of VR systems matching the current population of game consoles like the PlayStation 4 and Xbox One.

"It's not like everyone is 100 percent on board," said Simon Carless, executive vice president at UBM Tech Game Network, which organizes GDC and VRDC. "I think people are very interested and excited about it, but we've yet to see the mass adoption it will clearly need to take off."

The first consumer version of the Rift, available March 28, is being sold for $600. The Vive, which comes with a pair of sensors that detect motion in a room, will be released April 5 for $800. They both require high-end PCs in order to work.

The steep price and computing requirements haven't swayed early adopters away from VR. Oculus and HTC both said initial orders for the Rift and Vive systems sold out within minutes. A consumer edition of the lower-powered Samsung Gear VR, a mobile Oculus headset that works with Samsung smartphones, sold out when it was first released last year.

Sony will be next to test the commercial viability of VR. The company is hosting an event Tuesday during GDC where it's expected to announce the price and release date of PlayStation VR, a headset formerly known as Project Morpheus that works in tandem with the PlayStation 4 console, instead of a super-charged PC.

"The commercial release of Oculus, Vive and PlayStation VR is really just the beginning, if this takes off," said Carless. "It's the kind of thing you have to try to be really excited about it. Most people haven't had the opportunity to do that, even though we've been talking about VR for years now. It's going to be a gradual process."