Boeing said it plans to buy renewable energy credits to replace fossil-fuel power at the factory in Washington state where it assembles its 737 commercial airplanes. 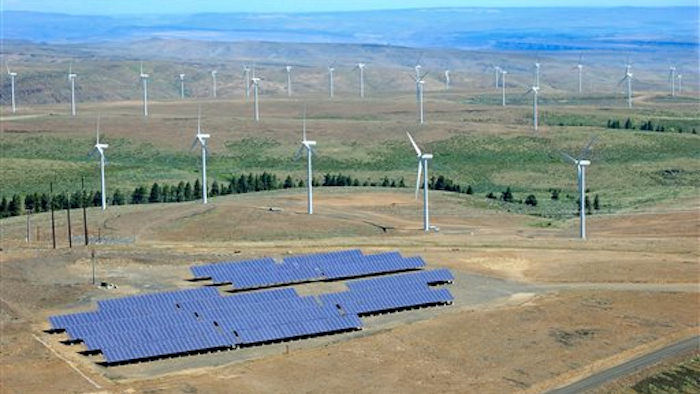 Renton, Washington -- Boeing said it plans to buy renewable energy credits to replace fossil-fuel power at the factory in Washington state where it assembles its 737 commercial airplanes.

The aerospace company and the utility, Puget Sound Energy, said the plan will move the Renton factory near Seattle toward an all-renewable energy mix.

Boeing Co. says it will offset electricity from coal and other fuels by paying a premium to buy wind power credits tied to the Bellevue-based utility's Wild Horse Wind and Solar Facility near Ellensburg.

The utility's energy mix in 2013 was about 50 percent hydro, wind and other renewable sources, according to state figures. Natural gas and coal made up the other half, and that's the portion Boeing plans to replace with renewable energy credits.

"It will cost us a little more in the short term. We think the investment makes sense for the environment, our employees and the community," said Beverly Wyse, vice president and general manager of the 737 program.

Boeing officials declined to say how much more they're paying, or how much energy the factory uses. Boeing assembles 42 planes a month at the Renton site, which includes about 4.3 million square feet of building space.

Energy produced in the region from multiple sources gets pooled to the regional grid, so it's difficult to track the source of a particular electron that ends up being used at a home or a business. So Boeing may still technically get some coal-fired electricity to that plant.

"You can't direct an electron to any one location. It goes to the power pool," said Heather Mulligan with the utility. Renewable energy credits "are a way to basically put some ownership on that green electron at the point of use."

Marc Krasnowsky, a spokesman for NW Energy Coalition that has pushed for more renewable energy use, praised the company for looking at becoming all-renewable.

"They're basically turning their fossil power green, and that's laudable," he said.