Advances in LED technology are helping to create an environment where vegetables can be produced at scale, with higher yields and shorter grow cycles, no matter what climate. 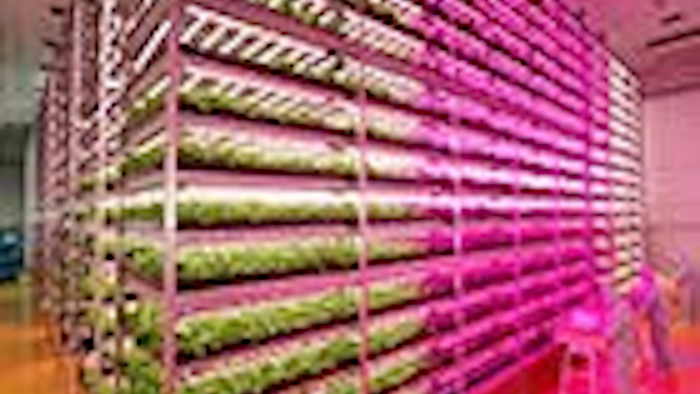 A warehouse full of lettuce might not be the first place you would expect to find the next Industrial Revolution. But follow the LED lights and you’ll discover a glimpse of the future of agriculture — industrial-scale, indoor farming.

Advances in LED technology are helping to create an environment where vegetables can be produced at scale, with higher yields and shorter grow cycles, no matter what climate.

“There will be a revolution,” says Cary Mitchell, horticulture professor at Purdue University. “I think that in a decades time, LED will become the de facto lighting source for controlled-environment agriculture.”

Farming in a controlled environment, whether a greenhouse or warehouse, has long allowed growers to manipulate lighting, temperature and water to boost yields. What LED lighting brings to the equation is a cooler and more energy-efficient way to optimize conditions than the high-pressure sodium (HPS) lamps traditionally found in greenhouses.

Mitchell’s team has found that LEDs can surpass 50 percent efficiency — converting about half of their energy into plant-usable light — versus just 30 percent for HPS lamps. That translates into significant energy savings: it cost four times more to produce the same amount of fruit with HPS lamps than LEDs.

“The fact that these [LED] emitters are so cool — literally cool — and you can put them so close, there’s a tremendous energy savings potential,” Mitchell says.

Shigeharu Shimamura was able to capitalize on such efficiencies when he converted a former Sony semiconductor factory into what might be the world’s largest indoor farm powered by LEDs. With the help of GE fixtures designed to emit light at wavelengths optimal for plant growth, he was able to achieve a 100-fold gain in productivity per square foot over outdoor farming for his lettuce crop.

“By effectively controlling photorespiration and photosynthesis, we not only control night and day, but also provide a better `sleeping’ environment for vegetable’s growth and increase the effectiveness of light,” Shimamura says.

Shimamura got his initial inspiration for launching the indoor farming company Mirai (“future” in Japanese) as a teenager, while visiting a “vegetable factory” at a world’s fair being held in Japan. The technology has come a long way since then, he says. “I believe this marks the beginning of agricultural industrialization.”

Indeed, a whole crop of indoor farming startups has emerged to reap the benefits of the technological revolution, with a focus as much on sustainability as productivity. Chicago-based FarmedHere and Green Sense Farms of Portage, Ind. — two of the largest indoor vertical farms in the U.S. — highlight their role in providing healthy local produce that also benefits the planet.

Still, many vertical farmers haven’t completely converted to LEDs given the price tag, he says, even if they can make up for some of the upfront cost with longer-term energy savings. The economics will likely become more attractive as the technology continues to advance, Mitchell predicts.

One key area of focus is in experimenting with bands of wavelengths — corresponding to different colors — to optimize growing conditions for different plants. Since LEDs produce light from narrow bands within the color spectrum, they can be manipulated to give plants a higher dose of, say, blue light.

“It’s kind of like we’re rediscovering the value of white light — putting back together the solar spectrum, but in a way we can manipulate the crop better,” says Mitchell.

For example, a team of University of Florida researchers is working on a set of LED-based prescriptions for different crops. Kevin Folta, chairman of the university’s horticultural sciences department, says the goal is that “every single plant will have a set of rules for light that will allow you to maximize the presence of the compounds you want.”

While LEDs focusing on specific wavebands aren’t yet cost-effective for commercial use, Mitchell expects growing demand for the technological benefits of the lighting to lead to a greater range of affordable options for indoor farming.

“When economies of scale get to a certain point and mass production starts bringing costs down, this will really catch on,” he says. “This isn’t a flash in the pan — there’s a real trend in this new industry of indoor agriculture.”