Engineers at jet engine proving grounds in Ohio are using a jet engine GE developed for Boeing’s Dreamliner to test engine parts made from a new ceramic super-material. 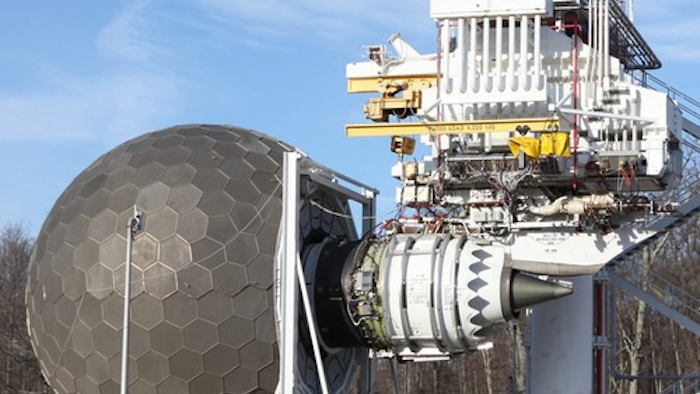 Engineers at jet engine proving grounds in Ohio are using a jet engine GE developed for Boeing’s Dreamliner to test engine parts made from a new ceramic super-material. The material could help pave the way to more fuel efficient planes.

GE Aviation is testing the GEnx jet engine with the ceramic parts at its hard-core testing facility in Peebles, Ohio. The parts include inner and outer combustor liners, high-pressure turbine stage one shrouds, and stage two nozzles. CMC stage one nozzles for the high-pressure turbine will be tested on the second build of this demo engine.

GE has spent the last two decades and over $1 billion developing CMCs. The light material, which has one-third the weight of metal, is made from a combination of silicon carbide ceramic fibers and ceramic resin sealed together during a highly sophisticated process, and further enhanced with proprietary coatings. GE recently opened the first CMC factory in Asheville, N.C.

GE is currently designing CMC parts for the next generation of jet engines like the LEAP and the GE9X. If fact, the GEnx in Peebles is a stand-in for the GE9X, which is still in development and will power Boeing’s new 777X wide-body passenger jet.

GE and its partners will spend more that $500 million on maturing CMC parts this year alone. “The GEnx engine testing campaign, which began in late January, will allow us to demonstrate the functionality and durability of the full suite of CMC hot section components, and help the team lock down the final design for the new GE9X engine by mid-2015,” said Bill Millhaem, general manager of GE’s GE90 and GE9X engine programs.

Although the GE9X isn’t scheduled to enter service until the end of the decade, GE has already received $20 billion (list price) in orders and commitments from airlines like Emirates, Lufthansa, Etihad and others.

But GE isn’t done. All of the CMC components inside the GEnx engine are static, they don’t move. In February, engineers scored an important breakthrough when they for the first time successfully tested rotating parts made from CMCs inside a jet engine turbine. “Going from nickel alloys to rotating ceramics inside the engine is the really big jump,” Blank told GE Reports. “CMCs allow for a revolutionary change in jet engine design.”