The National Transportation Safety Board is considering what caused a Virgin Galactic spaceship to break apart over the Mojave Desert during a test flight 10 months ago, killing the co-pilot and seriously injuring the pilot. 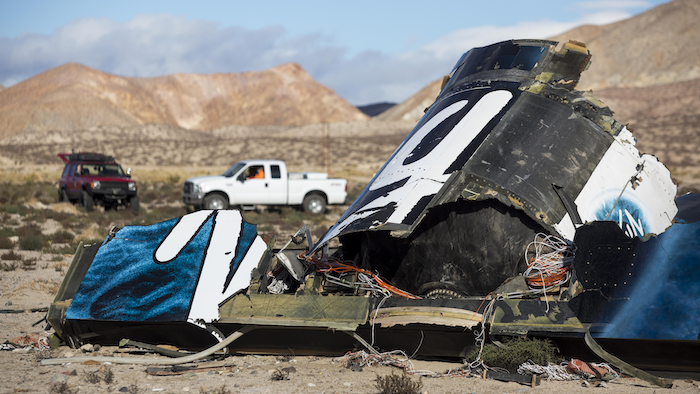 WASHINGTON (AP) — The National Transportation Safety Board is considering what caused a Virgin Galactic spaceship to break apart over the Mojave Desert during a test flight 10 months ago, killing the co-pilot and seriously injuring the pilot.

The agency scheduled a meeting Tuesday to consider the likely cause of the accident. Investigators have been looking into pilot training, the rocket's design and whether mechanical problems played any role.

NTSB officials said early in the investigation that the co-pilot prematurely unlocked equipment designed to slow the descent of the spacecraft during initial re-entry. Simply unlocking the spacecraft's brakes shouldn't have applied them, but investigators say that might have happened anyway and that the resulting stress may have contributed to the spacecraft's destruction.

Scott Pace, director of the Space Policy Institute at George Washington University, said the industry will be looking to see if the NTSB goes beyond the specific cause of the accident in its findings.

"Simply focusing on an immediate cause is usually not enough to understand deeply how to improve safety," Pace said.

Wayne Hale, the former manager for NASA's space shuttle program, said investigators are taught to keep asking why a part failed or why a pilot made a mistake to get to the real root cause of an accident. "If you stop too early, you'll fix the wrong thing."

Virgin Galactic has been proceeding with its plans for space flight and is now building another craft. Company officials have said in recent months that their commitment to commercial spacecraft has not waivered despite the crash and they expect the company to resume test flights later this year. Eventually, the company envisions flights with six passengers climbing more than 62 miles above Earth.

Hale said the accident was unfortunate and has certainly made the suborbital space industry more cautious, but it could yield some positive results.

"We may come out of this with a safer and more robust industry in the near future," Hale said.