NTSB: Company Should Have Prepared For Human Error

The developer of the commercial spacecraft that broke apart during a test flight over California's Mojave Desert last year failed to protect against human error, federal investigators said Tuesday. 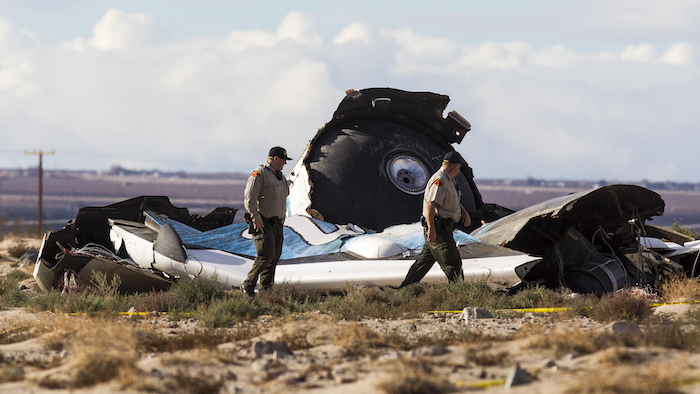 WASHINGTON (AP) — The developer of the commercial spacecraft that broke apart during a test flight over California's Mojave Desert last year failed to protect against human error, specifically the co-pilot unlocking a braking system too quickly and triggering the accident that killed him, federal investigators said Tuesday.

In its finding, the National Transportation Safety Board took pains to make clear that Scaled Composites, an aerospace company that partnered with Virgin Galactic to develop the craft to take civilian travelers to the edge of space, should have had the systems in place to overcome the co-pilot's mistake.

The Federal Aviation Administration was also faulted in its role of determining whether Scaled Composites should get permits for flight tests, and the board recommended several steps to improve the FAA's oversight of private companies involved in commercial space transportation.

The recommendations included assigning FAA staff to individual operators instead of individual flights. That way, they have more time to become familiar with the training and operational controls that they're charged with inspecting. An FAA spokesman said the agency takes the findings and recommendations seriously and will respond in more detail within 90 days.

NTSB Chairman Christopher Hart said he didn't believe Scaled Composites took shortcuts that compromised the spacecraft's safety. Rather, he said, it simply didn't consider that the crew would make the mistake that occurred.

"The assumption was these highly trained test pilots would not make mistakes in those areas, but truth be told, humans are humans," Hart said after the hearing's conclusion. "And even the best-trained human on their best day can make mistakes."

The accident occurred during SpaceShipTwo's fourth rocket-powered test flight. At the time of the accident, Scaled Composites was responsible for SpaceShipTwo's flight test program under a contract with Virgin Galactic.

At the onset of the hearing, investigators told the board that the co-pilot, Michael Alsbury, prematurely unlocked the braking system and the resulting forces caused the brakes to actually be applied even without a command from the crew. The unique braking system includes twin tails that extend on booms from each wing. When activated they rotate upward to create drag, slowing and stabilizing the spaceship for re-entry into the thin upper atmosphere. They are called "feathers" because they function like feathers on a badminton shuttlecock.

The premature applying of the braking system at that speed and elevation created stress that caused the ship to break-up, though Hart said that protections to prevent a similar incident have been put in place since.

"We are confident that the steps they have taken would prevent this accident from happening," Hart said.

The spaceship broke apart over the Mojave Desert during a test flight 10 months ago. The accident killed Alsbury and seriously injured the pilot, Peter Siebold.

In determining the probable cause of the accident, board members were focused on how well officials prepared for the worst. NTSB member Robert Sumwalt said Scaled Composites "put all their eggs in the basket of the pilots doing it correctly."

"My point is that a single-point human failure has to be anticipated," Sumwalt said. "The system has to be designed to compensate for the error."

In a statement after the hearing, Scaled Composites said safety has always been a critical part of the company's culture.

"We have already made changes in the wake of the accident to further enhance safety. We will continue to look for additional ways to do so. We extensively supported the NTSB's investigation and appreciate all of its work to make the industry safer," the company's statement read.

Hart said he hoped the investigation will prevent such an accident from happening again. He said the NTSB learned "with a high degree of certainty the events that resulted in the breakup."

Virgin Galactic has been proceeding with its plans for space flight and is now building another craft. Company officials have said in recent months that their commitment to commercial spacecraft has not wavered despite the crash. Eventually, the company envisions flights with six passengers climbing more than 62 miles above Earth.

Virgin Galactic has collected deposits from 700 people in 58 countries who have put down a deposit of $250,000 to fly into space. The company is not publicly disclosing its timetable for flights.

In a statement issued after the hearing, Virgin Galactic said it has assumed full responsibility for the completion of the flight test program. It emphasized the Scaled Composites was responsible for SpaceShipTwo's flight-test program.

"We remain as humbled as ever by the difficulty of our work and the challenges of space," said Virgin Galactic CEO George T. Whitesides. "To date, only 549 people have gone to space, and we are as passionate and resolved as ever to increase that number."

"It is important that our collective efforts and sacrifices are not in vain but serve to inspire others to make big dreams come true," said Sir Richard Branson, Virgin Group's founder.