Some drones on the market are capable of reaching altitudes as high as 18,000 feet — the start of "class A" airspace where most passenger and cargo airlines cruise. Operators oftentimes don't realize the risks. 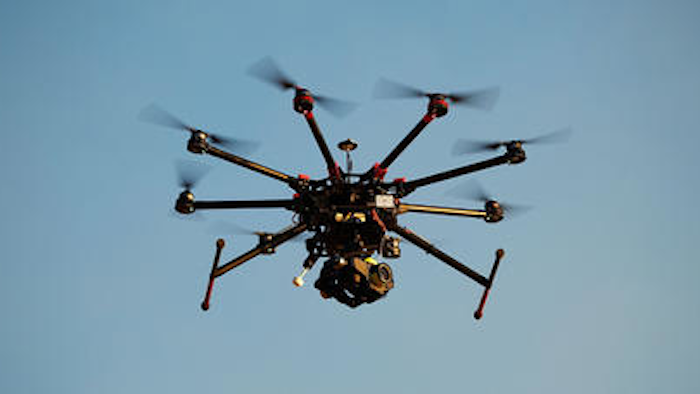 Alarmed by increasing encounters between small drones and manned aircraft, drone industry officials said Monday they are teaming up with the U.S. government and model aircraft hobbyists to launch a safety campaign.

The campaign includes a website — www.knowbeforeyoufly.com — which advises both recreational and commercial drone operators of FAA regulations and how to fly their unmanned aircraft safely. The campaign was announced by the Association for Unmanned Vehicle Systems International and the Small UAV Coalition, both industry trade groups, and the Academy of Model Aeronautics, which represents model aircraft hobbyists, in partnership with the Federal Aviation Administration.

The two industry trade groups also said they plan to distribute safety pamphlets at industry events, and are working with drone manufacturers to see that safety information is enclosed inside the package of new drones.

Retailers say small drones, which are indistinguishable from today's more sophisticated model aircraft, are flying off the shelves this Christmas.

"In just a few days, kids old and young will unwrap presents, and many of them — maybe tens of thousands — will have unmanned aircraft," Michael Toscano, president of the unmanned vehicle association, said in a conference call with reporters. "This technology is very accessible and in very high demand, but information on how to fly safety isn't readily available. That's why we've created this safety campaign."

The FAA is concerned that amateurs are using the drones in a reckless manner, increasing the likelihood of a collision that could bring down a plane or rain debris down on people. The agency has been receiving about 25 reports per month this year of drones sighted flying near manned aircraft or airports, up from just a handful of reports two years ago.

"This is an issue of growing concern," said FAA Administrator Michael Huerta. "The price of unmanned aircraft has come down and this newer and more powerful technology is more affordable to more people, yet many are not familiar with the rules of flying."

Small drones are available today for as little as a few hundred dollars. As of the end of 2013, about 1 million small drones had been sold worldwide for recreational and commercial use, according to industry estimates. Sales this year are expected to significantly outdistance previous tallies. Catalogs like Hammacher Schlemmer and Brookstone have prominently featured small drones this Christmas, while online retailer Amazon is offering more than a dozen different models priced from as little as $30 to nearly $3,000.

"Many of these operators have no aviation history, background or knowledge," Margaret Gilligan, FAA's associate administrator for safety, told a recent forum hosted by the Air Line Pilots Association. "They think they just bought something fun that they just want to fly around. They don't for a moment think, 'I'm entering the national airspace system.' "

Such operators don't intend to interfere with manned aircraft, but "they just don't know what they don't know," she said.

In response to safety concerns, Amazon created a special webpage on it's website with safety information for drone customers. Many small drones can only fly as high as a few hundred feet, which keeps them below most manned aircraft. But some drones on the market are capable of reaching altitudes as high as 18,000 feet — the start of "class A" airspace where most passenger and cargo airlines cruise.

Ben Berman, an airline captain who flies Boeing 737s, told the same forum that "the current situation is out of control."

In September, a New York Police Department helicopter had a near-miss with a drone. The pilots of a regional airliner recently reported spotting a drone 500 feet to 1,000 feet (150 to 300 meters) off the plane's right side during a landing approach to runway 4 of the Greenville-Spartanburg International Airport in South Carolina. The drone was described as the size of a large bird. The pilots of another regional airliner flying at about 10,000 feet (3,000 meters) reported seeing at least one drone pass less than 500 feet above the plane, moving slowly to the south toward Allegheny County Airport near Pittsburgh.

"An education campaign on Amazon.com is not adequate," Berman said. "Yes, if my aircraft goes down and we are mourning something strong will happen, but we can't allow that to happen to me or anybody else."

The near-misses and other close encounters may not be entirely the fault of drone operators. Nicholas Roy, a Massachusetts Institute of Technology professor who has advised Google on drone technology, told a recent House hearing that "the vast majority of small (drones) are basically toy aircraft ... with the same reliability of a toy."