Entrepreneur Builds 'Ghost' Ship for Navy, but Do They Want It?

Inventor Gregory Sancoff thinks the Navy needs a fast patrol boat to protect larger and more costly warships when they're most vulnerable. The Ghost's smooth ride makes it an ideal platform for weapon systems — and for transporting Navy SEALs. 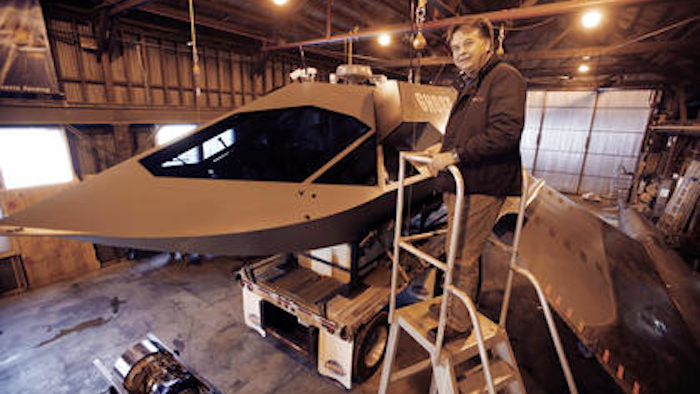 Even on land, the Ghost looks futuristic and fast.

The angular vessel looks like a waterborne stealth fighter. It rides atop underwater torpedo-shaped tubes powered by a pair of 2,000-horsepower gas turbine engines. Gyroscopes keep the ride smooth.

Sadly, Ghost is all revved up with no place to go. The brainchild of a wealthy inventor and entrepreneur, Ghost might never be a familiar household name like Humvee, Apache and Abrams — even if it works as advertised — because its creator built a warship the military isn't convinced it needs.

"It's a revolutionary program," said Gregory Sancoff, founder and CEO of Juliet Marine Systems. "Nothing like this has ever been built by anybody, not even the Navy."

He might be right: The Ghost rides on struts connected to engine assemblies he says take advantage of "supercavitation," traveling underwater inside a bubble of gas. It's a new application of technology that Sancoff insists will make Ghost fast — it's so far hit about 35 mph but Sancoff believes it can approach 60 mph — while staying stable even in rough seas.

But Sancoff has taken the usual step of sinking $15 million into a prototype that he hopes to sell to the Navy, turning upside down a process in which normally the military identifies a need before soliciting proposals and seeking funding.

"The Navy is pretty skeptical of what we've been working on but they're starting to take us more seriously," said Sancoff, whose company operates out of a leased warehouse at the Portsmouth Naval Shipyard.

Sancoff, who as a young man raced hydroplanes, hatched his idea for the 60-foot-long vessel after terrorists using a small boat full of explosives nearly sank the USS Cole in 2000.

He thinks the Navy needs a fast patrol boat to protect larger and more costly warships when they're most vulnerable, like when they're passing through the Strait of Hormuz at the southern end of the Persian Gulf. The Ghost's smooth ride makes it an ideal platform for weapon systems — and for transporting Navy SEALs, Sancoff said.

Supercavitation has been used to produce high-speed torpedoes but Sancoff said he's adapted it for the first time to propel a surface warship. Under his design, dual propellers were moved to the front instead of the rear and underwater ailerons control the vessel, which banks like an airplane when it's turning.

He was so convinced that he created a company and built it.

That sort of entrepreneurial spirit used to drive military innovation but it's no longer the norm in an era of high-tech, costly programs. These days, the Pentagon decides its military requirements and then solicits proposals.

The Navy currently does not have a requirement for such a patrol boat, said Chris Johnson, spokesman for the Naval Sea Systems Command.

But Sancoff's design is at least worth a look, even if it turns out to be unfit for military use, said retired Vice Adm. Pete Daly, CEO of the U.S. Naval Institute, an independent, nonpartisan organization in Annapolis, Maryland.

"The high ground for the U.S. Navy is to take this and evaluate it and learn from it," Daly said. "The propulsion system could be valuable in other applications. You've got to keep that door open to innovation," he said.

Sancoff insists the military has expressed at least some interest in his company, which counts retired Navy admirals and one former U.S. senator, John Sununu of New Hampshire, as board members.

"Any time you're building something so different, you're going to find people that just don't understand it. You've really got to spend some time understanding what's going on here," Sancoff said.

It could be a tough sale.

Even in the best of times, the Navy is predisposed to buy larger, multi-missions ships instead of smaller niche vessels. And the Navy's current budget struggles pose perhaps the biggest obstacle.

Sancoff is also proposing marketing his vessel to other navies and wants to build a new version that'll be a bit bigger. He believes it will be flexible enough for other tasks, like anti-submarine and mine warfare operations.

The Navy's speedy new littoral combat ships are designed to fulfill the Ghost's proposed mission, and Thompson is skeptical that the Navy would be willing to go out on a limb for all-new design for a ship that's too small and light to accommodate heavy armor and bigger weapon systems.

Juliet Marine needs plenty of money, and perhaps a friend or two in Congress, he said, to circumvent an acquisition process that poses obstacles for small startups like Juliet, which has 15 employees.

"I wish them luck," Thompson said. "Entrepreneurship is not always rewarded at the Pentagon."