Environmental groups hailed President Barack Obama's warning Monday about climate change, but said the president's words will soon be tested as he decides whether to approve the Keystone XL oil pipeline from Canada to the Gulf Coast. Obama pledged in his inaugural speech to respond to what he called the threat of climate change, saying, "Failure to do so would betray our children and future generations." 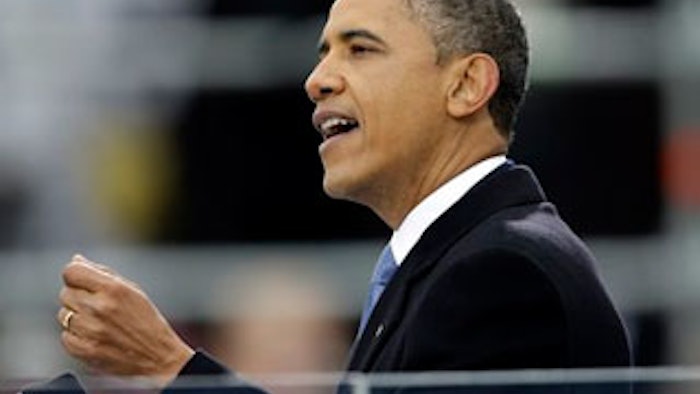 WASHINGTON (AP) — Environmental groups hailed President Barack Obama's warning Monday about climate change, but said the president's words will soon be tested as he decides whether to approve the Keystone XL oil pipeline from Canada to the Gulf Coast.

Obama pledged in his inaugural speech to respond to what he called the threat of climate change, saying, "Failure to do so would betray our children and future generations."

"He finally had the courage to acknowledge the words 'climate change,'" Hoffman said, adding that Obama and other administration officials have frequently used words such as green jobs or clean energy to describe energy policy, instead of the more politically charged term.

"I find it very interesting that in this second term he's just coming right out and saying that climate change is exactly what we're dealing with," Hoffman said.

Obama, in his address, said some people "may still deny the overwhelming judgment of science" that global warming exists and has human causes, "but none can avoid the devastating impact of raging fires and crippling drought and more powerful storms."

"The path toward sustainable energy sources will be long and sometimes difficult. But America cannot resist this transition. We must lead it," Obama said.

He said developing new energy technologies will lead to jobs and new industries. "That is how we will preserve our planet," he said.

Environmental groups said the president's first test on climate change could come early this year as he decides whether to approve the Keystone XL oil pipeline that will carry tar sands oil from Alberta, Canada, to Texas.

Obama blocked the pipeline last year, citing uncertainty over the project's route through environmentally sensitive land in Nebraska. The State Department has federal jurisdiction because the $7 billion pipeline begins in Canada.

Republicans and many business groups say the project would help achieve energy independence for North America and create thousands of jobs.

But environmental groups say the pipeline would transport "dirty oil" and produce heat-trapping gases that contribute to global warming. They also worry about a possible spill.

Alden Meyer, director of strategy and policy at the Union of Concerned Scientists, said Obama's "clarion call to action" on climate change "leaves no doubt this will be a priority in his second term."

After Hurricane Sandy and other extreme weather events, there has been more political momentum than ever to address climate change, Meyer said.

"With presidential leadership, that shift will continue and deepen over the next four years, and meaningful progress on climate change will become an important part of Barack Obama's legacy as president," he said.

Alt and other environmental leaders said they are counting on Obama to set tough limits on carbon pollution from coal-fired power plants and to continue federal investments in renewable energy sources such as wind and solar power.

Obama tried and failed in his first term to get a climate change bill through Congress. Some Democratic lawmakers and environmentalists have pushed for a tax on carbon pollution, but White House officials say they have no plan to propose one.

Scott Segal, an energy lobbyist who represents utilities and natural gas drillers, said Obama "missed the opportunity to remind listeners that climate change is an international phenomenon" that will require international solutions.