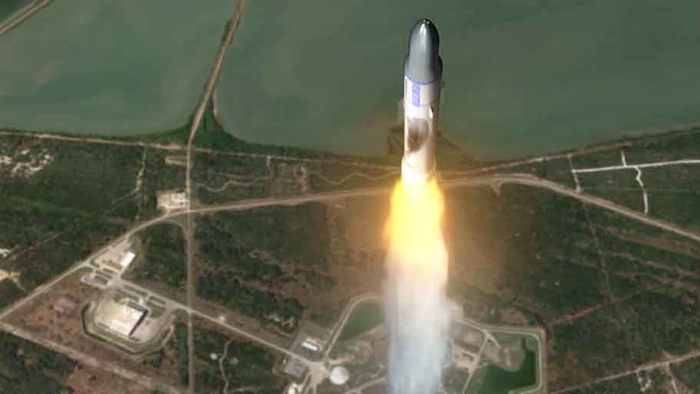 Blue Origin President Robert Meyerson said his company is seeking a production contract with United Launch Alliance, a private company that provides satellite launches for the U.S. government and others. He said the company will locate a production factory for the BE-4 rocket engine in Huntsville upon a contract being signed. According to the company's website, the powerful BE-4 engine is designed to end dependence on Russian-built engines for launching payloads into space.

"Alabama is a proven leader in aerospace manufacturing with the highest-skilled workforce, business climate and leadership that we need to produce low-cost rocket engines that we need to protect the nation, (and) explore the universe," Meyerson said at a news conference in Huntsville.

Blue Origin is considered a leading contender for the contract after it and ULA entered into a partnership last year with the U.S. Air Force to develop a new rocket propulsion system to power Vulcan, ULA's new rocket designed to carry heavy payloads into space.

A spokeswoman for ULA declined by email to discuss the status of the project, saying it is an ongoing procurement.

In making the announcement, Blue Origin said it would invest $200 million in the Huntsville facility and expects to employ up to 350 people producing as many as 30 engines a year.

"Blue Origin, welcome to Alabama," Gov. Kay Ivey said in an announcement Monday. "We thank you for investing in our people."

The Alabama Development office said in a release that the state offered an incentive package of more than $50 million, including a $30 million tax credit for investment and up to $10 million in reimbursements for eligible capital costs.

Ivey said the project would build on the historic role that Huntsville and Alabama have played in the development of the American space program.

The BE-4 is fueled by liquid oxygen and liquefied natural gas to produce 550,000 pounds (250,000 kilograms) of thrust and is intended to be used in both government and commercial missions. The engine is designed for both the Vulcan rocket being developed by ULA and Blue Origin's New Glenn orbital rocket and capsule, which is under development.

One political leader praised the project as a way to give space flight in the U.S. independence from Russian-made rocket engines.

"You are going to do well here, and we're going to replace that Russian engine," Sen. Richard Shelby of Alabama told Blue Origin officials at the event in Huntsville.