A team of researchers from the National University of Singapore (NUS) has invented a novel gel-like material that effectively dehumidifies ambient air to improve thermal comfort. 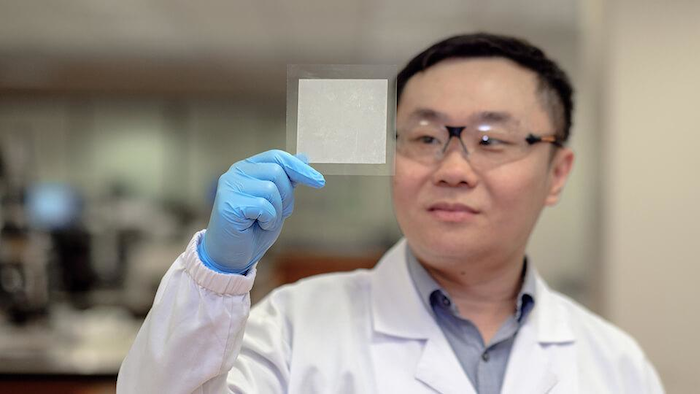 High humidity causes discomfort and makes hot days feel more unbearable. A team of researchers from the National University of Singapore (NUS) has invented a novel gel-like material that not only effectively dehumidifies ambient air to improve thermal comfort, but it also harnesses the moisture in the air for a wide range of practical applications, such as functioning as a sun or privacy screen, conductive ink and even a battery. And all these interesting properties are inherent in the material after water absorption, without a need for external power.

The unique hydrogel is a form of zinc oxide -- a compound found in sunscreen -- in a gel-like state. It can absorb water from the surrounding environment more than 2.5 times its weight and performs at least eight times better than commercial drying agents. It is suitable for both indoor and outdoor applications, and is also cheap and easy to produce.

"Singapore, like many tropical countries, experience high levels of relative humidity between 70 to 80 per cent. In a humid environment, the air is saturated with water and as a result, sweat on our body evaporates more slowly. This causes us to feel hotter than the actual ambient temperature, leading to great discomfort. Our novel hydrogel aims to achieve a cooling effect by removing moisture from ambient air very efficiently," said Assistant Professor Swee Ching Tan from the Department of Materials Science and Engineering at the NUS Faculty of Engineering, who led the research.

"This novel hydrogel performs at least eight times better than existing drying agents, such as silica gel and calcium chloride, in removing moisture from the air -- it can absorb more water, works faster and uses less material. Unlike energy-intensive dehumidifying and air-conditioning systems, this hydrogel does not require electricity to operate. It can be easily coated onto walls, windows and even decorative items (such as a sculpture) to perform the dehumidifying function," Tan added.

Hydrogels are materials which contain large amounts of water and are commonly used in contact lenses, wound dressing and personal care products. Recently, hydrogels are also used for biomedical applications, such as tissue engineering and drug delivery. However, the ability of hydrogels to absorb water from surrounding air has not been well explored.

The novel hydrogel developed by the NUS Engineering team extracts water molecules from surrounding air directly, and reduces relative humidity in a confined space from 80 per cent to 60 per cent -- within the thermal comfort zone -- in less than seven minutes.

This material is suitable for reducing relative humidity in both indoor and outdoor environments, such as in hospital wards and classrooms without air conditioning, as well as in parks and bus stops.

Tan explained, "Moisture in the air is an abundant resource, but there are few attempts to harvest and put it to good use. When our novel hydrogel absorbs water, we observed that it displays interesting optical, electrical and electrochemical properties. This opens up a wide range of useful applications."

After taking in water from the environment, the novel hydrogel becomes opaque and reduces infrared transmission by about 50 percent. This translates into a reduction in ambient temperature by more than seven degrees Celsius. Hence, the hydrogel can be used as a smart window material to block off the heat from natural sunlight while doubling up as a privacy screen. When used together with air conditioners, building or home owners could enjoy savings in energy cost as the cooler ambient air will require less electricity to chill it to the desired temperature.

Another interesting application of the hydrogel is to function as a conductive ink on printed circuit boards commonly found in electronic devices. The gel-like nature of the material makes it highly attractive for flexible electronics. The hydrogel can be erased easily with common solvents such as vinegar, so that the circuit boards could be reused. This would help to cut down electronic waste.

The research team also discovered that the hydrogel can generate about 1.8 volts of electricity -- similar to the AA battery -- which is sufficient to power devices such as a small digital clock. As such, the material may also be used as an emergency power source in situations where there is no sunlight or electricity supply.

These research findings have been published online in the scientific journal Energy & Environmental Science on May 24, 2018.

The development of the novel hydrogel is supported by NUS and the Singapore Ministry of Education. Following the promising results of using the hydrogel to significantly reduce relative humidity, the research team, with support from the NUS Industry Liaison Office, has received substantial funding from Temasek Foundation Ecosperity to test this novel application on a larger scale in both indoor and outdoor spaces.

The NUS research team has filed a patent for their invention, and the researchers will conduct more studies to further advance the application of the different properties of the novel hydrogel.