Battling The Amazon Effect, Manufacturers Embrace The Role Of Retailer

Responding to the “Amazon effect” and today’s consumer demands, manufacturers are reprioritizing and focusing their technology investments on inventory optimization solutions (43 percent) and integrated planning and execution technologies (41 percent). 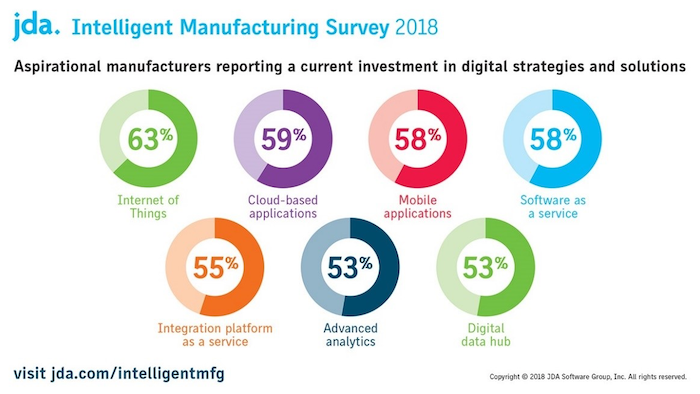 Responding to the “Amazon effect” and today’s consumer demands,  manufacturers are reprioritizing and focusing their technology investments on inventory optimization solutions (43 percent) and integrated planning and execution technologies (41 percent), according to findings from the 2018 Intelligent Manufacturing survey conducted by JDA Software, Inc. The survey findings suggest manufacturers are embracing a new retail-like role and willing to cater to both consumer needs and the competitive direct-to-consumer space.

Additionally, nearly a third (31 percent) of manufacturing respondents revealed a commitment to integrated planning, wherein their long- and mid-term planning process is integrated with tactical execution through a single, connected technology accessed by users across the supply chain function. A key part of being able to meet consumers’ changing needs is based on how well companies integrate sales and operations planning (S&OP) with sales and operations execution (S&OE). On this front, two-thirds of manufacturers are falling behind.

“The Amazon and Alibaba effect have significantly compressed consumer order fulfillment delivery time expectations.  Now, more than ever, planning and execution processes must be more tightly coupled. Yet even while our data shows a portion of respondents understand the importance of prioritizing both short-term execution and strategic long-term planning, too often we see manufacturing companies focused on one and not the other and it’s limiting the value of their planning efforts,” said Fred Baumann, group vice president, industry strategy, JDA. “Incorporating real-time data inputs across both the planning and execution horizons can further bolster an integrated approach. We found that, as a result of implementing supply chain digitalization strategies or technologies, the subset of respondents who follow an integrated S&OP and S&OE approach reported benefits such as greater profitability (61 percent), increased customer service levels (49 percent) and reduced spend (48 percent).”

The Path to Digital Maturity

Another critical component for manufacturers to address when embracing the role of retailer is supply chain maturity. Today, there are just about as many “predigital” manufacturers (18 percent) as there are digitally mature manufacturers. However, while only 18 percent of respondents say they’ve reached digital supply chain maturity, nearly twice as many respondents (35 percent) anticipate they will get there within two to three years. The question is, what are they doing to make that happen, and will they ultimately be successful in catering to consumer needs?

“Supply chain digitalization is no longer a ‘nice to have.’ It’s a strategic mandate and a dramatic differentiator that drives revenue and market share growth. The companies that are investing in their supply chain today, that have support from their leadership teams, and those that are positioning the supply chain function as a key point of differentiation – these are the companies that will excel and achieve profitable business growth,” said Baumann. “We see 35 percent of survey respondents aspiring to reach digital maturity in the next two to three years, but to achieve that goal and to be equipped to successfully go up against Amazon, these manufacturers will need to make digitalization a priority now.”

Sixty-five percent of this aspirational group (i.e., those who are targeting a two- to three-year digital transformation benchmark) are on-track, reporting that supply chain digitalization is a “major priority” for their organization in 2018. In addition, nearly half (47 percent) have realized the importance of integrated S&OP and S&OE processes; within 12 months, 44 percent are planning to enable a connected, financially-led S&OP and a comprehensive constraint planning S&OE process. Aspirational manufacturers have also reported a current investment in digital strategies and solutions (Figure 1 below). 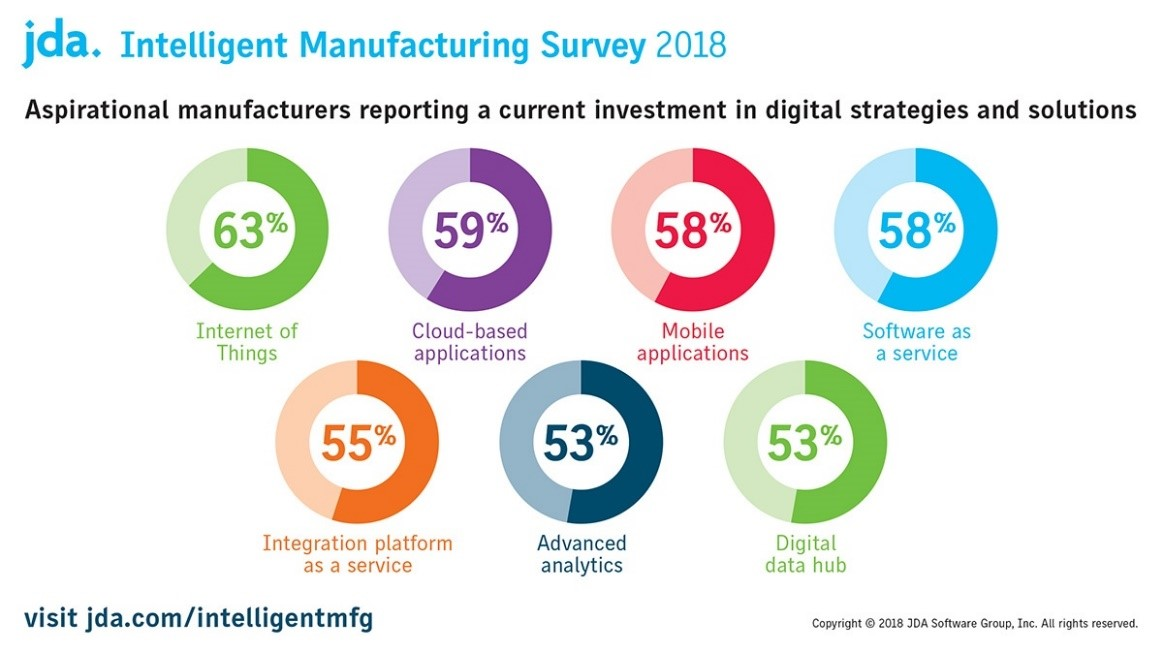 Given the business benefits linked to supply chain digitalization, such as greater profitability (49 percent), increased customer service levels (38 percent), reduced spend (38 percent) and increased competitive abilities (35 percent) – all of which are critical in keeping up with consumer demand – the fact remains that companies opting to put digitalization on hold for another 12 to 36 months will fall behind in more ways than one.

Gearing Up to Compete and Co-exist with Amazon

As consumer needs continue to shift at a rapid rate, retailers are feeling the brunt of the impact. This pressure to respond to shopper behaviors, however, is also felt upstream, prompting manufacturers to reevaluate their supply chain operations. Digital collaboration with traditional retail channels continues to be an area of focus to improve efficiency and profitably respond to consumer needs. Additionally, to retain top talent, the survey found that 55 percent of manufacturers are committed to cross-training employees across all supply chain needs, and building a true center of excellence.

Further, in direct response to the rapidly expanding influx of digital data available from sources such as the Internet of Things and social media, news, events and weather, 78 percent of respondents plan to invest in new talent over the next 12 months to better utilize these insights. To attract top talent, respondents are embracing mobility in the workplace (55 percent), establishing supply chain as an elite organization within their company (42 percent), and adopting cloud solutions specifically for increased business focus (36 percent).

JDA collected responses from 271 U.S.-based professionals across the manufacturing and wholesale/distribution industries in February 2018 via a third-party provider to determine the findings of its 2018 Intelligent Manufacturing survey. Fifty-two percent of respondents are from companies with global operations, and hold positions in IT (48 percent), manufacturing (37 percent) and operations (7 percent), and the majority are either a manager (37 percent) or a director or above (28 percent).