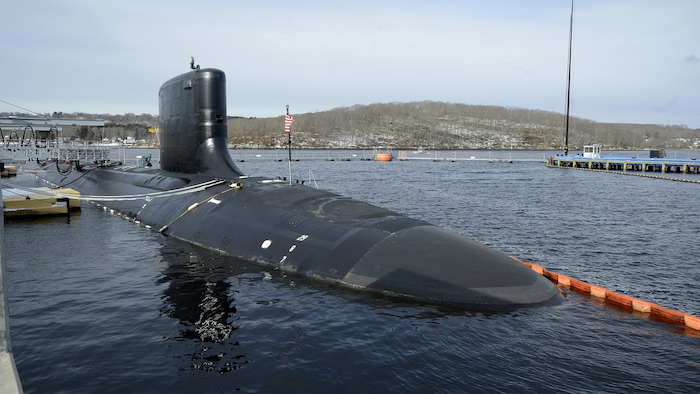 The U.S. Navy's newest attack submarine, the USS Colorado, joined the fleet Saturday in a ceremony at Connecticut's Naval Submarine Base.

Navy Secretary Richard Spencer says the submarine is a "marvel of technology and innovation." U.S. Sen. Michael Bennet, a Colorado Democrat, said the people of Colorado are remarkably proud this submarine will silently protect the nation's interests.

Annie Mabus, the daughter of former Navy Secretary Ray Mabus, gave the order to bring the ship to life before the crew boarded the vessel at the end of the ceremony, which is a Navy tradition.

The 377-foot-long sub weighs about 7,800 tons submerged. It can fight submarines and surface ships, conduct surveillance and deliver Special Operations troops. It has two large tubes that can launch six Tomahawk missiles each.

It's the first attack submarine where sailors use an Xbox gaming system controller to maneuver the photonics masts, which replaced periscopes, according to Cmdr. Reed Koepp, the Colorado's commanding officer. Other submarines have joysticks.

Koepp leads 130 men. Women serve on submarines but they haven't been assigned to the Colorado. One-fifth of submarine crews are integrated.

It took submarine supply businesses nationwide and thousands of shipyard employees in Connecticut, Rhode Island and Virginia to build the Colorado, the 15th member of the Virginia class of submarines.

Attack submarines are built in a partnership between General Dynamics Electric Boat in Connecticut and Newport News Shipbuilding in Virginia. They cost about $2.7 billion apiece.

Joseph Walsh, who oversees the Virginia-class program at Electric Boat, said building the Colorado over the past five years was an incredibly complex task that required a team effort between the shipbuilders, crew and the Navy.