“For manufacturers, the potential benefits are enormous.” 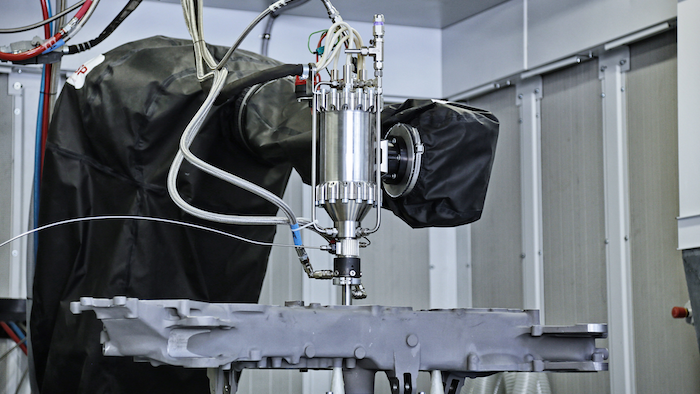 A few years ago, scientists working in GE labs in upstate New York came up with a cool idea for fixing broken parts. Literally. Calling the approach “cold spray,” they shot tiny metal grains from a supersonic nozzle at aircraft engine blades to add new material to them without changing their properties.

Anteneh Kebbede, manager of the Coatings and Surface Lab at the GE Global Research Center, who helped developed cold spray, said the technology can build whole new parts with walls as thick as 1 inch or more. “For manufacturers, the potential benefits are enormous,” Kebbede says. “Imagine being able to restore an aging part to its original condition with a tool that looks like a spray gun.” It is “like a fountain of youth for machine parts.”

GE engineers have already taken a dip. Earlier this year, engineers at the GE Aviation subsidiary Avio Aero started testing the technology in Bari, Italy. Last month they used it to repair the first part: a gearbox from the world’s most powerful jet engine, the GE90.

The milestone was an important one. Cold spray, like 3D printing, is one of several additive manufacturing methods that build parts from the ground up by adding material to them, rather than cutting it away.

But even in the high-tech additive family, cold spray is a rare species. Most 3D printers for metals use lasers to heat up powdered titanium, and other metals, and fuse them to build new parts layer by layer. That technique works well for printing new components directly from a computer file. But heating up an existing part can alter its crystalline structure and mechanical properties. “When you heat up metal and then cool it again, it changes in the same way powder snow can become a sheet of ice after a warm spell,” said Gregorio Dimagli, repair development manager at Avio Aero.

At Bari, the cold-spray process happens in a metal chamber the size of a walk-in refrigerator. The chamber holds a robotic arm with an attached supersonic nozzle that sprays metallic powder particles, as small as 5 microns, onto the piece that needs to be fixed. They hit the surface with so much energy they form a diffusion bond with the part. “Every single metal particle from the powder-charged gun attaches to the part of the component for reconstruction or repair due to the effect of the kinetics,” explains Giulio Longo, the lead repair development engineer in the Bari laboratory.

There are other differences. While traditional 3D printers build parts from computer files, the cold-spray machine uses digital scans of actual jet engine parts to accurately reconstruct the broken part.

The work happening at Bari is the result of a seven-year partnership between Avio Aero and the Polytechnic University of Bari. At the Apulia Repair Development Center, located on the Bari campus, GE engineers work with professors and experts in mechanical engineering to create new ways to build, maintain and repair aircraft parts.

As they develop best practices for these new technologies, expect to see additive manufacturing become a more important part of aircraft engine repair in the coming years.

Advances in technology are making the transition from reactive to predictive maintenance strategies easier to attain.
Jan 23rd, 2020
Follow Us
Most Recent