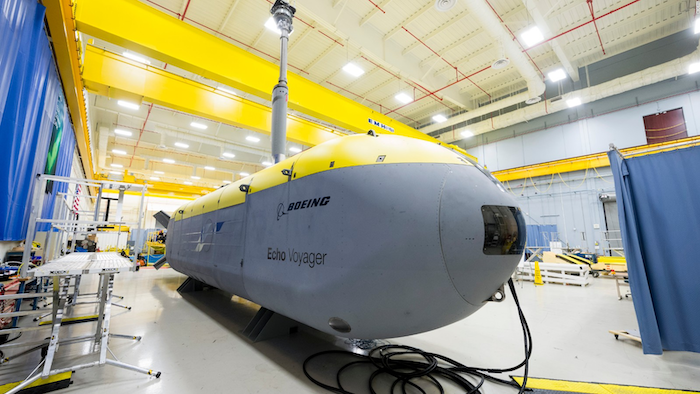 The waters of Southern California are about to house an unlikely visitor. Initial sea trials for Boeing’s extra large unmanned undersea vehicle (XLUUV), the 51-foot Echo Voyager, are currently underway.

Boeing engineers are checking a variety of functions, including autonomy, communication systems, propulsion, systems integration, and battery operations. These components will be put to the test during a series of surface swims and shallow dives.

The Echo Voyager graduated from its previous staging area held in Boeing’s Huntington Beach facility. A large pool was used to develop the UUV before its trek to the Pacific. You can view the earlier trials in the video below.

“Unlike an aerial vehicle, or satellite where you can communicate with it when it’s in trouble, with subsea vehicles you can’t do that because of the communication,” says David Flowers, Boeing Program Manager of XLUUV Development. “So autonomy is that much more important. The vehicle has got to understand what to do if it gets in trouble, make rule-based decisions, and act in a way that allows it to stay safe and complete its mission.”

This massive robotic sea-dweller is in support of the U.S. Navy’s Extra Large UUV program. The XLUUV initiative aims to create effective, cost-effective underwater systems that meet the demanding advancements of today’s technologies.

These current open-water studies are leading up to the underwater robot’s first autonomous long endurance swim. To watch the UUV’s current progress, check out the Echo Voyager’s first deep sea adventure in the video below.