Photos Of The Day: A Swooping Robotically Fabricated Room

The building was created with 230 unique, robotically milled wooden panels. 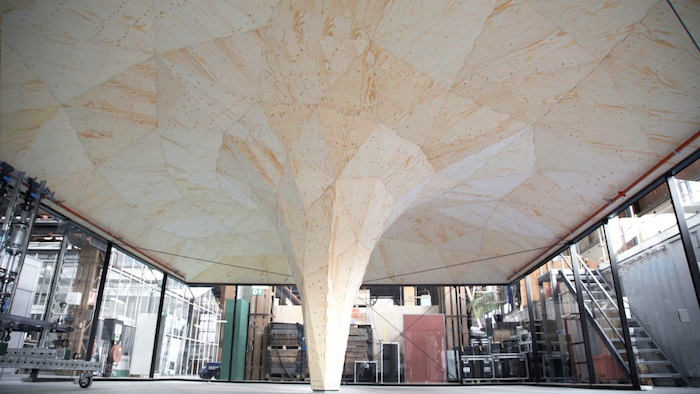 This room, known as the SkilledIn Office, represents a first for the Netherlands: It’s the country’s first robotically fabricated building. At least that’s the claim of its designers.

The company behind all of this, Studio RAP, relied on humans to assemble the structure, but the screws were pre-drilled by the robot.

“It’s the first project in which we show the scalability of industrial robotic fabrication toward an architectural scale,” says the company. In an interview with Dezeen, studio co-founder Wessel van Beerendonk also notes, “The unique shape of the vault is distilled out of digital form-finding methods.”

Digital form-finding, to put it simply, uses computer simulations to determine an object’s performance information before that object is created, and use that information in the design — form follows function. This way, the design will always hold up its end of the bargain and shouldn’t require re-evaluation.

Although the robotics concept isn’t entirely new — as robotics have been used on assembly lines to some extent for decades and earlier this year 3D printers built walls and houses — it marks another step forward in using new technology to push the boundaries of construction and architecture.

Do you think digital form-finding is the future for construction? Is this process unique enough to mark an advancement in technology? Comment below or tweet me @MNetKatie.