Toyota is the world's top automaker in terms of global vehicle sales. 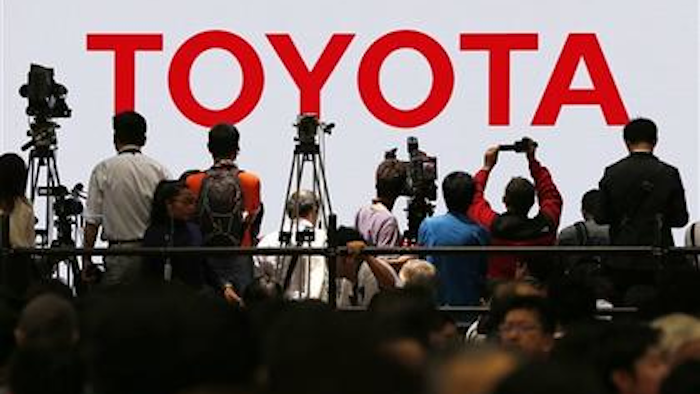 The company said its earnings for the July-September quarter benefited from cost cuts and a favorable exchange rate. The profit was up from 539 billion yen the previous year, but a little short of the 615 billion yen ($5.1 billion) average forecast in a FactSet survey of analysts.

Toyota sold 42,000 fewer vehicles at 2.48 million vehicles in July-September compared to the same period last year, with sales falling in Europe and Asia, including Japan. But the value of its sales increased 8 percent to 7.1 trillion yen ($58.5 billion), showing the weak yen impact.

The cheap yen, a boon for Japanese exporters such as Toyota Motor Corp. because it boosts the value of overseas earnings, added 160 billion yen ($1.3 billion) in operating profit for the quarter. The yen traded above 120 to the dollar during the quarter compared with 101-102 for much of the same quarter last year.

Toyota, the world's top automaker in terms of global vehicle sales for the last three years, was outpaced by Volkswagen AG for the first half of the calendar year. But it regained that crown after the first three quarters, thanks partly to the scandal over emissions tests unfolding at the German rival.

Toyota's initiative to make common some of the basic parts on which its sprawling range of models is built, called Toyota New Global Architecture, helped to reduce costs.

The new Prius is the first model to be completely manufactured under that system. The fourth-generation Prius goes on sale in Japan in December, and rolls out in the U.S. and other markets early next year.

Recently, Toyota outlined an ambitious plan to produce almost only hybrid and fuel cell cars by 2020.

Toyota is revving up growth after weathering the 2011 tsunami disaster in northeastern Japan that crimped production, as well as massive recalls, especially in the U.S.

After the recalls, President Akio Toyoda had temporarily halted expansion to focus on quality controls, worker training and enhanced efficiency at existing plants.

Toyoda was ranked No. 28 in a list of the world's most powerful people compiled by Forbes magazine. He was the top ranked Japanese in that list, above the nation's prime minister who was No. 41. The list was released Wednesday.