Saving A Life With 3D Printing

Dr. Glenn Green and Scott Hollister came up with the solution to save a young boy's life: use 3D printing to build small splints that would help keep his trachea open until it was strong enough to do so itself. 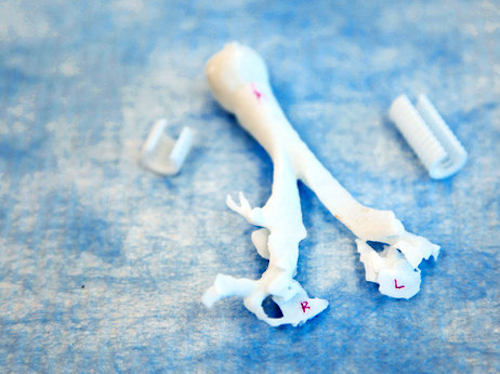 Additive manufacturing — better known as 3D printing — is all the rage among enthusiasts, and is already being used by some of the biggest companies in the world to better design and develop their latest products. There’s a history of success in the medical world as well, because there are times when a patient’s body requires a uniquely-designed device — a process that just isn’t possible with old manufacturing technologies.

Last week, NPR reported on a heartwarming story about the recovery of a young patient due to 3D-printed splints. Garrett Peterson was born with a condition known as tracheomalacia, which meant his trachea was so weak that it was very susceptible to collapsing during the most routine of acts. The collapsed trachea would leave him unable to breathe, and his mother reports watching him turn blue many times while waiting for hospital staff to help reopen his windpipe. The condition has meant that in this first 16 months of life, Garrett had never been able to leave the hospital.

Dr. Glenn Green, who works out of the University of Michigan, teamed up with Scott Hollister, who is a biomedical engineer at the university’s 3-D Printing Lab. Together, they came up with the solution: build small splints that would help keep Garrett’s trachea open until it was strong enough to do so itself. First, they had to take a CT scan of Garrett’s windpipe in order to build a 3D replica of it. That allowed them, in turn, to design the splints — small flexible tubes designed to fit around the windpipe and prop it open permenantly.

During an “Ask Me Anything” session on Reddit, Hollister said Garrett’s splint has “an intricate spiral design that would have been very difficult to make using other processes like injection molding. 3D printing was critical to make this design. Also, because we are making customized devices based on patient anatomy, 3D printing made it possible to modify the design and build it in a day and a half.”

Even with the splints printed, Green and Hollister almost weren’t able to see their efforts through — the FDA hadn’t approved the plan for safety or effectiveness, as it does with other medical devices or medications. Luckily, Green and Hollister were able to secure an emergency waiver, because at that point, it was a life-or-death situation — by the time he went into surgery, one Garrett’s lungs was completely white.

Green said Garrett “would have died without intervention. Unfortunately, we have had other potential candidates that have died before we could.”

Green hopes to expand this type of design and surgery in the future, but the FDA will likely remain a major roadblock along the way. In Garrett’s case, everything worked out for the best, but it’s a signal that the agency will likely need to deal with, quite soon, the possibility of more medical devices being custom-made for a patient’s unique needs.

On the FDA issue Green and Hollister said, “3D printing will be a challenge for the FDA as you obviously can make custom implants and can readily change design. This raises issues about how to implement FDA quality systems requirements (QSR). Also, how do you verify and validate such processes? These are challenges that we face and will require new approaches in regulatory science.”

With additive manufacturing technology becoming more accessible and cheaper every year, one can easily envision a time when every hospital has one on-hand. Hollister says that the materials and machine time only cost about $100, although the R&D and regulatory expenses are in the thousands.

NPR says that Garrett is doing better than ever thanks to the 3D-printed splints.